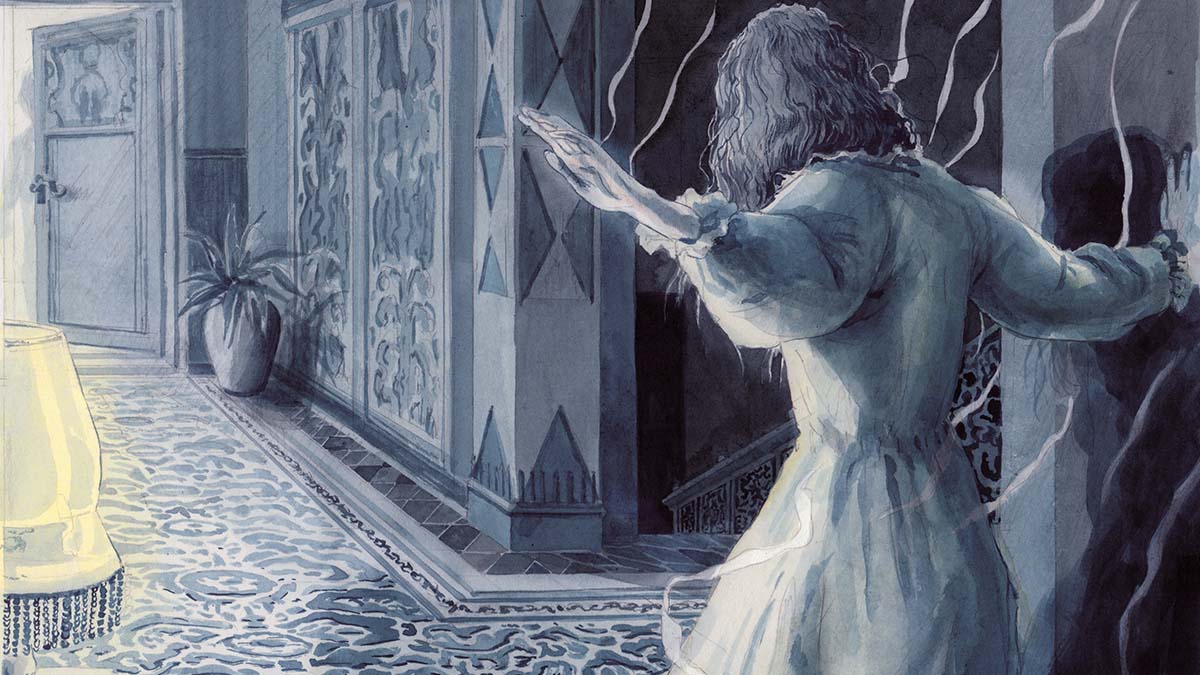 Shirley Jackson’s 1959 novel ‘The Haunting of Hill House’ is a classic of the American gothic horror genre. In recent years, it was roughly translated into a television series for Netflix.

The story centres around a mysterious and creepy old house which has a grim and tragic history. Tenants come and go, never staying long, even assuming they get out alive. One summer, Dr John Montague hires the house in order to conduct his own investigations into the alleged paranormal activities that occur there. He invites along for a week a select group of people who have connections to the house or experience of ghostly activity. This includes the caddish Luke, who stands to inherit the house, and Theodora, a vivacious young artist.

The reader’s experience of Hill House and the events that occur inside its walls are told through the eyes of Eleanor Vance, an introverted and put-upon young woman who is only too glad to liberate her sister’s car and drive off into what for her is an escape from reality.

There are several tropes of the haunted house genre that Jackson skilfully deploys. Firstly, the housekeeper Mrs Dudley barely says anything beyond a few stock phrases, primary of which is her reminder to anybody who will listen that she will not stay in the house after dark. It is almost as if the dreaded action of being in the accursed house is enough to contend with, so she can only focus on not being there when the worst of the paranormal activity is said to happen. Secondly, the architecture of the place is baffling. Residents find it difficult to locate particular rooms or remember their way back to them. Views from the windows don’t seem to match the same views from the grounds. Finally, there is an icy cold area in the cellar that is experienced by all of the inhabitants, but which doesn’t register any differently on a thermometer.

So far, so familiar. But Jackson’s success with ‘The Haunting of Hill House’, generally regarded as being up there with Henry James’ ‘The Turn of the Screw’ for all-time great ghost stories, lies in her literary flair. There is a subtle use of repetition, not just in what characters say, but in thoughts that occur to Eleanor. “Journeys end in lovers meeting,” occurs a dozen or so times throughout the novel.

If you enjoy spine-tingling chills in horror novels, then ‘The Haunting of Hill House’ delivers. There is the appearance of a ghostly dog at night-time, and many loud but inexplicable creaks and bangs. Much more effectively, Jackson builds each chapter into a scary climax. A few passages in particular I read late at night, and decided not to turn the light off at that juncture, reading on until finding the safety of familiarity. Ingeniously, the effect is as much achieved through what is not said, merely suggested, as it is in presenting to the reader unsettling paranormal activity. The touch of a hand and a picnic that has to be looked away from (for reasons never divulged to the reader) are subtle yet hair-raising moments. We are invited to question how much of what we see is in the troubled Eleanor’s mind, and how often is the phenomena really occurring. This novel will torment those who seek clarity from a reliable narrator, not least in the enigmatic ultimate fate of the protagonist. The effect of the book for the large part relies on the reader to look between the lines and to make up his or her own mind.

Jackson’s deft approach to horror undoubtedly leaves ‘The Haunting of Hill House’ playing on the minds of its readers. Oddly, where the author is most explicit, such as in uncovering the backstory of Hugh Crain, the man who built the house, it begins to feel more like a genre book by a lesser writer. The other weakness in the book is that the tight-knit group of four residents staying in Hill House is disrupted by the arrival of Dr Montague’s wife and colleague later on. Other than introducing the concept of planchette, which could easily have been done by Dr Montague, they serve little purpose.

At only just over two hundred pages, ‘The Haunting of Hill House’ is a quick yet satisfying read. It’s easy to see why it has become regarded as a classic of its genre. Shirley Jackson writes with considerable psychological insight. In Eleanor Vance, she creates a rounded character whom readers care about. In not holding her audience’s hand in accounting for every event that occurs within the walls of the house, she assumes their maturity. The overall effect is to create a claustrophobic and disturbing story that asks questions about what maintains the balance of the human mind. That is provides no answers is partly why, six decades later, ‘The Haunting of Hill House’ is still finding and terrifying new generations of readers.

The Folio Society produces books to the very highest standards, where cover design and internal artwork is used to enhance the reader’s aesthetic pleasure. Illustrator Angie Hoffmeister’s work on this volume is exceptional. The shades of blue that recur throughout the book are taken from a description of Eleanor’s room. The depiction of the house on the front cover has echoes of the creepy Gothic mansion in Alfred Hitchcock’s ‘Psycho’, and the full-colour illustrations inside, some of them double-paged, show great attention to detail in recreating what Jackson describes in her text. It’s easy to believe that the author would think that this illustrator has captured the true spirit of her novel.

The Folio Society edition of Shirley Jackson’s The Haunting of Hill House by Shirley Jackson, illustrated by Angie Hoffmeister and introduced by Joyce Carol Oates is available exclusively from www.FolioSociety.com.

In this article:Shirley Jackson, The Folio Society, The Haunting Of Hill House