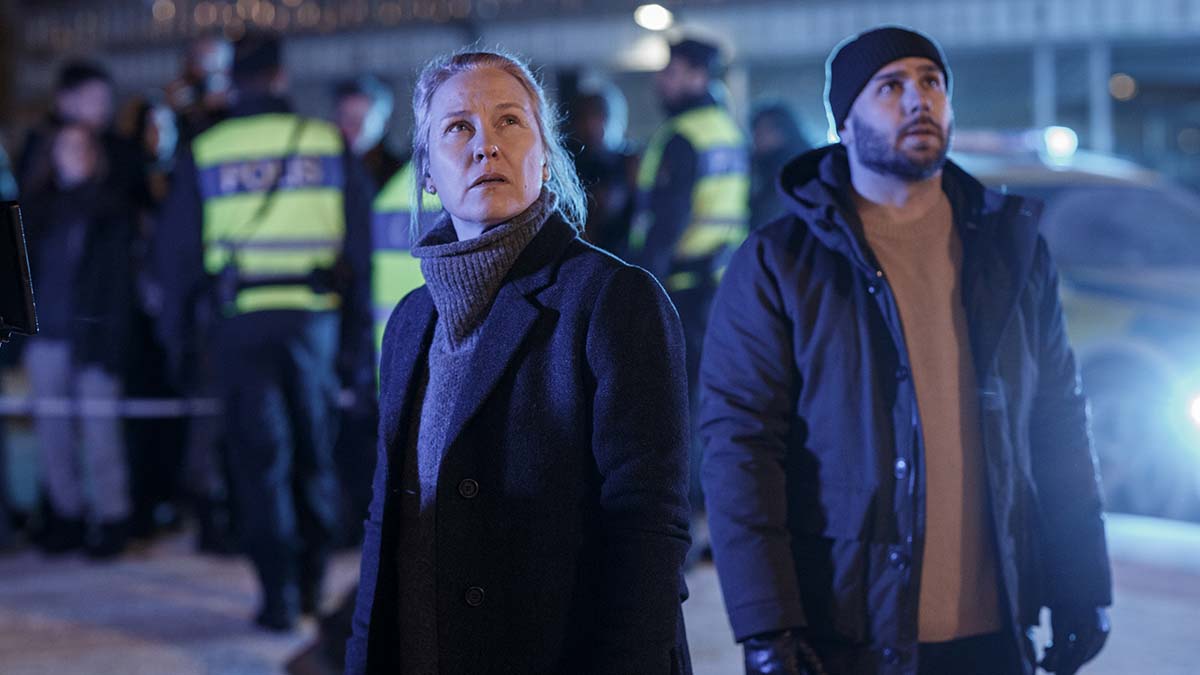 I was recently fortunate enough to be given the opportunity to see the opening episode of Walter Presents’ new Swedish drama, ‘Snow Angels’, in the wonderful surroundings of the Regent Cinema in London’s Regent Street. Afterwards there was a Q&A with the lead actor, Josefin Asplund; co-creator and director, Anna Zackrisson; and writer and creator, Mette Heeno.

‘Snow Angels’ (Snöänglar) is Walter Presents’ latest contribution to its Scandi Season – a dark, absorbing thriller about a missing baby boy and his somewhat dysfunctional family. But like the best thrillers, there’s much more to it than just a missing person story. We witness three very different threads in the opening episode, so fitting together the pieces of will be great fun over the coming weeks.

Firstly, we meet Jenni, played quite brilliantly by Josefin Asplund (who you might recognise as Astrid from the History Channel series, ‘Vikings’). She lives with her husband, Salle (Ardalan Esmaili) and their two children – Nicole and Lucas. Life is tough for them – they live in a rough block of flats on the outskirts of Stockholm, and Salle has at least two jobs to keep them afloat.

It’s just before Christmas when Jenni wakes to find both Salle and five-week-old Lucas missing. She assumes Salle has taken their son for a walk. But when she can’t reach Salle on the phone, she gets worried. When he does eventually turn up – after she’d reported them as missing to the authorities – he’s acting strangely and has blood on his clothing and hands. And more importantly, Lucas isn’t with him.

Josefin explained during the Q&A how much of the scene where Jenni and Salle realise their son is missing was improvised on the day; and that spontaneity is really evident, as the harrowing realisation that neither of them know where their baby boy is, hits the pair of them.

One of the police officers called in to investigate is Alice – the second thread of the storyline – who suspects that something is very wrong in the household. The parents are clearly hiding something, and when Salle plays his phone messages, we get an insight into what might be happening in that pokey flat. There’s much more to Alice, though, as I’m sure later episodes will reveal.

The third thread – as yet not linked to the rest of the story – is the rather tragic tale of Maria (another fabulous performance, this time by Maria Rossing). Maria is a nurse who is looking forward to welcoming her brother – who suffered brain damage as a child – to her home over Christmas. But sadly, that doesn’t turn out well, and we really feel for Maria as she tries – and fails – to connect with her brother.

Walter Presents always deliver new and intriguing thrillers – we’re used to that by now – and this is another fine show to add to their roster. It’s not always an easy watch – the palette is grey and cold, and the characters, whilst all utterly believable, are not always likeable. But the writing from Mette Heeno is exemplary, and it’s a drama that will have you hooked and wanting to know more.

A definite winner from Walter.

Walter Presents: ‘Snow Angels’ launches on Channel 4 at 11pm on Sunday 13th March 2022. The full boxset is available on All 4 now.