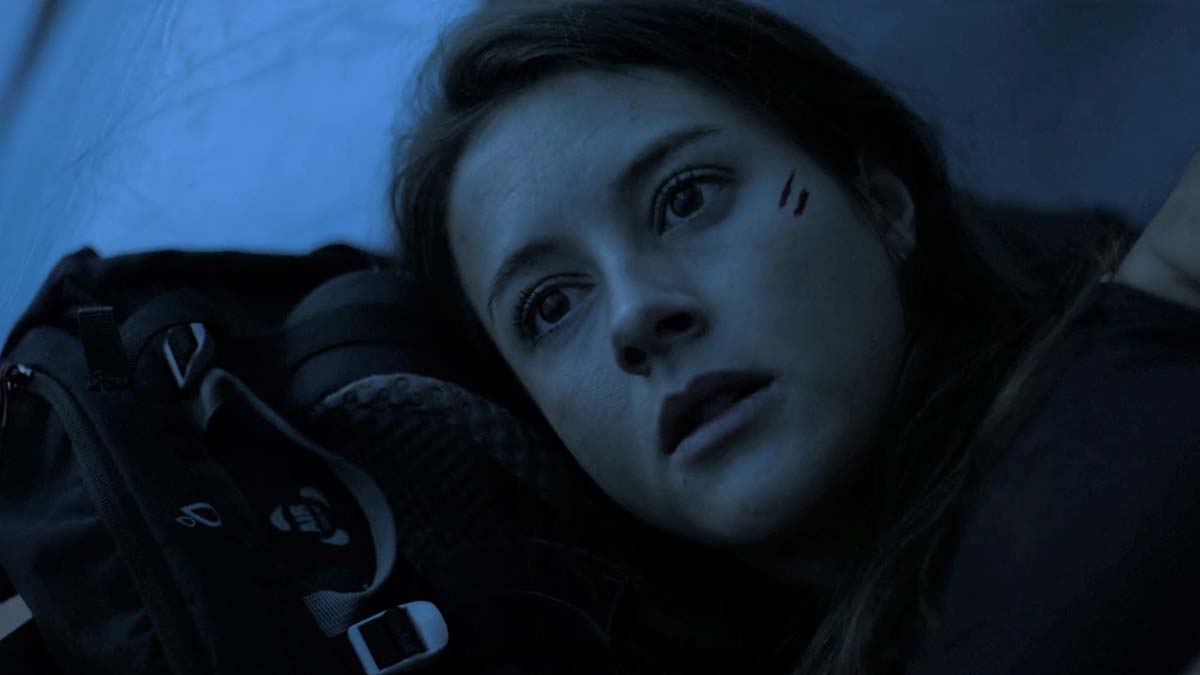 Best friends Kelly (Brittany Ashworth) and Sophie (Anaïs Parello) decide to embark on a mountain climb together. The night before they are due to begin, they meet a group of guys and agree to have a drink with them. When Sophie hits it off with Joshua (Ben Lamb), Kelly decides to retire to bed for the evening only to be woken by her friend’s screams for help. Rushing to her aid, and armed with a camera, Kelly captures Sophie being thrown from a ledge by the men and is forced into a dangerous game of cat-and-mouse on the side of a mountain.

‘The Ledge’ from director Howard J. Ford and writer Tom Boyle promises to be a turn-your-brain off popcorn horror and it delivers exactly what you think it’s going to. It’s obvious from the outset that the guys that come into Kelly and Sophie’s orbit, aren’t going to cause anything other than trouble and sure enough it’s not long before Joshua is attempting to rape Sophie before brutally murdering her. So far, so good. Having witnessed what happened, and been spotted herself by the group, Kelly starts to scale the mountain and she’s forced to stay there for the rest of the film.

While ‘The Ledge’ doesn’t require you to use any brain cells, it doesn’t ever really deliver on the taut premise that it dangles in front of you. The script is pretty awful with the male characters delivering misogynistic line after misogynistic line, just to make sure the audience knows just how awful they are. While the four men inexplicably stick together following Joshua’s clearly psychotic behaviour, there’s a bit of backstory thrown in that makes you groan rather than feel you understand the characters better.

Kelly meanwhile is stuck on the side of a cliff in what feels like a lengthy repetition of scenes as the men try to catch her and she holds her on. A series of flashbacks attempt to give her some kind of rounded character but mostly the audience learns nothing about her (but it’s at least a bit more than we learn about the quickly dispatched of Sophie). Brittany Ashworth does her best but the limp script means she has nothing to do other than scream, look anguished and fight off her attackers.

Perhaps the most baffling aspect of the film is the choice for all the characters to be American when the cast is mostly English. It adds nothing to the story whatsoever and the accents are at times very painful. The male cast members aim for generic jock and it’s all very cringey when you pay attention to the dialogue coming out of their mouth. Ashworth is at least better in the accent department.

‘The Ledge’ feels cheap but it’s the kind of film you can just about sit through if you have no better options. It’s not the worst film I’ve ever seen but it won’t be featuring in my recommendations any time soon. There was a real opportunity to have fun with the premise but instead, ‘The Ledge’ is just dumb with the cheapest of thrills and no chance of staying in your memory once it’s over.