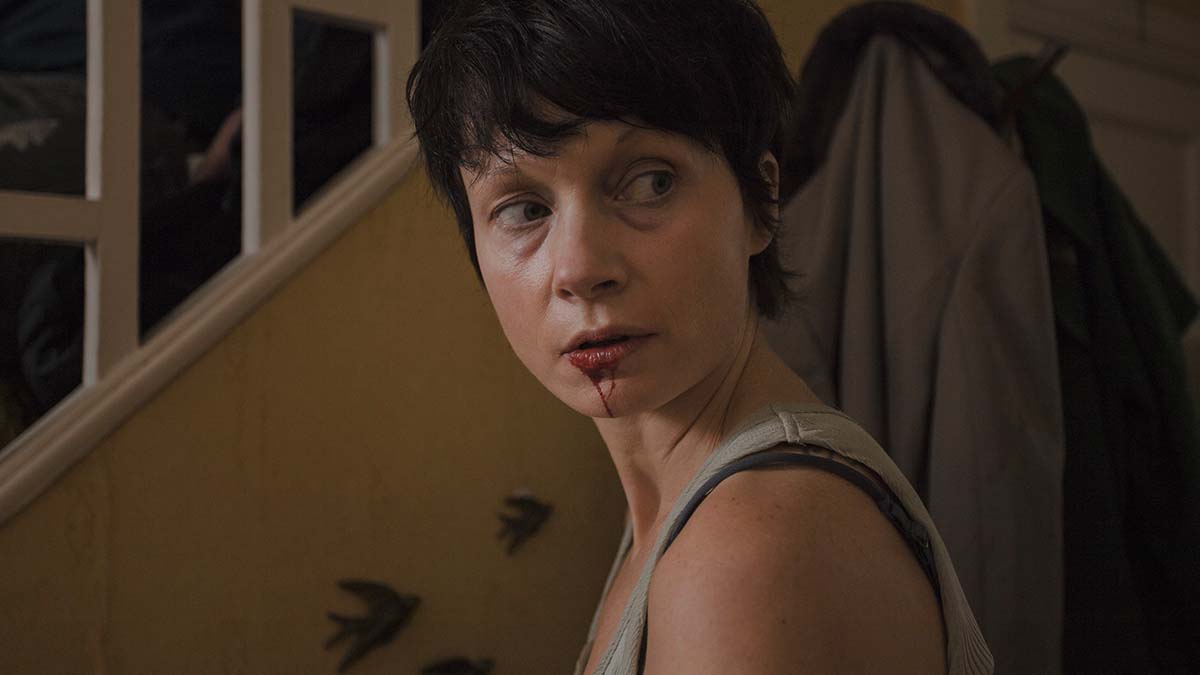 Outsider Char (Hazel Doupe) is bullied by her classmates over rumours about her family history and the bizarre behaviour of her mother Angela (Carolyn Bracken). One day Angela crashes her car with Char in the passenger seat and she disappears for a few days. When she returns, Angela is in a lighter mood and seems different, but Char is relieved that her mother has returned home. As the days pass, it becomes clear that all isn’t well with Angela as her behaviour becomes increasingly strange and frightening, and Char begins to suspect the woman in her home may not be her mother.

Easily one of the highlights of this year’s Arrow Video FrightFest Glasgow, ‘You Are Not My Mother’ is a terrifying and unsettling folk horror from Irish film-maker Kate Dolan. Dark, gloomy and filled with dread, the film never allows you to sit comfortably as you anticipate the next twist and turn. Central character Char is a girl who is very down on her luck. Her mother Angela clearly has severe depression and her grandmother Rita (Ingrid Craigie) is full of vague warnings but lacking on clear detail. A loner at school, Char is an easy target for the other girls in her class who happily bully and taunt her based on rumours they’ve heard about her family.

With Char already in a bleak situation as the film opens, you can’t help but feel for her when Angela decides she’s had enough and disappears. Rita is convinced that Angela will be back before long but no one in the family is prepared for her return. Seemingly free from any cares, Angela rubs up her brother Aaron (Paul Reid) in the wrong way and unsettles Char with her new sunny demeanour and enthusiasm for life. Keen to believe her mother has turned a corner, Char willingly goes along with it but it’s not long before she starts witnessing some very strange things.

Writer/director Dolan doesn’t try to pull the wool over the audience’s eyes when it comes to Angela. She establishes quickly that the woman who left her family isn’t the one that’s returned to it, but unpeeling the layers of the impact of that is what makes ‘You Are Not My Mother’ so gripping. Dolan riffs on Irish folklore, exploring The Changeling – a fairy that replaces a stolen child or baby. In this instance it’s a fully grown woman and in some ways that makes things altogether creepier.

While Dolan is masterful at create suspense and atmosphere, it’s the performances of Hazel Doupe and Carolyn Bracken that really sell the film. Doupe is quietly unassuming as Char and she plays her less as a victim and more as a product of her environment. Showing her skill as an actor, Doupe takes Char on a believable journey that keeps the audience on side. Bracken on the other hand is wonderfully unhinged as Angela, delighting in the character’s twisted behaviour. She is truly terrifying at several points in the film.

‘You Are Not My Mother’ is a film that deserves a much wider light to be cast on it. Whilst it may rely a little too heavily in places on common horror tropes, and the ending isn’t quite as satisfying as it could have been, the film is skilfully crafted and truly very effective. Dolan knows how to keep your eyes on the screen and her story will stay with you long after you leave the cinema and return to your home.