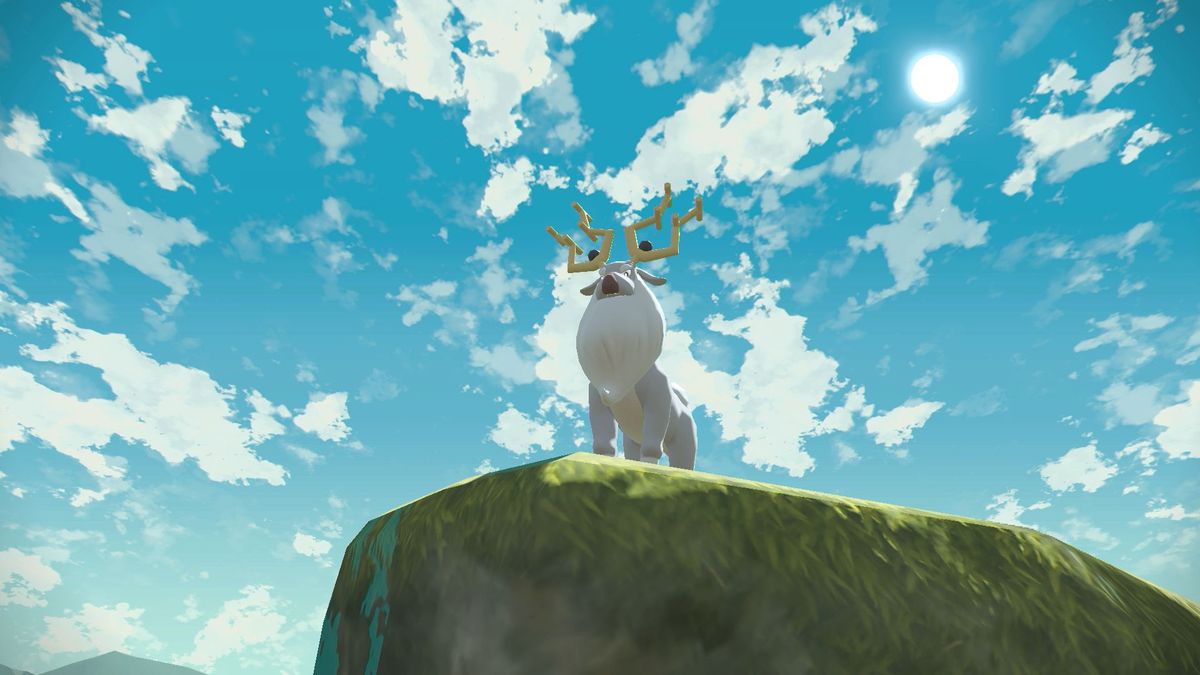 I’m a grown man with adult responsibilities (honestly!) and I still love Pokemon. Yeah, I buy a pack of cards a week and I’m not ashamed to admit it. Yes, I play the games and love them despite the fact they don’t really do much, or anything, impressive. I would be lying if I didn’t see how formulaic the games became over the decades. But this latest release, Pokemon Legends: Arceus, sets to throw every stale system out of the window and begin anew. I, and many Pokemon fans are interested to see how they stick the landing.

The story of Legends has your chosen character visited by the Pokemon God, Arceus, who sends you back in time to the Hisui region (later known as Sinnoh) and tasks you with fixing some strange goings on. When you land in the Hisui region, you’re greeted by Professor Laventon, as luck would have it he is also trying to figure out what is going on, and to create the first Pokedex and prove to the world that Pokemon aren’t creatures to be feared but can live in harmony with humans.

The early Pokemon games never really delivered what I’d call a solid story, it wasn’t until the DS generation that the stories started to improve but honestly, even at its peak, Pokemon games never had a gripping story. Narrative-wise, Pokemon Legends continues this trend. This is a pretty bare-bones story once again, sure there’s a goal and a twist but when you look at Final Fantasy, Persona, Fire Emblem or well, any other JRPG, Legends doesn’t stack up. What the game does get right is the sense of the world. At the beginning of the game the people of Jubilife Village fear Pokemon and as you discover Pokemon and show people that Pokemon aren’t so bad, the Village starts to expand and Pokemon inhabit the village. You feel like you’re making a difference in the world, despite that, it’s a shame the core plot didn’t do a bit more.

Every Pokemon game follows a trend, move into your new town, get a starter Pokemon, you’ll go through a forest early game and hit the Rock gym and blah, blah, blah. Big changes were needed and boy, does this game shake up the formula. The first obvious change is exploration. Legends isn’t an open-world game, instead, the map is broken up into 5 explorable regions. These are like the Wild Area in Pokemon Sword and Shield but offer much more freedom. You can explore these areas on foot, or through a multitude of rideable Pokemon, you get via the story. In these maps are a host of crafting ingredients, a couple of collectables and of course, Pokemon.

In Legends, Pokemon roam the map like in Sword and Shield but I really liked the pool of Pokemon this time around. Typically, you would encounter the early stage evolutions earlier in the game and the late-stage evolutions towards the finale. Now, you might encounter all stages of an evolution line in the same spot. It feels like these creatures actually inhabit the world and also adds an element of danger to encounters, which we’ll touch on later. Perhaps the biggest change to Legends is that you can fully complete the Pokedex without ever trading online. Some Pokemon can only be obtained in certain variants of previous titles or through online trading, and that is thrown out of the window for this title and it’s a great thing.

How you get these Pokemon is changed completely. You can aim and throw a Pokeball at any time in an attempt to catch a Pokemon and the system works perfectly. There are plenty of types of Pokeball and by using stealth or crafted items, you can complete most of the Pokedex without ever battling. Some Pokemon are skittish and will flee on sight, others are curious and will come right to your feet…….others will attack you. Yes, in this title Pokemon will actively attack the player character and if you take too much damage you will blackout and lose valuable resources. Of course, you can deploy your Pokemon in battle and the rock-paper-scissors system returns in turn-based battles with some tweaked moves and a new option to use attacks in Agile or Strong styles to increase speed or damage. You have to be careful because Legends is a much tougher game than previous entries, it’s no Dark Souls but you can’t be careless this time around because you will die quickly. Crafting is also a big component here and there’s a bevvy of items to aid you on your journey.

You progress through the game via the Pokedex, the more you fill up a Pokemon’s page by doing various tasks, the more points you get and eventually you increase in rank. This opens up the various vendors and improves their stock as well as increasing the rewards given for beating the various side quests.

Visually, the game slightly disappoints. People are slating the visuals in this game and they aren’t as bad as others claim but put it next to Luigi’s Mansion 3 and you’ll see that the Switch isn’t being taxed too hard. The soundtrack is solid with a couple of standout tracks but the biggest grievance is the lack of any voice acting. It’s really noticeable in this title and even a Zelda style mumble would of massively improved immersion.

There is clearly a lot of inspiration taken from The Legend of Zelda: Breath of the Wild here and it’s easy to see Game Freak knew they needed change. Despite a passable story and lack of voice acting, Game Freak did an awesome job. The feeling of dynamically catching or battling Pokemon, or accidentality aggroing multiple Pokemon at once, or even seeing Pokemon slowly being embraced by the Village all help Legends feel like a real evolution of the series. There’s a little work to be done and I’m sure more Legends titles are to come, but after so many decades of the same game, this is one hell of a reinvention. Is it enough to bring in new players? I think so. The future of Pokemon is looking good.