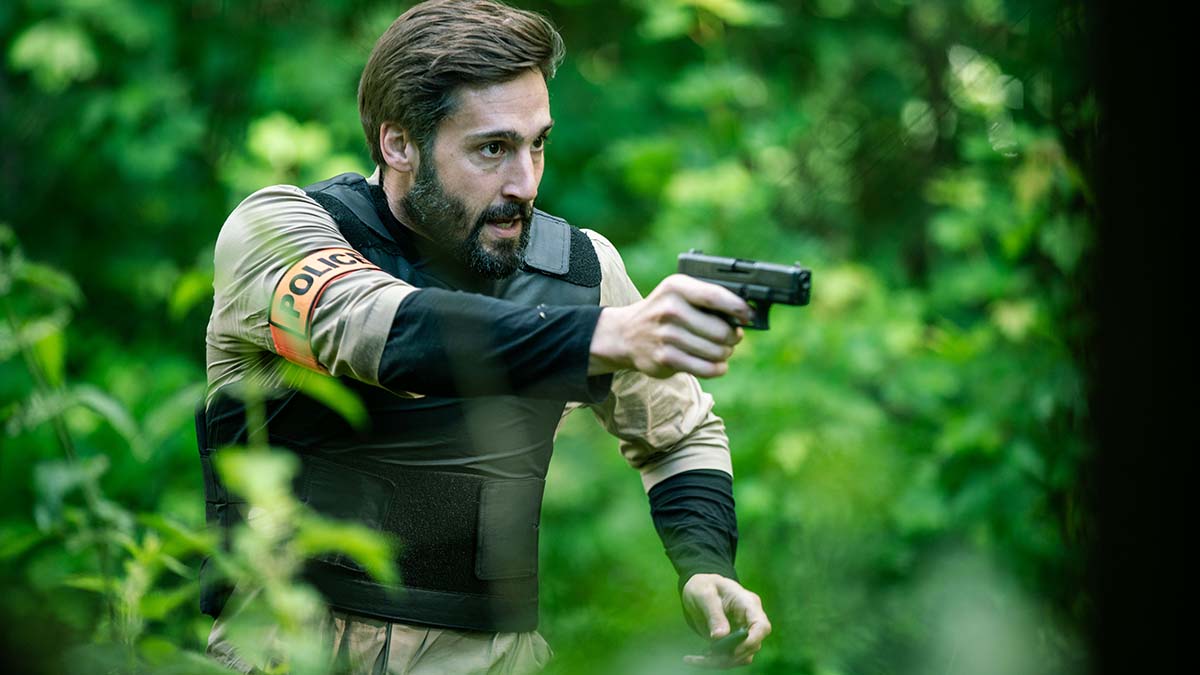 ‘The Tourist’, which aired recently on the BBC, was a fine comedic thriller about a man who – after being run off the road in the Australian outback – loses his memory. The storyline developed and evolved as more and more of his mysterious past became revealed.

‘Trauma’ – this French thriller from 2020, and the latest release from Walter Presents – also features amnesia as its main twist. This time it’s a police officer, Adam Belmont, who is shot in his car one rainy night. The bullet hits him in the skull and damages part of his brain. He ends up in a coma, but he makes a miraculous recovery – except for complete memory loss.

But the first episode starts pre-shooting. Armed police raid a caravan, but they soon realise they’ve got the wrong home. Adam is one of the police on the raid, and he alone spots movement in a different caravan and ends up chasing their target through the woods. But what happens after that is unusual, to say the least. No spoilers here – you will need to watch it yourself to see what transpires.

The police are seeking a serial killer. There have been three female victims so far, all suffering multiple stab wounds. But after Adam’s shooting, an Internal Affairs officer takes over the case and casts doubt on the work the team have done to date.

However, the main hook – the thing that will make you want to see how this transpires – occurs at the end of episode one, when Adam is discharged from hospital and returns to his house. A locked door in the spooky old building (he learns that he only bought this remote property recently) leads him to the basement and a nasty surprise. Is he the good cop everyone says he is, or is there a much darker side to Adam Belmont?

All French thrillers in my eyes will inevitably be compared unfavourably to ‘Spiral’ – possibly the finest cop show ever. ‘Trauma’ is no ‘Spiral’ – certainly not on the evidence of the opening episode, anyway. There are too many tired cliches, such as the adulterous cop with marital issues and a bad relationship with his son, and the Internal Affairs officer who is smarmy and unnecessarily unpleasant. But I have to admit that the denouement at the end of the first episode has piqued my interest, and I’m intrigued to learn more about Monsieur Belmont and his past.

You might recognise Olivia Ross, who plays Julie Dulac (one of the police team investigating the murders, and – it would appear – Adam’s one-time love interest) from a couple of episodes in the opening season of ‘Killing Eve’, where she played Nadia.

If you can overlook some predictable character portrayals and a few questionable holes in the storyline, this could well be worthy of your attention. And the reveal at the end of the opening episode will hook you in, I’m sure.

Walter Presents: ‘Trauma’ is available as a boxset now on All 4.

In this article:Featured, Trauma, Walter Presents