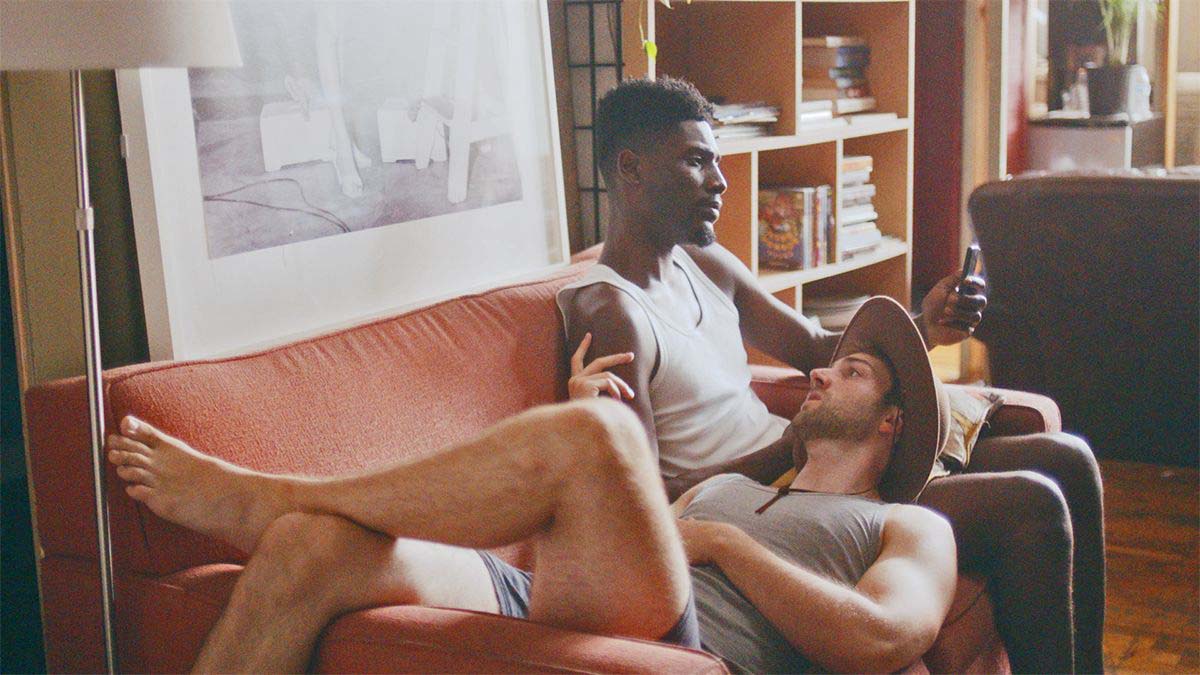 Haunted by childhood trauma Ben (Matt Fifer) moves from one sexual encounter to the next, detached from an emotional relationship with any of his hook-ups. When he meets Sam (Sheldon D. Brown), a young man with his own past trauma, Ben begins to fall head-over-heels and allows himself to emotionally connect. As the two men get to know one another, Ben becomes increasingly reliant on Sam, who isn’t quite as ready to jump into their relationship.

Based on real events, ‘Cicada’ is written and directed by Matt Fifer, with co-director Kieran Mulcare. Fifer also stars as the central character Ben and the story that plays out in ‘Cicada’ is inspired by things that happened in his life. Fifer’s co-star Brown had input into the story two, adding his own real-life experiences into the mix. The end result is a drama that at times feels like a documentary, exploring the lives of two young men from very different backgrounds who are brought together as they deal with their respective PTSD.

Ben is the character we spend most of the film with and as we’re introduced to him, we see him sleeping his way through New York with men and women. These empty encounters while sexually pleasing, leave Ben with nothing and no amount of shagging strangers makes him feel any better about the trauma he’s carrying around with him. When he meets Sam, it’s the first time he allows himself to entertain having a real relationship but Ben’s inability to see that Sam is dealing with his own trauma creates hurdles for the burgeoning couple. Sam is carrying around a stoma bag following an incident from years earlier, he’s not as confident to display his sexuality as Ben is and his experience as a black man is one that Ben simply doesn’t understand.

Much of the film is spent watching Ben and Sam converse with one another. Their conversations range from the mundane to the deep, and it’s this aspect of the film that has rightly drawn comparisons to the ‘Before’ films. Unlike those films though, ‘Cicada’ expands its world and allows the viewer to meet some of the characters that have impacted on both Ben and Sam’s lives. I won’t reveal what their respective traumas are but there’s plenty of clues along the way, including references to a real-life court case, that will make it clear if you pay attention.

With Fifer acting in multiple roles, it’s easy to be sceptical about whether he can pull everything off but he does. He’s engaging as Ben, making you care about him even when the character doesn’t appear to care about himself, and his direction takes us through a modern-day view of New York where relationships can be fleeting and unexpected meetings turn into full-fledged romances. Brown is strong too as Sam, the beautiful black man that falls into Ben’s life and challenges him in multiple ways. Colbie Smulders is a nice addition too as an unorthodox therapist that tries to help Ben through his trauma.

‘Cicada’ feels like a very modern romance story and it certainly touches upon a number of hot button issues that are part of the everyday conversation right now. Fifer has created a film that shows a more realistic side of love and human nature, refusing to romanticise it and push to the viewer, or the characters, to a forced happy ending. In that way it’s refreshing and Fifer certainly shows plenty of promise as a film-maker.