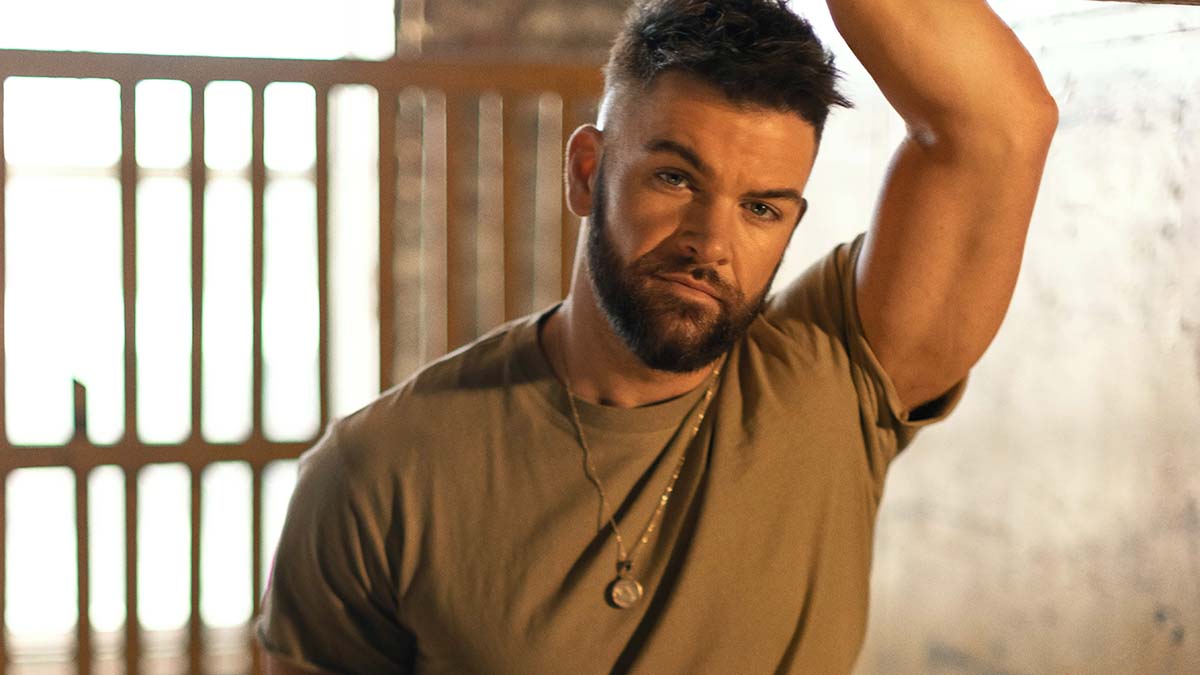 Dylan Scott is one of the fastest-rising stars on the Country music scene right now.

Fresh from his huge success with ‘Nobody’ in 2020, Scott has released new single ‘New Truck’, which is shooting up the charts. He also recently treated fans to new track ‘Static’ and toured with Luke Bryan.

I spoke with Dylan to find out about being on the road with Luke, to discuss his new releases and talk about returning to touring…

Since we last spoke ‘Nobody’ really blew up and it’s been a huge hit for you. What was it like for that to happen when you weren’t able to get out to perform it?

It was weird, man to be honest with you. We were having success, but you can’t really see it. Does that make sense? You can’t go out to a show and people are screaming the words back to you to a song going up the charts. You can’t really see that success in person ut it’s happening. You can see a little bit on social media here and there. Once the pandemic was over and we could actually get back to shows I could see what’s going on. Usually when we have a single climbing the chart, you see it progress at shows but this time we didn’t see it at all. When we played shows again, all of a sudden people were screaming that song back. Hopefully we don’t have to experience it like that again.

Was it quite emotional when you were able to get back on stage?

I’m not a very emotional guy. Don’t get me wrong, it was good to be back especially after not touring for over a year. I did have to take a minute and go, ‘man OK, we’re back doing this again after a whole year’.

You’ve been on the road with Luke Bryan this year. You can’t get a much bigger tour than that. What was it like to be part of that?

It was pretty incredible, man. Being on tour with Luke is something that I’ve wanted to do for years. The dude’s the biggest in Country music still. I grew up basically, from the time I moved to Nashville, listening to this stuff and going, ‘man, that guy! He’s got it going on’. It was cool to be able to come out of the pandemic onto a tour of that caliber. We’re talking 20-25,000 people a night. The biggest tour I’ve ever been on. It was awesome.

Luke really puts on an incredible show and that energy must be great to be around. Did you learn anything from him?

Yeah. The first weekend out, he was like, ‘man, you just gotta have fun. At the end of the day it’s just all about having fun. If you go out there and have fun, everybody else has fun.’ That’s great advice and it’s so true too, you got to go out on stage and have fun. One of the coolest things I learned watching him every night, is he’s been doing this for so long now. He’s basically done everything you could possibly do as far as in the Country music world it seems like. He’s the biggest in the genre still and even today, he doesn’t just set it on cruise control and go out on stage and do his show. He goes out there and puts on a show every single night. I thought that was really cool. He could very easily just set on cruise control tonight, go out there and get the show over with but he goes out there and crushes it every single night.

He’s a TV personality as well now with ‘American Idol’. Would you like to emulate his career path and help the next generation of artists coming up?

I don’t know, man. I’ve never really thought about it. I’m so focused on what I have going on right now and trying to get to that next level. We have a lot of work ahead of us. Obviously we’ve had some success but we’re just getting started man. I want to have number one after number one after number one. We’ve moved from small bars to bigger clubs to bigger venues. I want to sell arenas out one day and move on to do bigger tours. I’ve got a long road ahead of me, I feel like, before I even think about doing something like that. It’s definitely something I would think about doing.

Your single ‘New Truck’ is shooting up the charts. The song feels a little different for you. What’s the story behind it?

It’s a different vibe. If you listen to my music, a lot of my music is love songs just because it’s real to me. The love is real. I’ve been with my wife since I was 15 years old. This is actually a breakup song, which is the total opposite of what I usually do. It’s not even about a truck, even though it’s called ‘New Truck’. It’s basically about a guy who hops up in his truck and still sees the memory of this girl, he’s still finding her chapstick or hair ties. There was a stint in my life when I was dating my wife and we broke up for a few months. It was tough so I’ve been there, I’ve dealt with it. The song spoke to me. I’m sure it speaks to a lot of people the same way. It’s an up-tempo breakup song that just feels good. It was a cool song and something different that I’d not recorded yet.

You’ve also gifted us with ‘Static’ as well. Why did you put that one out as ‘New Truck’ is shooting up the charts?

What can people expect from this album? Is it going to be along the lines of the tracks that we’ve heard?

The music is a little more mature and I don’t mean that in a way, like, ‘oh, every song is a mature song’. That last album I released was three or four years ago, and in three or four years I’ve had babies and I’ve grown as an adult. The music I think is a little more mature in a good way. I’m very curious to get it out. I think it’s my best batch of music I’ve ever recorded so I’m really excited about it. I think it’s that group of music that takes somebody’s career to the next level. I don’t mean that in like a cocky way at all, I didn’t write a lot of these songs on this album. I just wanted to find great songs at the end of the day and I think that’s what we’ve got.

How do you decide that you want to record an outside track. Is it a vibe?

It’s basically just the vibe. If I hear something that just speaks to me I’m like, ‘man, it’s a really cool song, I gotta record this’. Don’t get me wrong, it’s great if you write all your music, but there’s so many great songs out there being written every single day. At the end of the day, it’s not about who wrote the song. It’s about having a great song and a great product, and that’s just the way I’ve always looked at things. If I write all the songs on the album then great, it means I feel good about it. I take what I love that I wrote, and what I’ve heard, and I combine them all together, and we have a project.

Just because I don’t write a song it does not mean that somebody else can’t write a song that speaks directly to me in my life. I think it’s important that an artist performs and records a song that they can relate to otherwise, it’s like, ‘what are you doing? Why are you singing that?’ There’s so many songs out there that can relate to anybody and what I look for is what relates to me.

We’ve already had a Christmas album from you in years past, will we be getting any more Christmas songs this year or do we have to make do with what you’ve already put out?

Looking ahead to 2022 you’ve got a very busy year on the road. Will touring be your main focus?

I would say right now my main focus is on this headlining tour I have coming up. It’s gonna be good to see my fans again. Hopefully the fans that we’ve gained off of being on the road with Luke, some of his fans, but it’s been a while since I’ve been out and headlined my own shows. It was before the pandemic so it’ll be nice to get out there and do that. ‘New Truck’ and this new album, that’s my focus right now, just getting the stuff out there for everybody to hear and hopefully just continue to propel my career in an upward motion.

Given all the success you’ve had during the pandemic, it must be exicting to get back out there and see just how much your fanbase has grown. I’d imagine it’s significant…

I hope so. You never know, especially right now and people are still uncertain. We’ve seen certain markets where ticket sales are great, and other markets where it’s not so great. People may still be a little hesitant to be out in a big group of people, and I get it. We’ll see what happens. I think eventually it’s all gonna come together at once and be like, ‘oh, wow, here it goes’. It’s a stepping stone and it’s a building block, and I think we’re building it.

Feel free to bring the tour over the UK. We’d love to see you here…

We’d love to man. I’ve been wanting to get over there for a while now, before the pandemic but that set us back a little bit. Hopefully we can get over there and play some music real soon.

Are you going to be able to take some time out to enjoy Christmas with the family and with the kids?

Yeah, I am. I’ve got a couple of shows left this year, not many at all. I’ve hit that point where it’s like ‘alright, let’s relax a little bit. Let’s enjoy Thanksgiving. Let’s enjoy Christmas and enjoy a little time off’ because come end of January we’ll be back at it full swing again and probably won’t have another break until this time next year. We’re gonna sit back and do a little resting and enjoy the family, and get ready for 2022!

It’s a good feeling knowing that we’re gonna be working again. The beginning of this year was tough, man. The uncertainty of not knowing what what was coming. Luckily, once we did start the tour with Luke, we got to do all the dates and everything worked out good. It’s gonna be a fun year next year.

Dylan Scott’s single ‘New Truck’ and his track ‘Static’ are out now.

In this article:Dylan Scott, Featured