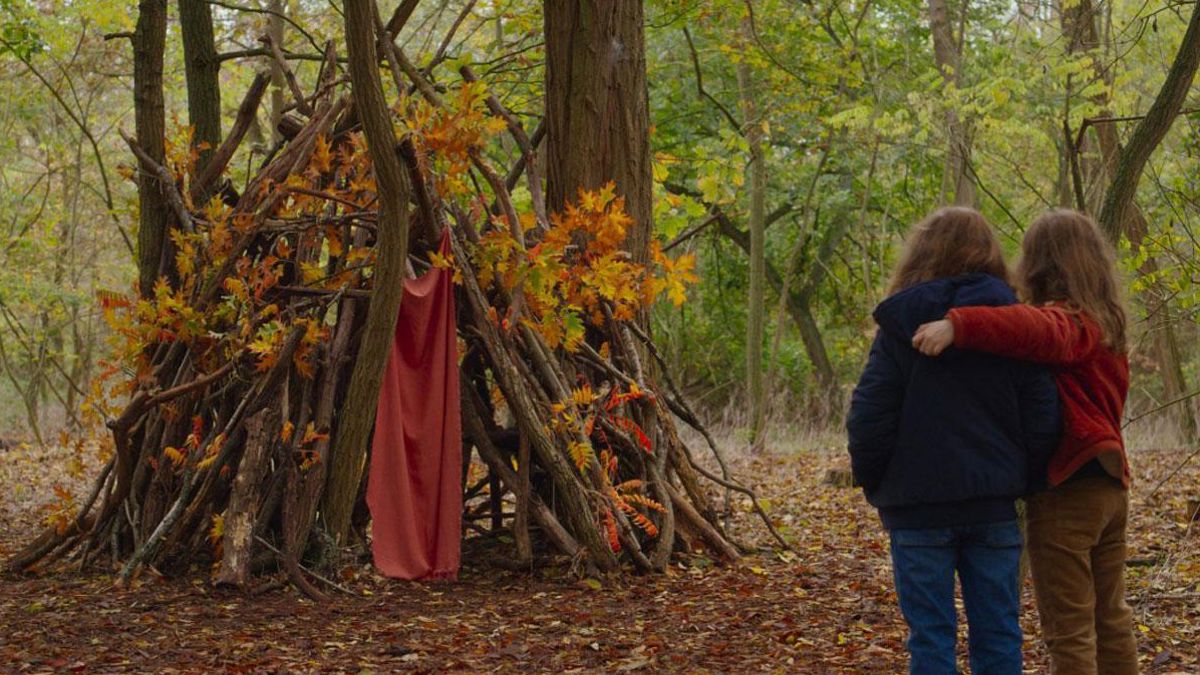 Céline Sciamma follows up her internationally acclaimed masterpiece ‘Portrait of a Lady on Fire’ with this gorgeous and spellbinding piece of magical-realism. ‘Petite Maman’ is short and sweet, and arguably little more than a bedtime story, but it comes packed with more insight and emotional wallop than you might be ready for.

Joséphine Sanz is Nelly, an eight-year-old girl whom we first meet at a care home, where she moves from room to room saying goodbye to the various residents. The final room she enters is empty, having until very recently been occupied by her grandmother. With the room emptied, Nelly and her parents drive to her grandmother’s house in the country to begin the task of clearing it out.

Overcome with grief and awash with memories, Nelly’s mother (Nina Meurisse) leaves without a word. As her father continues to pack up the old house, Nelly is left on her own to explore. In the woods behind the house, she meets and befriends Marion (played by Gabrielle Sanz, Joséphine’s twin sister) and quickly grasps that her new friend is in fact her mother when she was the same age.

Sciamma elegantly conveys this without any clunky exposition or attempts to explain what is happening. There’s certainly an element of fairytale about all this (spooky goings on in the woods behind grandma’s house), or it could all be in Nelly’s head. Sciamma pleasingly leaves the ghostly ambiguity to the viewers imagination, allowing us to fill in the blanks with our own emotional reactions to what we are seeing.

Narratively and stylistically, Sciamma has stripped everything back. Working again with ‘Portrait…’ cinematographer Claire Mathon, every frame is imbued with a stark naturalism, peppered with bursts of autumnal colour from the magical woods. This naturalism extends to the extraordinary performances from the Sanz twins, who are both making their acting debut. The sisterly relationship that already exists between them allows Sciamma to draw natural and unassuming performances from the two girls. It’s an extremely smart piece of casting.

In a remarkably short running time (a mere 72-minutes) ‘Petite Maman’ gracefully and smartly explores themes of grief, memory, spirituality, and the deep bonds (and often yawning chasms) that exist between mothers and daughters. It takes an amazingly assured hand to do this with such sophistication, such economy, and to never lose sight that this is being told through the eyes of a child.

About midway through the film, Nelly says to her father, “you never tell me about when you were children. I don’t know the real stuff.” Through her time spent playing with Marion, whether it be making a mess in the kitchen in a joyous scene of them cooking crepes, or the hilarious play they write together, Nelly is afforded the chance to know her mother better. There’s something so beautiful and affecting about this. A truly magical little film.