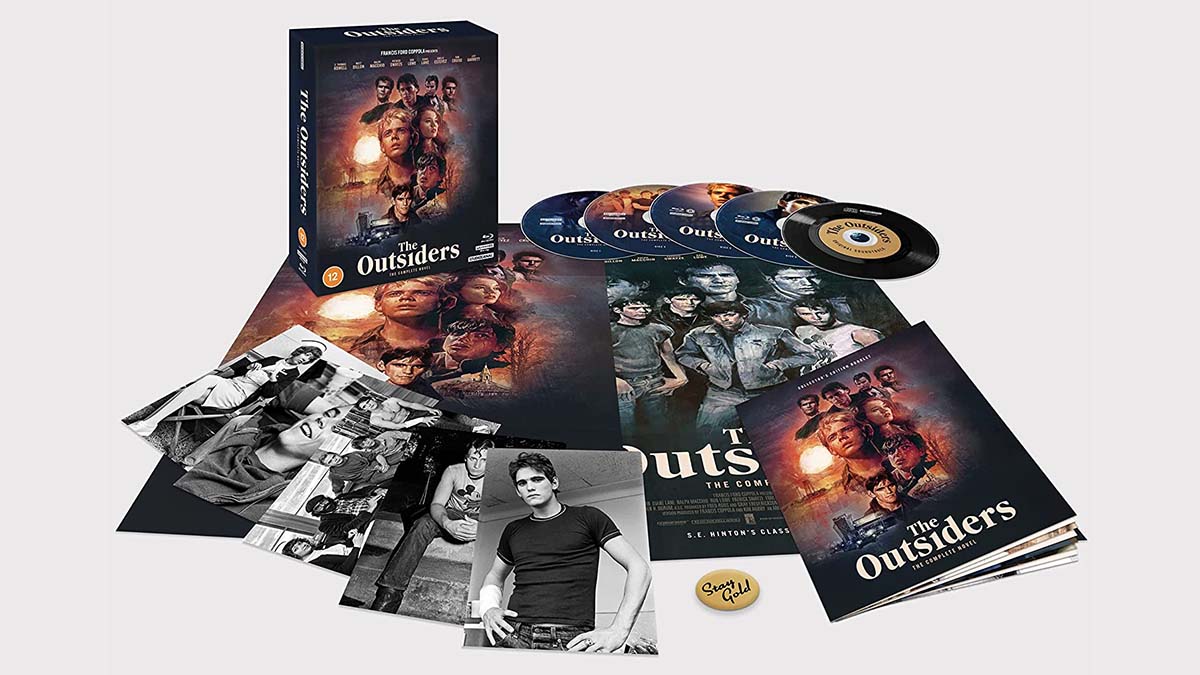 A long-standing rivalry between The Greasers and The Socs escalates when an altercation results in the death of one of the gang members. Geasers Ponyboy Curtis (C. Thomas Howell) and Johnny Cade (Ralph Macchio) are forced to flee with the help of older Greaser Dally (Matt Dillon). Away from their actions, Ponyboy and Johnny have to face up to the harsh realities of what they’ve done and the impact that has on their lives. All the while, the constant rivalry between the two gangs threatens to boil over to the point of no return.

First of all, I should mention that this review is based only on the one-disc 4K release. The Collector’s Edition, retailing at £49.99, is a 5-disc release that includes a wealth of extras along with the film soundtrack on CD. That edition also includes artcards, a booklet with new interviews and two posters from artist Tony Stella.

‘The Outsiders’ is directed by Francis Ford Coppola and it’s based on the much-loved book by S.E. Hinton. This version if ‘The Complete Novel’, which was originally released back in 2005 and features an extra 22 minutes of footage that wasn’t in the theatrical cut. That allows the film to stick even closer to the book, really fleshing out the characters and allowing the viewer to spend even more time with them. If you’re a fan of the book, you’ll love all the additional material but if you’re not, you may find that it makes the film a little overly long without adding a whole lot to the overall story.

The plot of ‘The Outsiders’ is incredibly loose and at times it feels like you’re just enjoying a front row seat to a group of troubled young boys as they come of age. The cast is packed with actors who went onto be big stars including he likes of Rob Lowe, Tom Cruise, Matt Dillon, Patrick Swayze, Ralph Macchio and Diane Lane. That gives the film a brat pack like feel and the ensemble does a fantastic job of bringing this bare bones story to life. On the one hand a meditation on becoming an adult and the other a look at how trauma can push young people into dangerous situations, ‘The Outsiders’ works because you care about the characters and the writing allows each of them to be fully developed.

The 4K release is packed with extras. There are two audio commentaries one with director Francis Ford Coppola and one with stars Matt Dillon, C. Thomas Howell, Diane Lane, Rob Lowe, Ralph Macchio and Patrick Swayze. There’s introduction to the film from Coppola as well as a featurette (‘Outsider Looking In’) featuring Coppola discussing key scenes. Cinematographer Stephen H. Burum has his own featurette about the film alongside a selection of deleted scenes, a new trailer, a featurette on the 4K restoration and ‘Old House, New Home’, which looks at the museum created in the house from the film.

The restoration looks stunning. The colours are more vibrant than they’ve ever been before and the detail in the picture, which was restored from the original negative, is magnificent. Add to that the superior sound that really brings out the little touches in the soundtrack that you may never have noticed before. It feels more encompassing and immersive than any previous versions of the film.

‘The Outsiders’ isn’t a perfect film but it’s easy to see why it has become a classic. It’s worth seeing just to watch the incredibly star-studded cast as each of the actors gives solid performances. Tom Cruise delivers high energy while Rob Lowe was clearly setting into his teen idol phase. It’s C. Thomas Howell and Ralph Macchio that hold it all together though, both giving performances beyond their years. The story may lag in places and for my money the theatrical version is tighter but this new restoration does justice to a film that deserves its place in cinematic history.