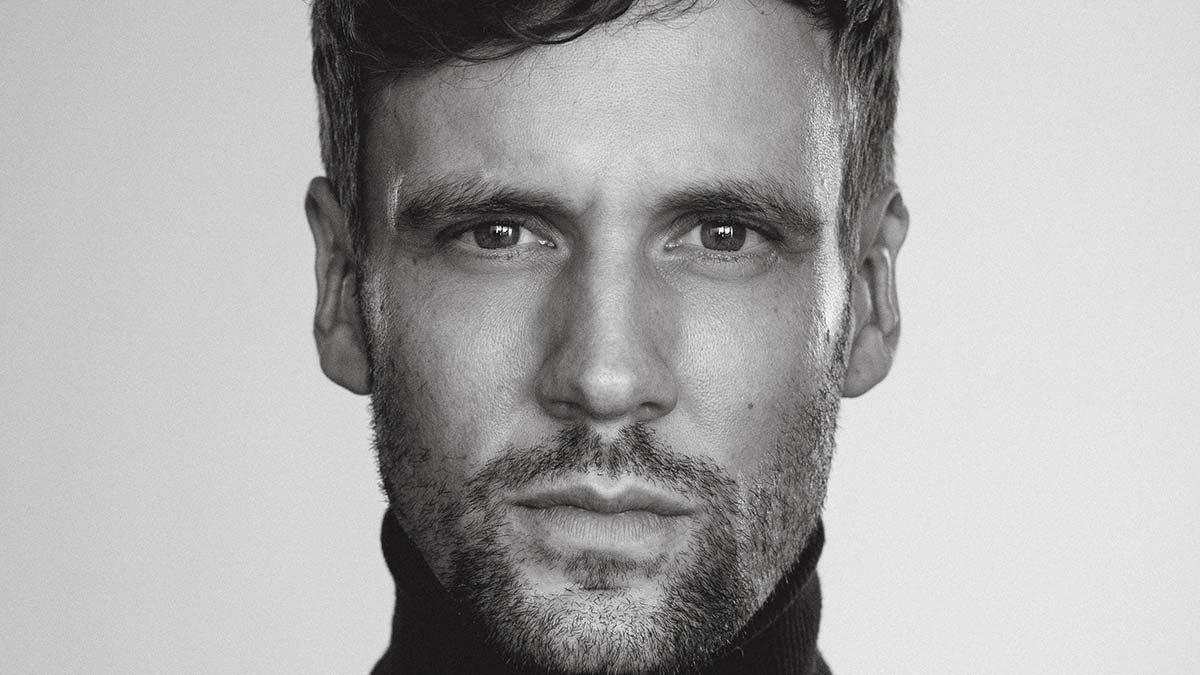 British actor Nick Blood rose to fame after landing roles in hit shows such as ‘Trollied’ and ‘Marvel’s Agents of S.H.I.E.L.D.’.

For his latest role, Blood is starring alongside Connie Nielsen and Christopher Eccleston in the twisting Channel 4 mystery ‘Close To Me’. Based on the book by Amanda Reynolds, ‘Close To Me’ tells the story of Jo Harding (Connie Nielsen) who is forced to piece her life back together after an incident leaves her with amnesia.

The series is directed by Michael Samuels and it’s sure to be the slow-burn must-see Sunday night watch for lots of TV viewers over the next few weeks.

I spoke with Nick recently to find out more about the show, discuss how his character fits in and to talk about working with Connie Nielsen…

In ‘Close To Me’ you play the character of Thomas. Where does he fit into the story?

Connie’s character has woken up having had an accident. She’s lost her memory, can’t remember anything from the past year and is piecing it together. Each step of the way there’s these little surprises and twists and turns, one of which is meeting her daughter’s boyfriend (Thomas) who’s been this slightly controversial figure within the family. He’s far too confident and far too sure of himself. Within any family when an outsider comes in, certainly with those traits, it’s unsettling for everyone, particularly her Dad. Thomas has this great connection with Connie’s character. She’s been in this marriage for all this time and she’s a little bit unfulfilled, living out in this beautiful house but slightly isolated. (Thomas) is this breath of fresh air that comes in. You get into this ambiguous situation where she’s not quite sure how well they got on.

The chemistry you have with Connie is fantastic and I wasn’t sure where the story was going to go between your characters. What was she like to work with?

She was cool. We had quite a lot of stuff together and she has quite a matter of fact attitude to things, not much messing around. That puts you at ease. With the chemistry, that’s one of those things that you can never really quantify, or plan or predict really. I always find it quite interesting when people pick up on that on-screen relationship because I don’t think you’re aware of it necessarily at the time. You can get on with somebody and it doesn’t really fizz on screen. I think it’s just a bit of alchemy between what’s written on the page and how every actor in the scene is responding. Some of the chemistry with me and her, for example, like the dinner scene… part of that is because you’ve got Chris’ character there and there’s conflict with me and him so you see the bond with Thomas and Jo more. One of the great things about doing what we do is that you get to meet all these different people and each job is a new group of work colleagues.

What was it about the scripts for ‘Close to Me’ that you drew you to the project?

Honestly, it was just about having fun with that character. When you have somebody who kind of doesn’t really give a shit, at least that’s what he tells himself. I think it’s quite performative with Thomas, he’s one of those people that wants everyone to know he doesn’t give a shit. That’s quite liberating and that for me was the main thing. I just thought I could just have fun with this character. Immediately in my head, I could see how he would dress and I knew who that guy was. It was great with the costume and everything, I got there and straight away it was like, ‘yeah, this is exactly how I saw it’. Pound shop Russell Brand was how I viewed it (laughs). You get that liberation of a character that doesn’t really care what people think of him.

At some points in the series, it’s very generous to call what Thomas is wearing a costume…

Your character is so forward and confident, is it intimidating to be shooting scenes where you’re only in your underwear?

As my career’s progressed, I don’t care (laughs). It’s just a TV show. It’s just another job. I just crack on with it really. You learn that everybody’s winging it a bit and everybody’s nervous. If you just accept it and roll with it, it gets pretty normal quite quickly. Michael was really respectful with any kind of nudity or sex scenes and put the emphasis on what is it that we feel comfortable with. (He) let us dictate those things. Connie kept on saying, ‘I’m Danish, we don’t we don’t care about this stuff. We just get on with it’. If I were to look at it and worry about locking into that vulnerable side of me or self-conscious side of me, then it would get more difficult. If you look at it more from enjoying playing this role and this character, it just becomes a bit fun. (In the episode you’re referring to) it’s provocative in itself. I locked into having fun with how potentially uncomfortable that was going to make her character feel and just lean into that. I think there were little bits that might have been cut out, which I really leant into making her uncomfortable (laughs) because it just helps with that scene.

It can be weird doing sex scenes. It was the first time I had an intimacy coach. I saw it like a stunt coordinator for sex scenes (laughs). It can seem slightly odd at first to have somebody directing that stuff. I think it’s really useful. I don’t know whether it’s a cultural thing, us being sort of British and a bit uptight about things. For sex scenes everybody inside is going, ‘this is weird and I feel nervous, and I don’t really know how the other person feels about it’. Everybody’s feeling that but just locking it in and not expressing it. Whereas when you’ve got the intimacy coach there, it allows everyone to face it head on and it make sures everybody knows what everybody else is comfortable with, and where lines are. There’s probably some people who roll their eyes a little bit at things like that and see it as maybe a little bit cynical having intimacy coaches. I think it’s really, really helpful to establish boundaries, but also to help melt away some boundaries like personal self-consciousness and so on.

Outside of ‘Close To Me’, what other projects do you have on at the moment?

I’ve got a couple of films that should be out next year, both American projects one called ‘Abyzou’ and one called ‘Lovely, Dark and Deep, which I just finished shooting in Portugal. That was really good fun. There’s a TV series I’ve done, which is all shrouded in mystery. I’ve just done another bit on ‘Euphoria’ for the second series. I’ve got a project I’ve been working on privately, which is going to take up a lot of the run up to Christmas and into the New Year. It’s a personal project. All that stuff keeps me busy.

‘Euphoria’ has been one of the big breakout shows in recent times. What was it like to be a part of that?

I was a very small part of it. It came up and I didn’t really know exactly what I was letting myself in for but I really liked Sam Levinson, the director. He’s incredible and such an interesting guy. Filmmaking is like a second language for him. He’s very, very specific. He has all the edits in his head, all the kind of cuts that he’s making – all in his head – and the music that goes on. I think he writes all the music into the script. Watching someone like that work, it’s quite odd at times because he’s very, very prescriptive as to what he wants. When you trust somebody that much you just go with it. It is a really, really good series. It’s amazingly shot, and they’ve upped the ante even more on the second season. I love the way that he is able to write for young people and teenagers and it doesn’t seem patronising. It doesn’t sound like it’s a guy who is almost 40 writing for for teenagers, and he manages to deal with issues without it feeling contrived. He covers most of the hot topics of 2020/2021 but without it seeming in any way contrived or forced or worthy. He just kind of runs with. He’s a really talented guy.

You were also part of the ‘Strike’ series and appeared in the fourth story ‘Lethal White’. Those books and that series have become huge. What was it like to be part of that?

Similar to ‘Close To Me’ I saw the character and thought, ‘oh, that’s fun. I’ve not really done that before’. The main thing being is that if the character speaks to you, or something jumps out about the character and you think you can have fun with it. Sue (Tully) who directed it, is just a lovely person. She was in ‘EastEnders’ and it’s interesting watching her work, because she’s come up through really fast-paced TV. I’m pretty sure she started directing on ‘EastEnders’ and then has had this career since. What she’s got is an ability to communicate with every different department. As an actor, a lot of time, you’re sat in the makeup chair hearing makeup and hair bitch about this department or that department. Then you’re hanging out in between when things are being set up, and you’re hearing the grips having a moan. You’re learning what it is everybody needs on set and what everybody wants.

She’s obviously got a great way with actors as well but she just knew when she didn’t need to mess around on a scene. That can come from having shot ‘EastEnders’ where everything is so fast-paced. She wouldn’t waste time if she didn’t need to, which meant that the crew were really happy, and if we had to go over or if we had to ask him a bit more of people, people were generally cool with it, because they knew that they were being looked after by the director. Certainly, as an actor I felt like that. She really had our backs and communicated really well with us. One of the things that I like about my job is that you can then watch other really, really good people work, and learn about how they do it and what works and what doesn’t. She certainly had that. It was just a lovely team of people. The producers and everything were really cool. It had a good atmosphere around set and some cool locations as well.

Advertisement. Scroll to continue reading.
In this article:Channel 4, Close To Me, Featured, Nick Blood