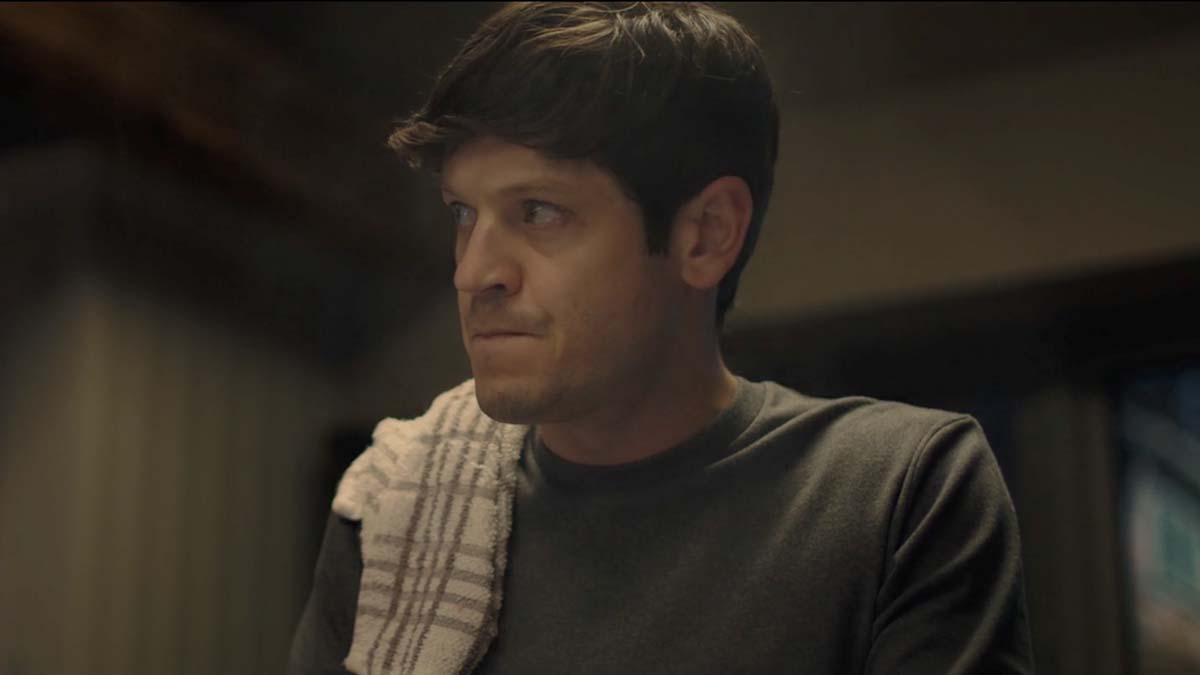 Adam (Iwan Rheon) and his girlfriend Evie (Catalina Sandino Moreno) invite their friend Lucas (Tom Cullen) and his girlfriend Chloe (Inès Spiridonov) over to the house they are living in and hoping to buy from Lucas. Initially playful, the interaction between the foursome begins to get intensify as secrets surface that threaten to turn the night into a very different one than any of them were expecting. As tensions rise, the four have to band together when a trio of masked intruders force their way into the house and hold them hostage.

‘Barbarians’ is the directorial and writing debut of producer Charles Dorfman, who has been involved with plenty of horror films including 2019’s ‘VFW’ and ‘Satanic Panic’. His film takes a very familiar trope and buoys it with a stellar cast, and if you’ve ever seen ‘You’re Next’ or similar films, you’ll know exactly what to expect. The first near hour of the film focuses on the slow-building tension between quiet writer Adam and alpha-male social media influencer Lucas. The two men begin the film being amenable and friendly but soon rivalry and underlying tension threatens to boil over. The women in their life – artist Evie and uber-fan Chloe – are left to observe what transpires over the course of the night, but one of them may be hiding a secret of her own.

The last 35 minutes is when the film switches from tense friendship drama to home invasion thriller. It’s quite the shift in gear and I’m not completely convinced that it really worked. The twist gives the four characters reason to put aside their differences but the eventual revelation of who the invaders are is a bit of a let-down, and seems incredibly far-fetched in the context of the story that Dorfman is telling here. There’s also plenty of imagery relating to foxes throughout that doesn’t particularly go anywhere, but it does manage to be unsettling (and give away a big clue as to what’s actually going on).

Another issue the film suffers from is the lighting. It’s near impossible to see what’s going on during some scenes in the finale and that pulls you out of the film. I watched it in a pitch black room and I could barely make out what was going on at times. For me, that meant the impact of the final 15 minutes was lessened.

On the plus side though, the cast is very strong led by superb turns from ‘Game Of Thrones’ star Iwan Rheon and ‘Weekend’ actor Tom Cullen. Their performances work together and they do tease out the tension between their characters in a satisfying way. Catalina Sandino Moreno and Inès Spiridonov get a lot less to do but they still make an impact as Evie and Chloe respectively.

‘Barbarians’ sadly suffers from being far too familiar. Perhaps if you’ve not seen this trope done to death, you may enjoy the tense ride but if you’ve seen other films like this, you’ll spot all of the twists and turns coming a mile off. I really wanted the film to surprise me but sadly it never did and the ending felt inevitable, as well as far too clearly sign-posted early on and with unnecessary title cards that pop up frequently to alert you to whereabouts in the story you are.