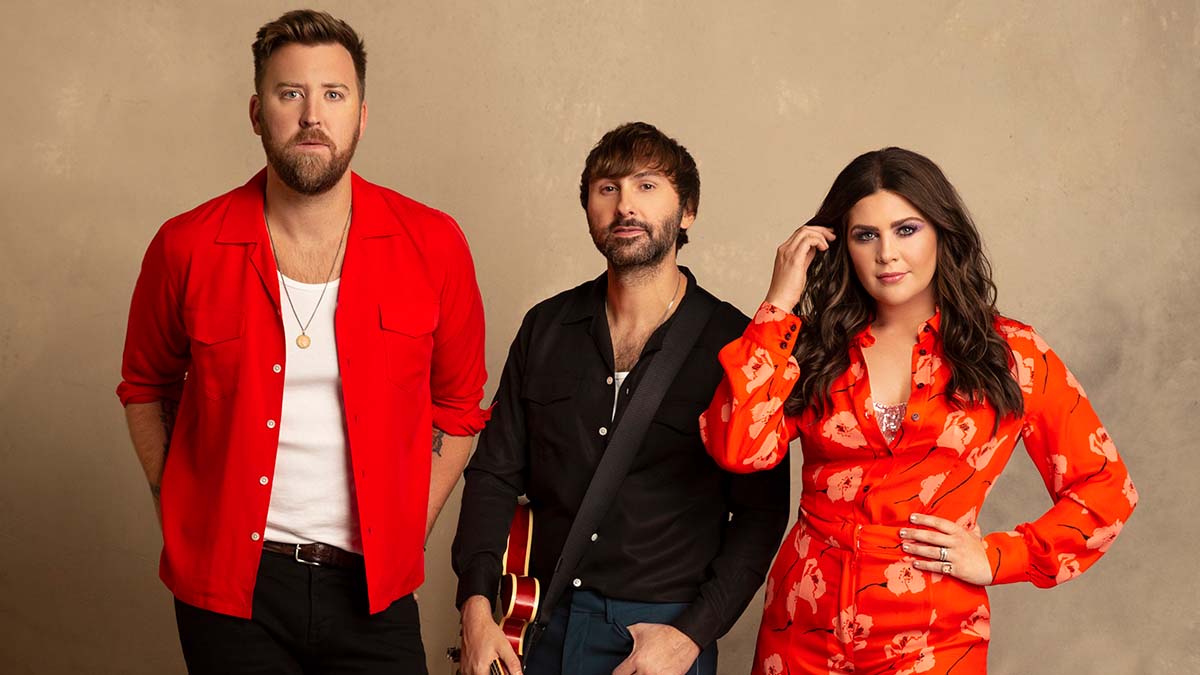 Lady A is without a doubt one of the biggest bands in Country music.

With numerous hits under their belts including ‘Need You Now’, ‘American Honey’, ‘We Own The Night’ and ‘You Look Good’, the trio is gearing up for the release of their new album ‘What a Song Can Do’ on Friday (22nd October 2021). The album features the hit single ‘Like A Lady’ and features a collaboration with Carly Pearce, Thomas Rhett and Darius Rucker.

I spoke to Lady A – Charles Kelley, Hillary Scott and Dave Haywood – recently to discuss making the new album, talk about their hopes of returning to the UK to tour soon, and find out more about some of the highlights on the record…

Your new album ‘What A Song Can Do’ features some of your best work yet. How are you feeling about the release?

Hillary: Thank you so much. We’re excited. Dave, you’ve used this word so often, but the gratitude we feel to get to do this after so many months of uncertainty. We’re finishing up a tour here in the States, we’ve got new music and we’re just so grateful for the opportunity to continue to be creative, and put that art out into the world and bring it to the stage.

Dave: Obviously we had to shut everything down in 2020 like everybody else so we just put our heads down and wrote. We really didn’t have a timeline. I don’t think anybody realised how long everything would go on for. We just wrote as much as we’ve probably ever written and had a big pile of songs to record from. It’s a lot of personal stuff and a lot of fun stuff as well. Looking back towards the road, we’ve been touring here in the US and it’s been really fulfilling to already be playing some of this material – ‘Like a Lady’ and ‘What a Song Can Do’ every night on stage. Every day feels like a gift these days. Every night on stage feels like a win and a gift. We’re feeling grateful to have new music and to be able to play it every night as well.

There’s so much variety on this record and that’s what I love about it. There’s a flavour for everybody. I get Fleetwood Mac vibes from ‘Waves’ and ‘Worship What I Hate’ always makes me cry. How important is it for you guys to get that balance?

Charles: Thank you, that that means a lot. We started thinking about some of the records that we really enjoy and I don’t really want to listen to a record that’s completely depressing or a record that is completely bangers the whole time. I feel like we have consciously always tried to have a real true balance on our record and because of that sometimes there’s special songs that don’t make the record because we already have something that’s in that similar vein. Coming off of this last year, we just felt like we wanted some uplifting music in there too to balance out some of the heavier material like ‘Worship What I Hate’ so that’s why we threw in ‘Like a Lady’ and ‘Friends Don’t Let Friends’ just to balance that out. It really is a conscious effort. We want it to be a bit of a journey. I’m always surprised at what are different fan’s favourites and it’s always across the board. Some people gravitate much more to the serious songs and others just really want to have a good time. I really enjoy, after a record comes out, seeing which ones rise to the top.

You mentioned ‘Friends Don’t Let Friends’, which features Carly Pearce, Thomas Rhett and Darius Rucker. I want to see you all together as a supergroup on tour. Could that happen on day?

Charles: I don’t know! I will say Darius and I have talked a lot about doing a big collaborations record with us and other artists. We’ve kind of kicked that around. I wrote this with Thomas Rhett and a couple songwriter friends, and when I played it for for Darius on the golf course he was like, ‘man I want to sing on this with you’. Then we needed another strong female voice on there alongside Hillary so we have Carly Pearce who’ve we’ve been on the road with all summer. It’s a fun song, man and I can’t wait to eventually get to perform it live, maybe on an award show or something. Those are three pretty power house vocalists that we get to sing alongside of.

‘Working On This Love’ is another song I’m drawn to, which is a solo moment for Dave. What’s the story behind that song?

Dave: Thank you very much. That was a song I had just written for my wife Kelly, for Mother’s Day of this year. Like you were talking about different flavours, different characters on an album, I love groups like the Eagles and Fleetwood Mac, when you just hear from one of the other band members in a different capacity. I showed it to Charles and Hillary and they loved it. I was like alright, ‘what if we just tried me taking a shot at one for this project?’ I think for fans, that know our journey and know what we all do and how we write our music and create, it’ll just hopefully be another character and flavour on there. Thank you for that. I love James Taylor and old acoustic guitar songs, that’s what I grew up playing, so it’s a more traditional feeling kind of melody and lyrics. Thank you for that. I appreciate that.

Lady A has been at the forefront of the growth of Country muisc outside of the US and you’ve spent a lot of time touring here in the UK. What is it like for you when you get to come to the UK and play?

Hillary: Oh, we love every second of it. Truly, when we look back over the timeline of our career and some of our most favourite shows that we’ve ever done, a lot of them are there (in the UK) whether they be at The O2 or when we played Shepherds’ Bush several years ago. Royal Albert Hall is on our bucket list. We would love to play there sometime. I know a lot of the artists who have played there have said it’s just magical so that’s one that I would love to get to at some point. We love it and we’re so grateful. We always love to hear the songs that really translate live. A lot of the time they are different than the ones that that really connect here in the US. The creatives in us love to see that and feel that, and we are counting down until we can return. We cannot wait to come back. The second we get the green light we would love to play more over there.

Charles: Especially a lot of songs off of ‘Ocean’ too. I know there was a lot of reaction to the song ‘Ocean’ in the UK. Just being able to mix up the setlist, like Hilary said, is going to be exciting for us when we come back over there and tour.

Dave: You guys are the answer to our question, ‘what’s your favourite place to play?’ a lot. We don’t blow smoke, we really mean it. Some of the highlights are getting to play London and Dublin, and they’re just some of the best fans. They really love the music that we love on the records too, like a lot of the ballads and mid-tempo and serious material. It’s an incredible experience. It’s one of the highlights in our career every time we get to play so we’re just waiting for that green light to come back over.

This is why we’re so excited for you to come back because you have two full albums of material that you’ve not had the chance to play live now. It must be exciting that you can come back with a completely fresh show packed with new material?

Dave: It’s like that on the road right now. We’re touring through the US and we didn’t have a chance to tour the album ‘Ocean’ at all so we’re going to play a few songs from that and obviously stuff from the new record. We all skipped a year and a half of being able to play. It’ll be I mean a couple years for us by the time we get there so it’ll be a lot of great material that we’ll be able to dig into.

Hillary: It’s making the shows go a lot faster too. I feel like earlier on in our career, even two albums ago, we’d hit that 75 minute mark in a show and we’d tapped out of the songs that people might know. We’re playing 90 full minutes here at these shows and we’re actually having to make some hard decisions on ones to not do or not do the full versions of in our show. To think about how to build a setlist, and Charles it’s your strong suit, when we come back, those will be exciting rehearsals. I can get just very, very excited thinking about it.

When you get back here, feel free to play 2-3 hour shows. We’ll stay for the whole thing…

Charles: We always do play a little bit longer over there!

As a fan and a listener, you seem so much more energised at the moment than perhaps you were just before the label switch ahead of ‘Ocean’. How do you keep things fresh and exciting when you’ve been doing this as long as you have?

Charles: I will say switching to Big Machine, just having really excited people on your side and on your team just re-inspires you. Every time we’re writing music, I’m sending songs to our team, to Scott and Jimmy, and getting immediate feedback. I haven’t felt that kind of energy from our team in a long time. It really does inspire you as an artist to keep trying new things. I think too, we’ve finally gotten to a point now where we’re trying to just put the music first. We’re trying not to write what we think is going to be a hit and just writing what we love and what feels good, and then just letting it take on whatever journey it takes. I think the minute you stop chasing that so much and just put the music first, is when you come out with your best material. I think songs like ‘Worship What I Hate’ and ‘What a Song Can Do’, that’s some of the most present, truly proud songwriting that we’ve been a part of in a long time.

Dave: I think it all just starts and ends with where we are as a band and our relationship, and our mutual respect for each other. We genuinely get along and love hanging out, love writing music and love being together. All of our kids play together. There’s a really fun family atmosphere with us. I think when we’re in this healthy spot too, it inspires each of us. We push each other to write different styles and we push each other lyrically to go to different places so when that’s working, I think it’s when the music really sings

Lady A will release new album ‘What a Song Can Do’ on Friday 22nd October 2021 via Big Machine Records. Watch the video for ‘Like a Lady’ below: