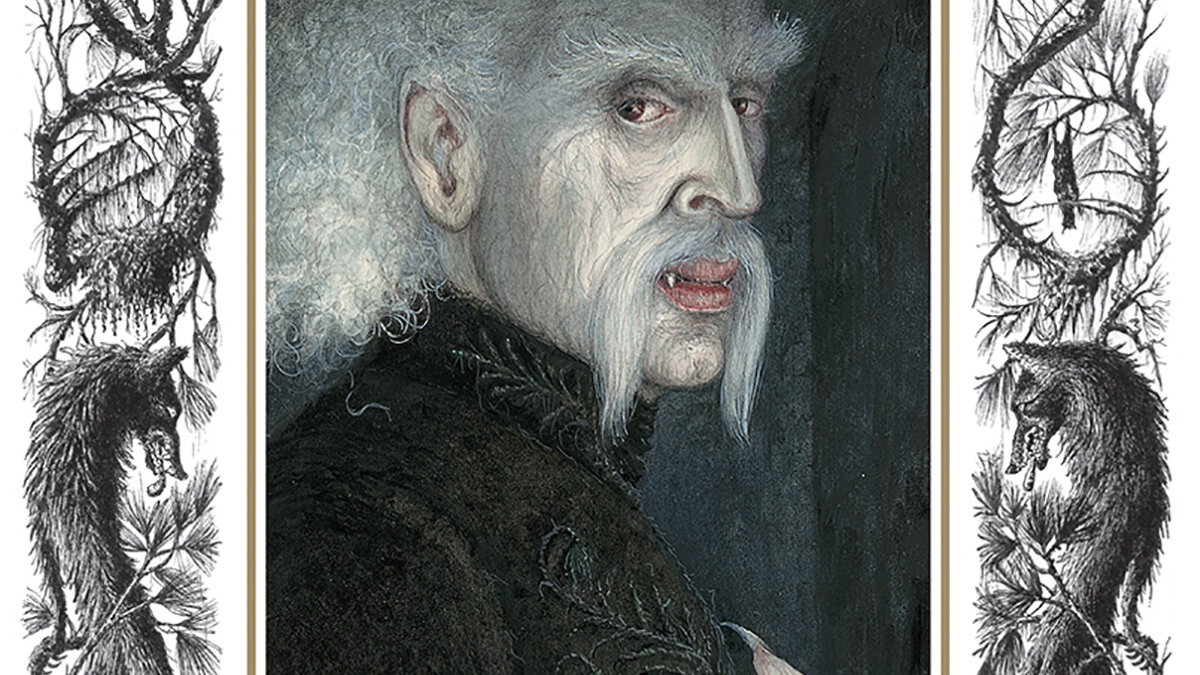 Illustration ©Angela Barrett from The Folio Society edition of Dracula

Childhood nostalgia is a precious thing. Often long-fossilised thoughts don’t withstand the scrutiny of fresh adult eyes. My fortieth birthday was spent in Whitby, where Dracula famously came ashore during Irish novelist Bram Stoker’s late Victorian Gothic horror novel of the same name. I wandered the grounds of the Abbey and the graveyard at St. Mary’s Church, which feature as prominent locations in the story. Stoker had stayed on the Royal Crescent, and the beautiful town was an inspiration to the author in putting together his masterpiece. I even bought a copy of the novel from a local bookseller, but I avoided returning to it for fear that it would diminish the memories of how completely entranced I was when reading it as a fifteen (or was it sixteen?) year-old.

Three years on from my fortieth, and the chance to read a luxurious new edition of Bram Stoker’s ‘Dracula’ from The Folio Society was an offer I could not refuse. Turning the pages, I was delighted to discover that the quality and power of the writing is undiminished by maturity. The prose surely resonates with readers now as much as it did in 1897 when it was first published.

We are thrown into the world of Jonathan Harker, a young solicitor charged with visiting his client, one Count Dracula, at his castle in Transylvania. There he is to oversee the purchase of a property in London. Told in first person narration through Harker’s diary entries, the opening chapters give readers a visceral account and land us directly in the horrifying world of the vampire. Wolves howling, an absence of a reflection in mirrors, seductive undead women in closed-off parts of the castle, invitations to cross over the threshold – many now-familiar tropes of vampire legend are quickly introduced. Stoker ratchets up the tension with each passing page, as readers begin to wonder how on earth Harker will escape from Castle Dracula with his life, let alone sanity. The description of the Count scaling the sheer castle walls with his fingernails, face down, still makes my skin crawl. The prose may be lurid, but it’s effective, and the first fifty pages are surely some of the most memorable in English literature.

Once the self-contained preface of Harker’s trip to Transylvania is finished, Stoker changes the point of view of the narrator, bringing in multiple sources to tell the story once we relocate to England. The first time I read it, I remember taking a while to settle to this new approach, having been so deeply invested in Jonathan Harker’s fate. I hadn’t appreciated just how cleverly structured the rest of the book is. It is told chronologically, alternating between several main sources. There are letters between the heroines Mina Murray and Lucy Westenra; the diary of Dr Seward, custodian of a lunatic asylum; Mina’s journal and return trips to Jonathan Harker’s journal. Interspersed within these multiple sources are newspaper cuttings and other supporting documents that give the text a sense of historical veracity. Most memorably, there is the captain’s log from the Demeter, the ship that bears Dracula and his crates of earth from the continent to England. That section of the book is perhaps the creepiest and most terrifying…

Reading ‘Dracula’ for a second time, many years after the first experience made such a vivid impression on me, I didn’t mind the multiple viewpoints of the narrator. In adopting different tones and linguistic affectations, Stoker showcases his talent at crafting believable characters. The women in particular are satisfyingly developed. It’s the raw sensuality of the ill-fated Lucy, but only after she is bitten, that is so notably provocative. It must have been even more shocking and unsettling for the more sexually reserved times in which the book first appeared.

The secondary characters have plenty of life breathed into them too. Quincey Morris, the American, is dependable and used to firearms and a way of life closer to nature. But Dr Seward’s old mentor Abraham Van Helsing is the real stand-out. Straight-talking and lacking in the British sense of irony and delicacy, Van Helsing is what would become the archetypal vampire hunter, sharpening his stakes as he drives the story in the second half of the book, once the hunted become the hunters. But in order to do that, Van Helsing has to convince the others of the evil they are up against. Cue one of the greatest sequences in the horror genre, as they desecrate the tomb of a dead friend, only to find the occupant stalking the town looking for fresh children’s blood!

‘Dracula’ remains an exciting page-turner and a deeply satisfying horror novel. Stoker’s ingenious narrative technique raises it to the level of a literary classic, but even some moments of purple prose can be enjoyed for the vividness of the descriptions. Its themes played on the contemporary panic about Jack the Ripper, the serial killer who was at large in London only a decade before the book was published. Darkness, death and the unknown are eternal human fears, and be warned, Stoker exploits all of them with the skill of a master craftsman. Incident-packed and scary, ‘Dracula’ is the perfect Halloween reading material. Keep the lights low and surround yourself with silence for maximum effect. Maybe have some garlic flowers to hand, just in case. Bram Stoker’s ‘Dracula’ isn’t still a popular book over a century after its publication just for a few entertaining characters, but as I was delighted to confirm, because it’s a triumph of horror fiction in its own right. My teenage self was quite correct to be blown away by the book, and my adult self fell hopelessly in love with the characters and the story all over again. Now I want to return to Whitby…

The Folio Society’s new edition of the book is crafted to their customary meticulous standards. It has a striking black hardback with silver embossed bat silhouetted against a full moon slipping into a swirling blood-red case. The top edges of the pages are coloured deep red, too. Interspersed within the leaves are fifteen full-page colour illustrations by Angela Barrett. They evoke the late Victorian era by framing the paintings with intricate, stylish and detailed borders. Smaller, simpler ink drawings, such as of a crucifix, appear at the ends of chapters. An introduction by contemporary Irish novelist John Banville provides a modern context for the book within.

In this article:Bram Stoker, Dracula, John Banville, The Folio Society