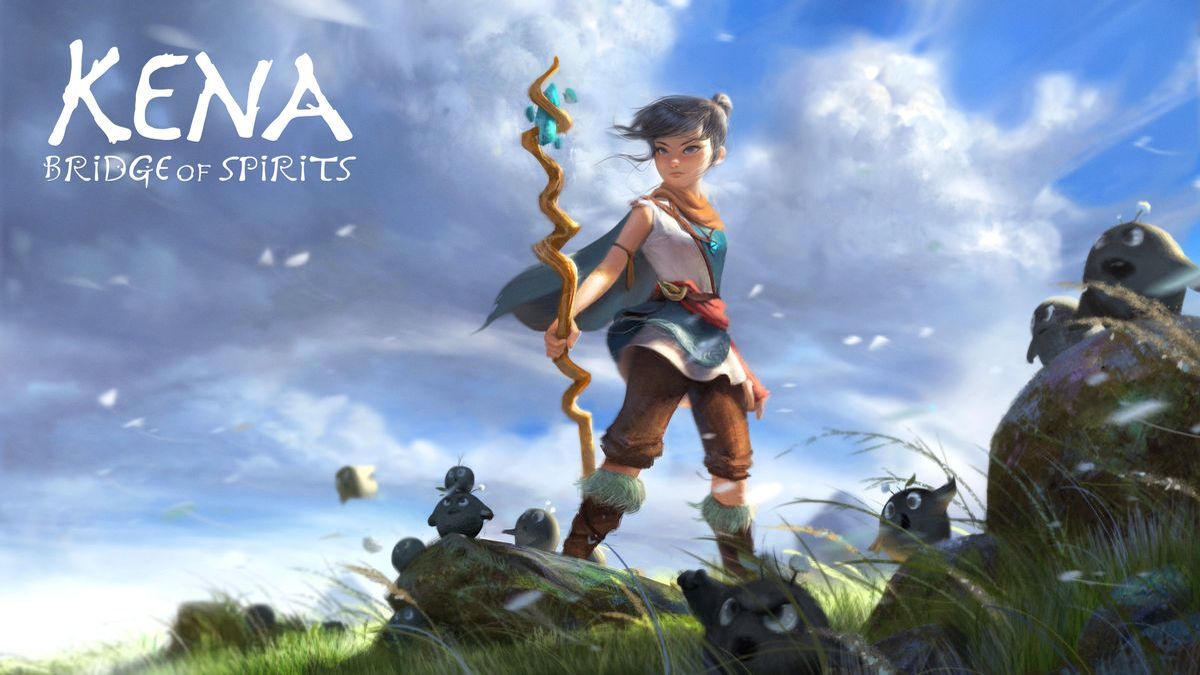 When Sony was gearing up to showcase the PS5, they announced a bevvy of beautiful games and one game stood out in particular. Yes, that game was Kena: Bridge of Spirits. This intriguing looking game is from Ember Lab. Never heard of them? That’s because this is their debut title. There’s a lot of pressure on the studio, hopefully, they rise to meet the challenge.

Kena is a young girl who comes from a long line of spirit guides. When someone dies, their spirit may become trapped between our world and the spirit world and it’s the job of the spirit guide to send them on their way. Kena is aiding spirits while she completes her pilgrimage to the sacred mountain shrine when she comes across an abandoned village. The village elder informs Kena that to make it to the shrine she must absolve the spirits of the villagers. Kena happens upon the spirits of two young children who ask her to help their elder brother, whose spirit has yet to move on. As Kena moves closer to him she sees his spirit has been corrupted and realises there may be something going wrong with this village.

We’ve seen this type of spirit trope a million times and Kena: Bridge of Spirits plays this card pretty close to the chest. Though this isn’t a weakness. Each spirit has a well-crafted backstory that tugs at your heartstrings and the overarching story has a strong enough hook to keep you invested. It’s not groundbreaking but it’s quite well written. The characters are what sell this simple story, Kena is a sweet girl trying to help everyone she can and the various people she meets are interesting and nuanced enough to make them distinct from one another. The game isn’t afraid to get a little dark too, but it’s still in line with what a kid can tolerate. I was entertained throughout the whole story, even if it did tread the same ground a little too often.

Kena: Bridge of Spirits is an adventure game at its core. The village acts as a hub and when you arrive there, it’s completely overrun with corruption. You follow the paths at the sides of the village on your adventure, and what surprised me at first was how big the game is. I was expecting something akin to a game like Knack but this is on a scale like the Tomb Raider reboots. It’s a standard affair, with basic platforming elements and light puzzles, there have been Zelda comparisons thrown around but to me, it was a little closer to Tomb Raider.

Rot is a major focus in this game and no, it’s not the mouldy rubbish that stinks, here Rot are cute little Ghibli-esque fluff balls. Kena collects these little guys via story beats or hidden in the world. They operate very similarly to the minions from the Overlord games, you direct them where to go and who to fight. When it comes to traversal, they’re used to open up paths and pick up things, like statues to complete puzzles. Kena also acquires a hook-shot style ability and other forms of magic to further explore the world. Why do you want to explore? Well, you earn currency and you can buy little hats for the Rot. They follow you everywhere, so you want them to look good!

Combat is a big focus of the game and you’ll be trading blows with plenty of nasties. Kena has a simple combo system and dodge roll, as well as a magic shield similar to Super Smash Bros. That alone would see Kena die as quick as a marshmallow would to a flamethrower, so her little Rot friends lend a hand. Once a meter has built up a ‘Rot action’ can be performed. This has a few uses, the Rot can hold an enemy in place, infuse your arrows to create a massive explosion or even form a hammer to lay down a huge long-range strike. Mixing up these attacks is vital for survival……..on higher difficulties. On the easier and even normal difficulties, this game is pretty easy. The combat is okay, it’s pretty pedestrian, even the boss battles don’t get the blood flowing too much. But as a ‘God of War for kids’ style, it gets the job done and is inoffensive. I will say I’m not a fan of the stiff combat roll and some animation transitions in combat aren’t quite solid enough for my liking.

Ember Lab made their name as an animation studio and holy hell does Kena: Bridge of Spirits look great. The pre-rendered cutscenes are impressive enough to pass as a Pixar film and the in-game graphics are no slouch either. The use of colour and top-notch lighting really help the game visually. Voice acting is good across the board and the soundtrack is stunning. The PS5 version of the game offers up 2 modes. A 4K/30 and a roughly 1440p/60. The 60fps mode is great but can look a little muddy. The 4K version looks incredibly crisp but is obviously limited to 30fps. Other than the expected Unreal Engine pop in, there wasn’t anything noticeably wrong with the game.

There are small little inconsistencies with the game, like with the stiff animations and some parts of the levels look like corners have been cut to hide something that might be unfinished and then I remember that this is a debut title from a tiny team and I can’t help but be really impressed with what they’ve done. The story is quite strong, the characters are all great, collecting the Rot reminds me of Spyro dragon eggs and running around purifying the world gives me huge Okami vibes. There’s so much this game does right, that the small ‘issues’ become irrelevant. Ember Lab have done an excellent job, I hope Sony continue to support them because if they keep this up, they could become a top tier developer quite quickly.

Kena: Bridge of Spirits was reviewed using a digital code provided by the publisher.