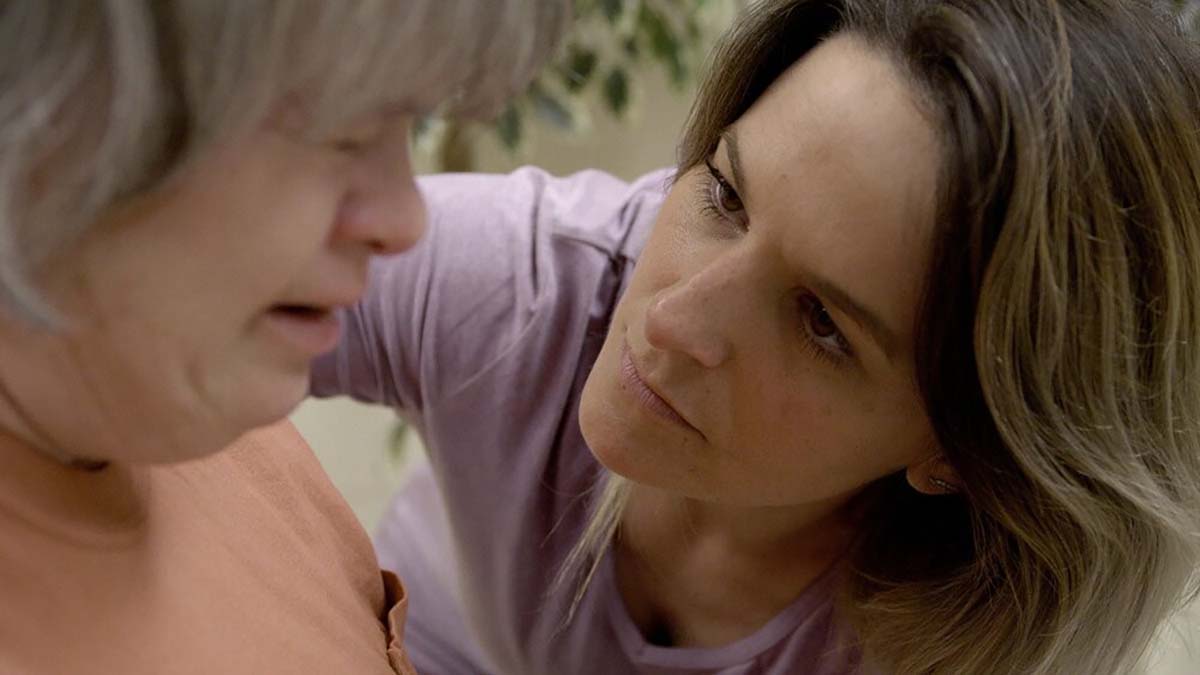 After escaping from a cult Katie (Katie Groshong) tries to turn her life around by taking a job working with special needs adults. Determined to leave her past behind, Katie throws herself into working at the care centre where she bonds with Down Syndrome patient Stephanie (Stephanie Kinkle). Before long Katie is plagued by memories of her time with the cult and when Stephanie begins to get sick, Katie panics that the devil is coming after her.

‘Dementer’ is an ambitious film from director and writer Chad Crawford Kinkle that aims to do something different in the horror space. Part of the reason he created the film was to represent the developmentally disabled inspired by his sister Stephanie who has Down Syndrome. With a miniscule budget, Kinkle has managed to put together a film that feels like a documentary and packs in plenty of atmosphere and chills.

Opening with flashes of a naked woman fleeing from something, ‘Dementer’ cranks up the atmosphere before establishing the very real setting of a care home for disabled adults. We see Katie talk her way into a job and then put her all into it, as she battles with flashes of her past. She’s barely gotten her feet under the table when she starts to see signs of ‘the devil’ so she begins to carry out rituals to try and ward the evil spirit off. You can feel Katie’s despair and frustration when she believes her rituals aren’t working and that an evil force is coming to Stephanie.

The majority of the cast of the film are non-professional actors with the notable exception of lead Katie Groshong and a small role from Larry Fessenden. Honestly, you wouldn’t know because Kinkle elicits very natural performances from is cast and as an ensemble they really impress. Groshong makes for a very strong heroine, playing her character with impressive restraint and uncovering the caring and loving side of her that was lost during her time in the cult. The bond that Katie makes with Stephanie forms the heart of the film, and it gives you something to root for.

Perhaps where the film could have benefitted is by fleshing out the story a little more. Katie’s past in the cult is used to drive up the tension but we don’t ever really find out exactly what her time there was like. Sure there are hints and tidbits here and there, but it would have been nice to explore that a little bit more. Similarly, it’s never explained why Stephanie is targeted so a little more context around that would have been welcome too.

‘Dementer’ is an admirable effort and while it may not completely hang together as a cohesive narrative, Kinkle brings plenty of fresh ideas to the table. It’s refreshing to see a horror film that doesn’t use disability as a plot device or a scare tactic, and Kinkle handles that aspect with respect and sensitivity. You feel for the characters that Katie is looking after and you care about what happens to them. I’ve never seen a horror film quite like this before and I’ll be on the lookout to see what Kinkle does in the future.