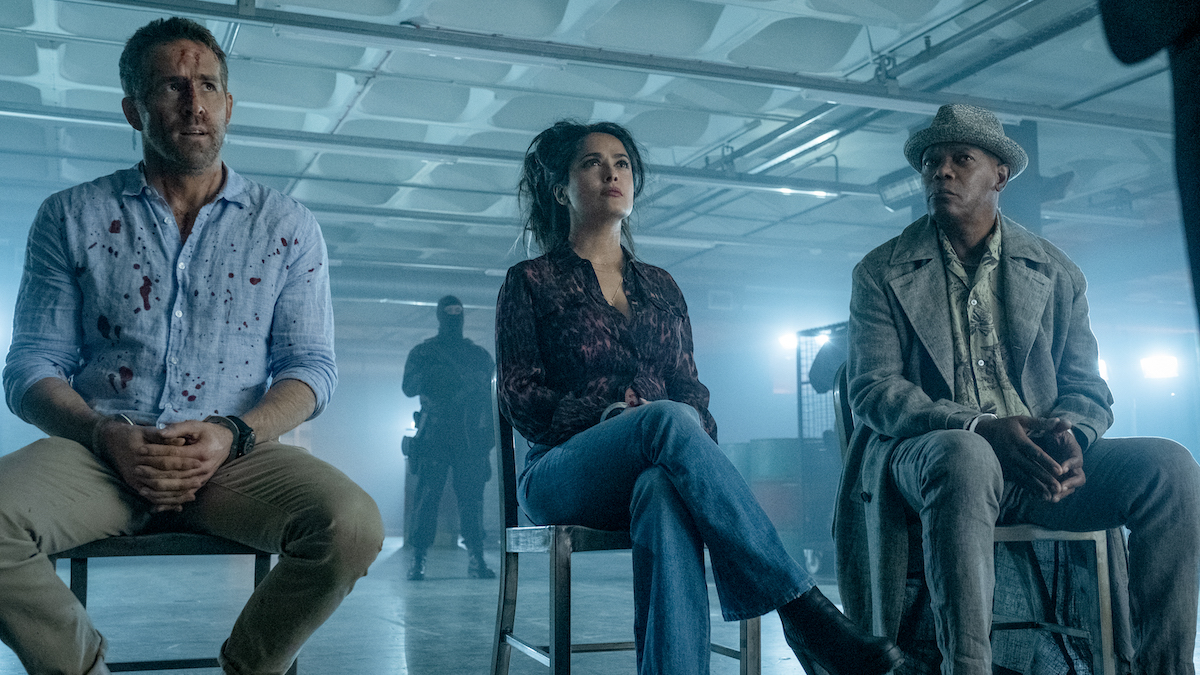 There’s no point in burying the lede with this one. If it weren’t for the fact that I had to write a review of ‘Hitman’s Wife’s Bodyguard’, I would have turned it off after ten minutes. From the horrible title (which is inaccurate btw), to the smarmy tone, and the dull, weightless action, there is literally nothing to recommend about this pointless and painfully unfunny sequel.

A follow up to 2017s ‘The Hitman’s Bodyguard’ (a film so memorable I had to read the Wikipedia page to remind myself if I’d even seen it) this film finds the titular bodyguard Michael Bryce (Ryan Reynolds) trying to come to terms with the events of the original. He’s been stripped of his bodyguard license and is now in therapy, still haunted by Darius Kincaid (Samuel L. Jackson) the psychotic hitman he was hired to protect. A relaxing vacation is quickly ruined, when Kincaid’s wife Sonia (Salma Hayek) tracks Bryce down as she needs his help to rescue Darius from the mafia.

Meanwhile, a Greek billionaire played by Antonio Banderas is planning to wreak havoc on the EU, by unleashing some sort of technological terror which will wipe out all power and telecommunications across the continent. An Interpol investigation into this crosses paths with our mismatched trio, and soon the hitman, his wife, and the bodyguard are recruited to save the day.

To be honest, the plot is pure chaos, and completely incidental to what returning director Patrick Hughes is aiming for, which apparently is to drown the film in as much noise as possible. From the word go the film is pitched at an annoyingly shrill level. It’s just shouting, screaming, shooting, and swearing for 100-minutes, but without any of the wit, imagination, and craft required to make any of those things good.

The schtick between the main characters wears thin very quickly. Reynolds is allowed to indulge in the worst excesses of his quippy screen persona, whilst Jackson just says ‘motherfucker’ a lot. Salma Hayek brings the most energy to the party out of the three of them, but the screeching vulgarity stops being funny after the first scene, but sadly continues for the entire film. Frank Grillo as the grizzled Bostonian Interpol agent is the one fun addition to the cast, but the film then forgets he exists for about an hour, before shoehorning him back in for the final scene.

Perhaps if the action was any good you might be able to look past all the other problems with the film, but it’s not. It’s staged in the most pedestrian manner, mostly in the service of allowing Reynolds and Jackson to argue with each other in increasingly unfunny ways. Add in the god-awful needle drops, and the grotesque tonal mish-mash, and it all comes together as one of the worst films of the year.

The blu-ray release is garnished with a few bonus features. First up is ‘Ryan, Sam, Salma: One F’d up Family’ which is a ten-minute featurette going behind the scenes with the main cast and crew, discussing the central relationships in the film. ‘Gone Soft: The new Michael Bryce’ is more of the same, but focused on Ryan Reynolds’ character. There are two more clips, one looking at the stunt work in the film, and another which takes a fleeting glance at some of the production design.

I always enjoy watching these featurettes when the film is terrible, as you can either see the actors and filmmakers dying inside (a la the now infamous Ben Affleck ‘hello darkness my old friend’ meme) or you get to hear what it is they thought they were making. With this, I got the sense it was very much the latter. They genuinely thought they were making a really fun and unique action-comedy. The final special feature is a gag reel comprised mostly of alt takes of Reynolds improvising. It is as laugh free as the film.

‘Hitman’s Wife’s Bodyguard’ is out on digital, DVD, Blu-ray and 4K UHD now.