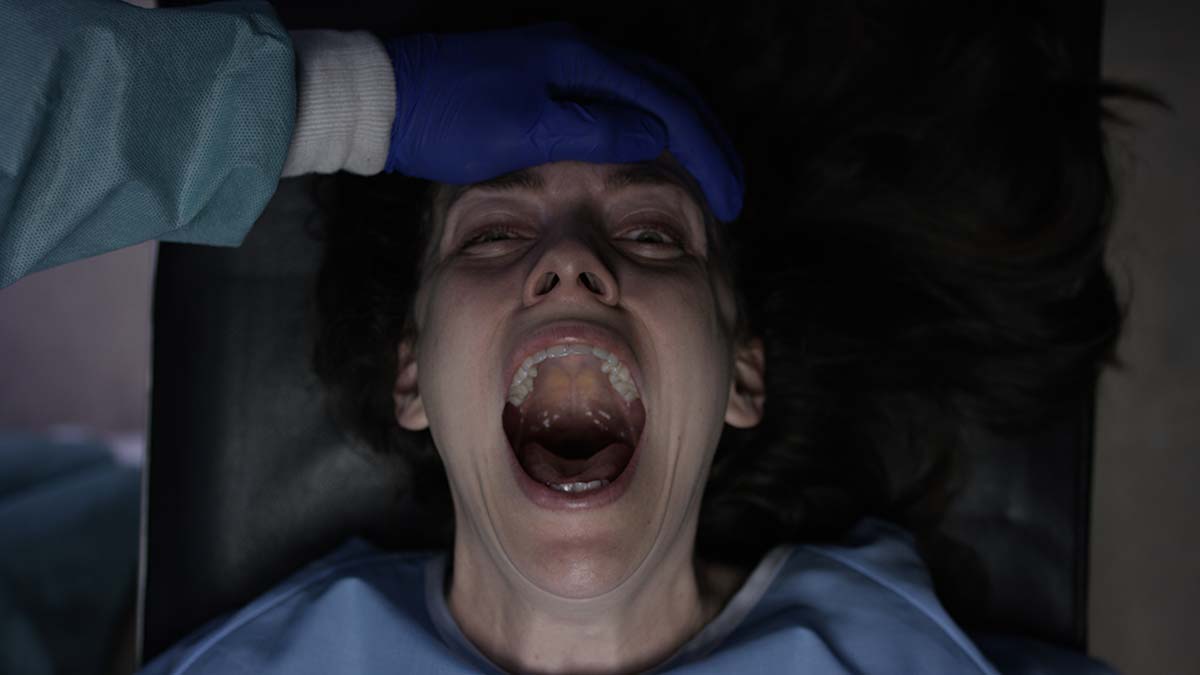 Sharyn (Ashlynn Yennie) is taken into hospital for an emergency appendectomy but when she wakes up, she finds herself in an underground medical facility. Unsure of how long she’s been there, Sharyn is horrified to discover that the other patients are being experimented on by twisted doctor Aaron Hellenbach (Louis Mandylor). As Sharyn tries to find a way out of the facility, she has to face up to her past and reveal secrets she’s long-kept buried.

From director Peter Daskaloff, who co-wrote the screenplay with Matthew Toronto, ‘Antidote’ aims to play on your worst fears and for the most part it succeeds admirably. When she wakes up, Sharyn feels disoriented and you can’t help but feel that with her. As she tries to understand her surroundings, she witnesses other patients in the facility being perpetually tortured and mutilated. Trying desperately to find a route out, Sharyn locks horns with Hellenbach but try as she might, she can’t seem to escape.

‘Antidote’ is a bit of a headscratcher and you’ll be as confused as Sharyn, at least for the first 30-minutes of the film or so. Glimpses at Sharyn’s past suggest that something she has done prior to arriving at the facility, set off this horrific chain of events. As Hellenbach pushes Sharyn to be honest with him, she’s haunted by the death of an ex-boyfriend whom she was in a toxic relationship with. The harder she tries to escape, the worse her treatment gets with Hellenbach and his team trying experimental procedures and using a mysterious serum to repair the damage.

Along the way Sharyn befriends some of her fellow patients including Cassandra (Augie Duke), a woman who is repeatedly burned alive before being healed. The two women form a bond borne purely out of wanting to either get out of the facility or to die. The stakes feel high and director Daskaloff really piles on the tension.

Ashlynn Yennie is a strong lead for the film, really making Sharyn into a fighter and ensuring that you believe the character (regardless of whether she’s telling the truth). Even though you know there’s something dodgy about her, you still root for her to survive and escape the situation she finds herself in. Louis Mandylor has a lot of fun as Dr. Hellenbach and he’s a worthy adversary for Sharyn. His performance is chilling at times and I really enjoyed watching him on screen.

For the most part ‘Antidote’ looks great and is a well-made film. There’s a sequence in the climax that is a little jarring, and while I appreciate what Daskaloff was trying to do (and with a limited budget), I think it could have been done without the use of CGI. It’s not a big deal but it does pull you out of the film a little right at the crucial moment when everything is ramped up to nail-biting.

‘Antidote’ is a solid horror-thriller and it will keep you engaged right through to the final scene. There are plenty of clever twists and turns along the way that I doubt you’ll see coming, and the film certainly caught me by surprise. If you’re squeamish about experimental medical procedures, you may struggle through many of the scenes here but if you’re game for a film that’s trying to do something a little different than what we’ve seen in the genre before, then ‘Antidote’ should definitely be on your ‘to watch’ list.