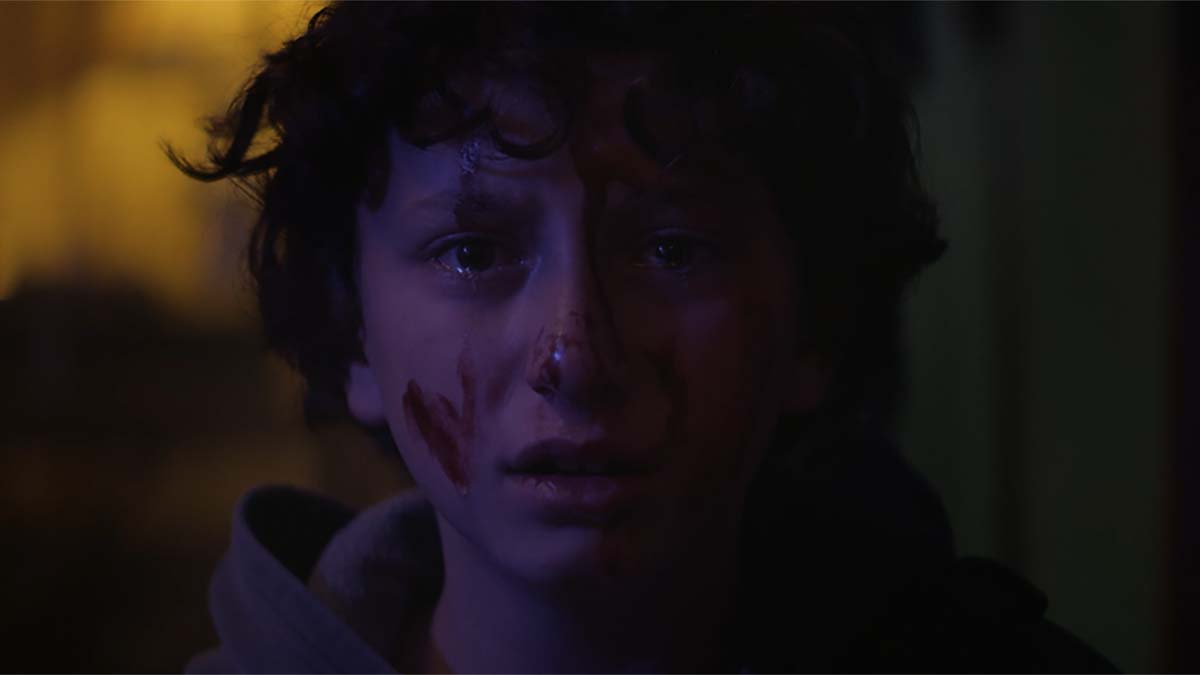 Lucas (August Maturo) is cared for by his borderline alcoholic older brother Tom (Mike Manning) following the death of their mother in a car accident. Sharing a strained bond, the brothers indulge in a game called ‘slapface’, where they take out their pain and aggression by repeatedly hitting one another. A loner, Lucas hangs around with three girls who bully him and after agreeing to a dare to impress them, he encounters a monster in a dilapidated building. With no one else to turn to, Lucas builds a strange friendship with the monster, causing his behaviour to become increasingly more disturbing.

‘Slapface’ by writer/director Jeremiah Kipp is based on the short of the same name and it explores the impact of trauma and bullying on a young child. At the centre of the story is Lucas, an outsider whose only release is wandering in the nearby woods on his own while embarking on a secret relationship with Moriah (Mirabelle Lee), one of the three girls that bullies him and makes his life hell. The film opens with a shocking sequence as we see Lucas and Tom playing slapface for the first time. It’s unsettling to see a grown man aggressively hitting a child, and this game the brothers play draws the attention of Anna (Libe Barer), Tom’s new girlfriend who questions whether he is actually abusing his brother.

With no parents to guide him, Lucas forms a close and intimate bond with the monster he discovers and regularly visits it to pass the time of day. Anna grows concerned about Lucas’ whereabouts on a day-to-day basis but Tom dismisses her concerns as he sinks another beer, and ignores his responsibilities. Lucas’ behaviour also draws the attention of the local sheriff (Dan Hedaya), who has been looking out for the boys since the death of their parents but even he is at the point where he feels he can’t do anymore for them.

The monster is essentially Lucas’ escape from being bullied. It’s the one thing in his life he feels he can rely on but as the monster exerts more control over him, and becomes aggressive towards anyone that harms him, Lucas fails to see the warning signs before it’s too late. The monster begins to leave the dilapidated building, edging ever close to the people in Lucas’ orbit, and the feeling of dread you can’t shake off grows deeper and deeper as the film goes on.

As an exploration of child abuse, bullying and trauma, ‘Slapface’ is unflinching and incredibly emotional. When I sat down to watch the film, I didn’t expect that I’d be wiping away tears multiple times during it but that’s exactly what happened. The pain that exists between Lucas and Tom is too much to bear at points, in large part thanks to the incredible performances from August Maturo and Mike Manning. Maturo gives a performance way beyond his years, showcasing a maturity and talent that left me in awe. The biggest surprise for me though was Mike Manning, a former reality TV star who is one of the producers of the film, blew me away with his turn as Tom. His performance was nuanced, emotional and memorable.

With ‘Slapface’ Jeremiah Kipp has created one of the best horror films I’ve seen in a long time. Basing the story in reality and adding a supernatural element to drive that point home is very effective. During the film I felt scared, anxious and like my heart broke on more than one occasion. Tackling subject matter like this is not easy but Kipp does it with sensitivity, building a story that hits you in all the right places and leaves you devastated. Without a doubt, this is the finest film at this year’s Arrow Video FrightFest and it’s one of the best films I’ve seen in a long time.