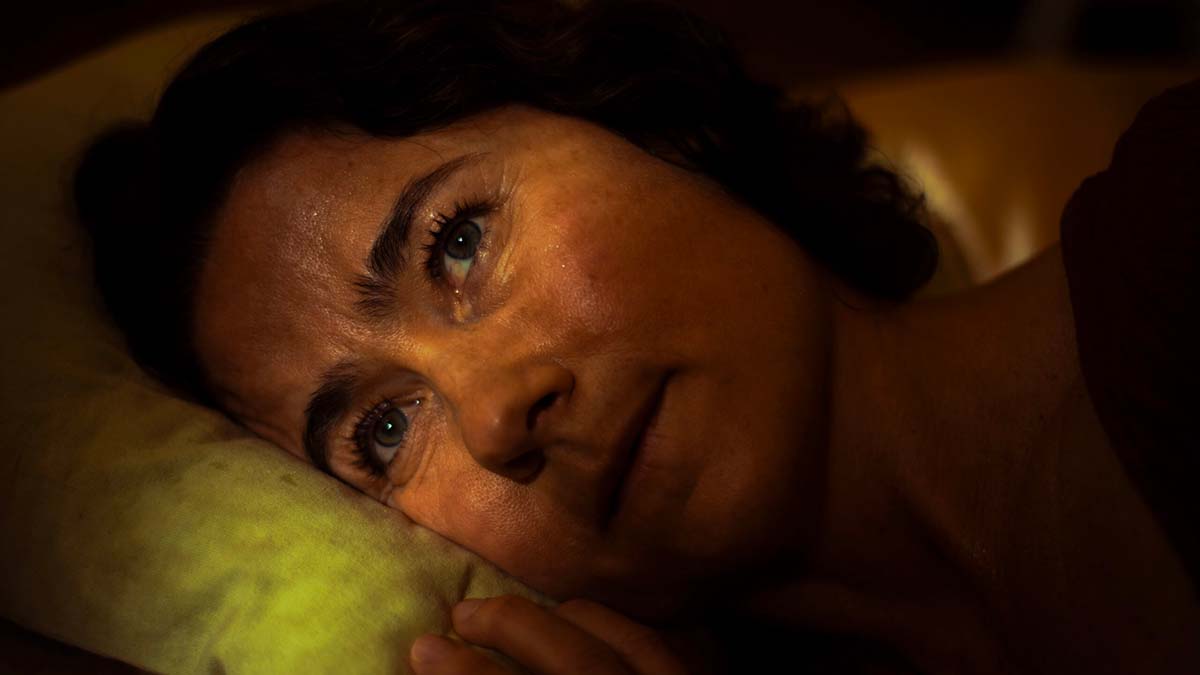 Molly (Cecilia Milocco) finishes her time in a psychiatric ward after having a nervous breakdown following a tragic event in her life. Readjusting to life again, she moves into a new apartment building in the hope of having a fresh start. Before long, she starts to hear knocking through the ceiling and the voice of a woman begging for help. When Molly appeals to her neighbours to help her, her pleas fall on deaf ears and she begins to wonder if she’s really hearing noises or if she’s going crazy.

‘Knocking’ is based on a short story by Johan Theorin and has been adapted for the screen by writer Emma Broström and director Friday Kempff. A claustrophobic psychological thriller, ‘Knocking’ is an exploration of a woman going through grief whose mental health is questioned by everyone around her. A quiet and introspective woman, Molly keeps herself to herself when she moves into her new apartment and you get a sense that she’s someone who hasn’t fully dealt with the tragedy that led to her nervous breakdown.

Once the knocking starts, you do wonder whether it’s a figment of Molly’s imagination due to the trauma she’s suffered or if she is actually hearing someone begging for help. The film makes you doubt Molly throughout and much like the people around her, you begin to worry that she’s heading towards another nervous breakdown. Director Kempff makes the film feel incredibly claustrophobic, at times using the camera to put you in Molly’s shoes. Those moments are intense and disorienting, but they give you a feel for the anxiety and panic that Molly is experiencing.

Relatively short at 78 minutes in length, ‘Knocking’ builds very nicely and keeps you on your toes as you try to figure out what’s going on. Molly is convinced someone is holding a woman against her will but her suspicions are dismissed at every turn to the point where she begins to question her own sanity. Do the neighbours know what’s going on or are they unaware? That’s something Molly tries to get to the bottom of and the viewer does exactly the same.

Despite a great build up, the climax is unsatisfying and lets the film down. The reality of what is (or isn’t) going on is revealed in the final moments but it’s done so in such a way that I felt completely cheated. I can’t say too much more without giving away what happens but the story deserved a better ending than it gets.

Regardless of the disappointing end, the performance of Cecilia Milocco is magnificent. She throws herself into her role as Molly and you absolutely root for her from the beginning. I found myself desperately wanting her to be right and Milocco’s performance is packed with nuance and emotion. What Molly goes through is hard to watch at times but Milocco always ensures you stay on her side.

‘Knocking’ sadly does squander its potential, which is such a shame as the first hour is fantastic. Perhaps the ending will work for some viewers but it was a big let-down for me. As a psychological thriller, the film is very effective and it’s a fantastic showcase for the talents of Milocco. As a satisfying horror, it falls short of the mark and you can’t help but feel that could easily have been rectified.