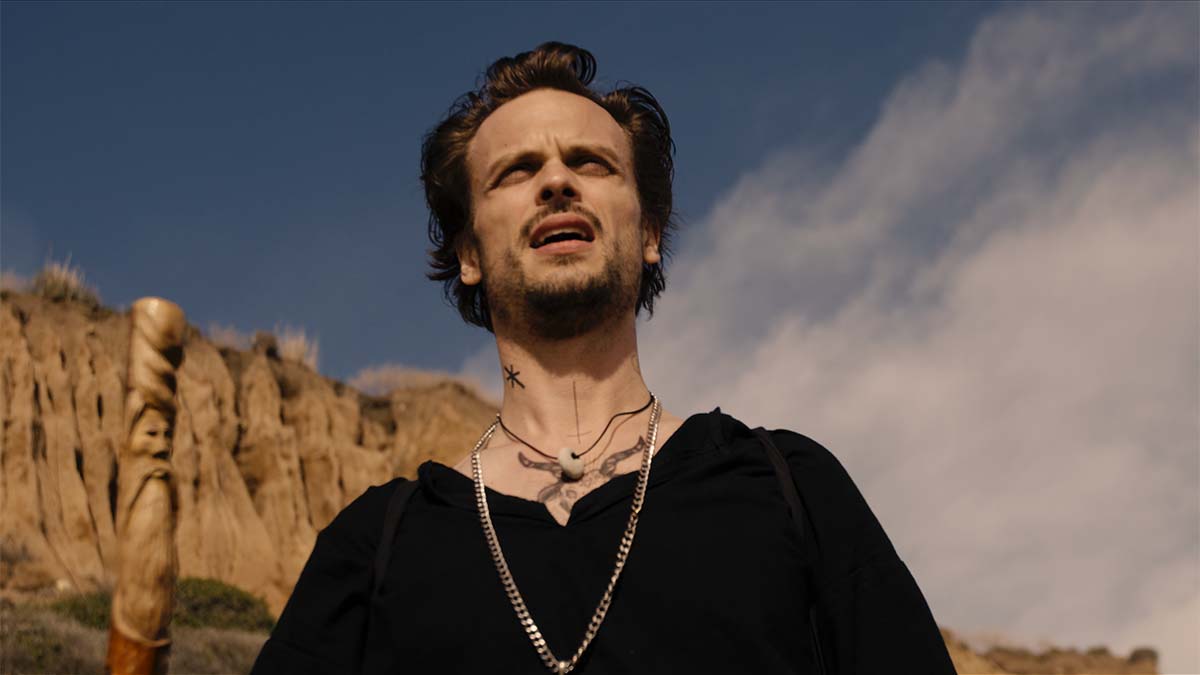 Thorn (Matthew Gray Gubler) and his wife Willow (Angela Sarafyan) are the leaders of a modern-day coven of witches in a small California community. Hiding his former life from his wife and his coven, Thorn is thrown into turmoil when he receives an invite to his high school reunion. When Willow catches wind of the invite, she forces Thorn to come clean to his coven and he’s promptly banished. That sends him on a journey of self-discovery as he reconciles his past with his present.

‘King Knight’ is the latest film from Richard Bates Jr. (‘Excision’) and it’s very different from what we’ve seen from him before. Most horror fans will know him for his darker material but with this film, Bates Jr. steps into comedy for a quirky and wacky adventure. It’s established very early on that ‘King Knight’ isn’t going to be a horror film and it’s not your typical comedy either. The ensemble cast of characters is introduced in a stylish way that makes you forgive the heavy exposition, and the film wastes no time getting to the bones of its story.

Thorn and Willow appear to have the perfect relationship but the cracks soon show when Willow feels pressured to get pregnant. Add to that Thorn’s strained relationship with his battle axe mother (Barbara Crampton), who has never met his wife, and there’s clearly plenty to unpack. Once Willow discovers Thorn’s secret, the wackiness cranks up a notch as Thorn is banished from the group and he makes his way to his high school reunion. There are some seriously random moments along the way, which are varying degrees of amusing, but the film does start to lose focus of its central premise in favour for delivering general scenes of weirdness.

What can’t be faltered are the performances of Matthew Gray Gubler and Angela Sarafyan. While both are known for their TV work, they commit to their roles here admirably and prove that they can more than carry a film. Gubler is suitably zany as Thorn and he has a warm screen presence that makes you want to root for him. Sarafyan on the other hand plays her role a little straighter but showcases a knack for comedy that I haven’t seen for her before. Together they carry the film on their shoulders, but their performances are a worthy pay-off, even if you’re not completely sold on the story.

‘King Knight’ is an odd film that’s wryly amusing but never particularly laugh-out-loud funny. It’s a very odd pick for a horror festival (the only link to the genre appears to be the fact that the characters are witches) but I’m sure it’ll hit the right mark with some festival goers. For me, it wasn’t as funny as it could have been and it didn’t lean into its weirdness enough. Due to its short run-time, it certainly didn’t outstay it’s welcome but its plot did leave me wanting for more.