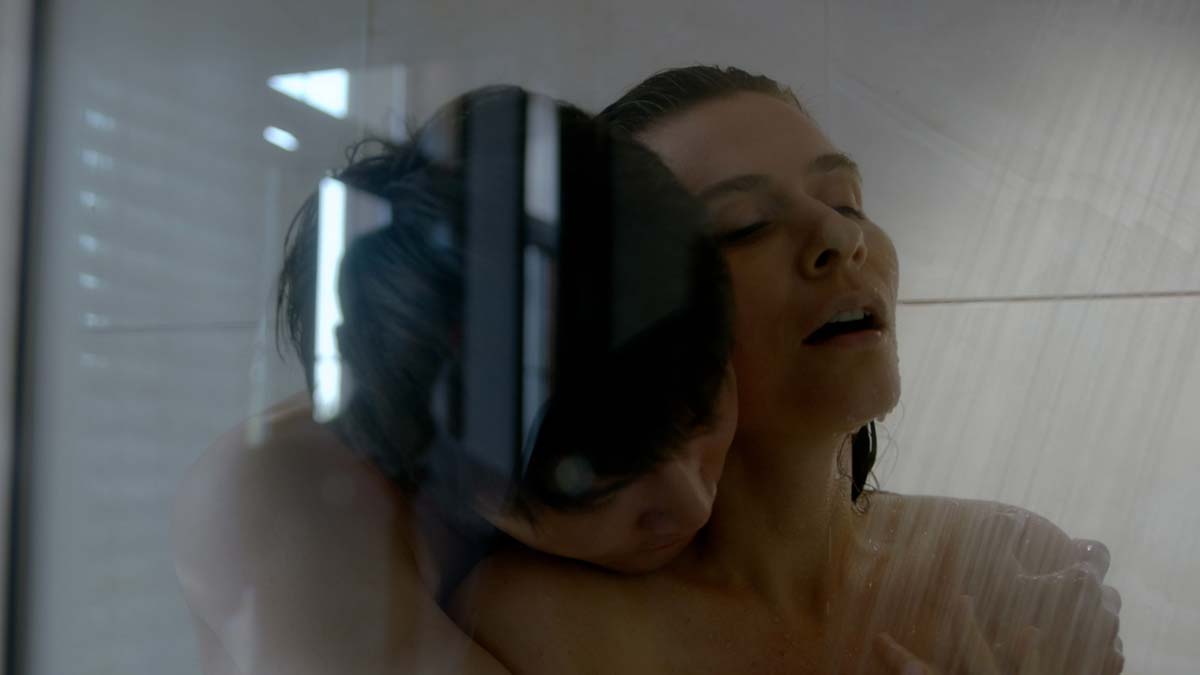 Fei Fei (Aleksandra Szczepanowska) is a Caucasian woman that has settled in China with her husband Zhang Hua (Jun Yang) and their son Mo Mo (Beckhan). Struggling to get permanent residency in the Country she loves and terrified she’ll get separated from her family, Fei Fei begins to feel displaced. She meets blind masseuse Bai Yu (Jiangwei Yuan), whom she immediately connects with sexually and the two embark on an intense affair. Worried that her husband has found out about them, Fei Fei tries to cool off her fling but Bai Yu isn’t ready to let go of her.

‘Touch’ is a ‘Fatal Attraction’ like story set in China that is written, directed, executive produced and stars Aleksandra Szczepanowska. Any worries that this may have been an indulgent passion project disappear within minutes as Szczepanowska proves herself to be quite the multi-talented artist. While the plot of ‘Touch’ may feel familiar, Szczepanowska ensures that it goes deeper than you’ll expect and the film is a fascinating study of a woman who fears she’s losing her place in the world she loves.

Fei Fei is a complicated character. On the surface she seems like the perfect housewife who enjoys teaching dance on the side, but once the layers peel away, she’s revealed to be a woman with reservations about her husband that isn’t as secure in life as she’d like those around her to believe. Add to that Zhang Hua’s questionable past, something that Fei Fei herself isn’t completely aware of, and there’s a mystery to unravel alongside the main plot of the affair.

Szczepanowska’s depiction of the affair between Fei Fei and Bai Yu is refreshing. This isn’t an excuse to show endless nudity and gratuitous sex scenes, instead it’s an opportunity to show how two people can up-end each other’s world by giving into impulses they know to be wrong. Fei Fei’s first meeting with Bai Yu is hardly a smooth one as he refuses to massage her because she’s a woman but as the film goes on, you wonder if Bai Yu may be more aware of his own nature than he lets on.

With stunning cinematography, ‘Touch’ is always captivating with the luxurious houses and gorgeous scenery keeping you occupied even if the characters aren’t doing much on screen. Szczepanowska makes sure that her story never lags and she expertly builds the tension, leading to a climax that seems inevitable but still manages to be surprising. She also fleshes out some wonderful moments between Fei Fei and Zhang Hua, that gives you a real insight into their marriage and makes you ask if two people can ever truly know one another?

There’s no doubt in my mind that this is a breath-taking showcase for Szczepanowska. Her performance, speaking in Chinese throughout, is nothing short of a tour-de-force and it’s jaw-dropping what she’s pulled off her. As a director she has a keen eye for drawing the tension out of scenes and she’s never afraid to increase the intensity when the scene calls for it. As a storyteller, she takes familiar tropes and subverts them, giving us something we haven’t seen before and eschewing the idea that it’s women who go crazy when an affair doesn’t work out.

‘Touch’ is an accomplished piece of film that deserves to be seen far and wide. It’s exciting, dramatic, tense and heartbreaking, and while it may seem unusual in the line-up for a horror festival, there’s plenty of psychological horror throughout. Szczepanowska is a remarkable talent and I truly cannot wait to see what she does next. After ‘Touch’, the world should be her oyster.