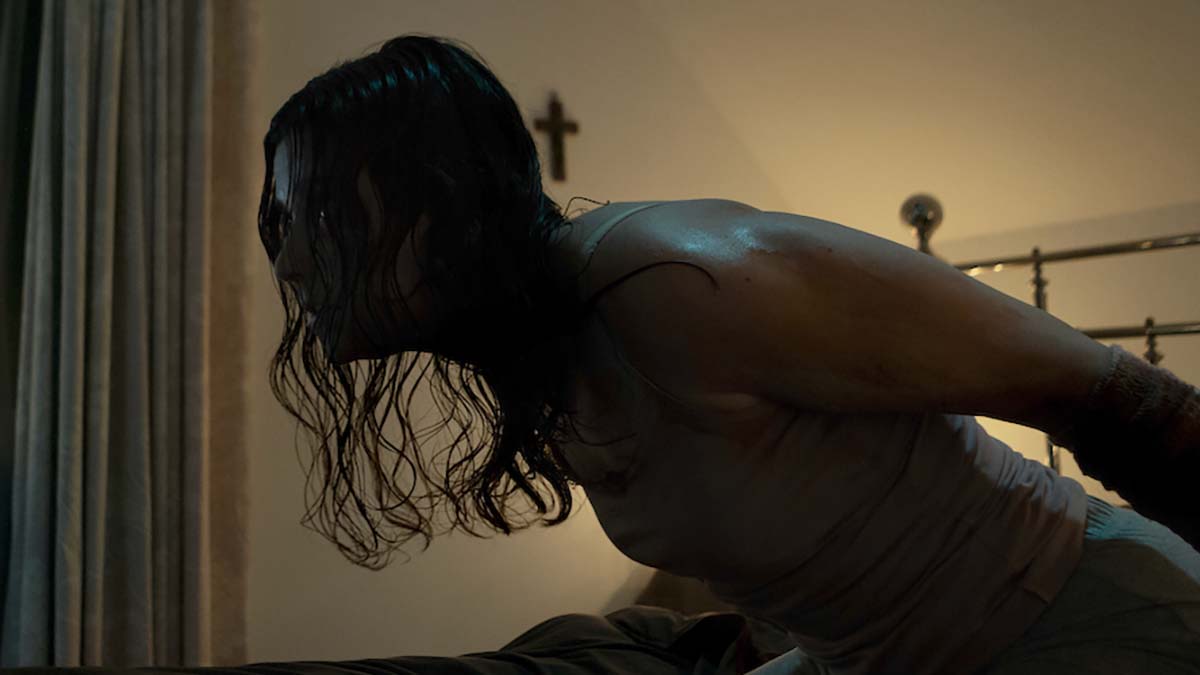 Medical student Lucy (Bethan Waller) moves in with her boyfriend Ben (Johnny Fleming) and is spooked out when she keeps seeing a man in a hat both inside and outside of the house. Suffering from sleep paralysis, Lucy becomes increasingly paranoid that the house is haunted but Ben won’t listen to her. In a desperate bid to find out what’s going on, and to save her own sanity, Lucy seeks out local priest Father Roberts (Kit Smith) for help. Is she going crazy or has a demonic entity possessed her?

‘The Last Rite’ is part of the ‘First Blood’ strand at Arrow Video FrightFest and the film has just received its World Premiere. I’ll admit that I went into this film a little weary having seen so many films about demonic possession over the years as I wondered what else there was to say on the subject. Writer/director Leroy Kincaide managed to catch me by surprise and with ‘The Last Rite’ he’s crafted a genuinely creepy slow-building horror that will engage you from the opening moments and hold you right until the end.

I’m pleased to say that Kincaide hasn’t gone for a run of the mill demonic possession story. With ‘The Last Rite’ he’s crafted a story about a woman who is recovering from grief and trying to move forward with her life, only to experience a set-back that makes her question her mental health and sanity. Kincaide excels in the moments where Lucy is traumatised by the events that are happening around her, expertly building atmosphere and keeping you on the edge of your seat.

Your sympathy for Lucy grows further as her boyfriend Ben is aggressive and dismissive every time she tries to open up to him about what she’s going through. Lucy’s descent into hell is a gradual one but that works in the film’s favour. It gives us plenty of time to get to know Lucy so that we care as her world starts to unravel. Kincaide’s story builds to an intense climax that has echoes of ‘The Exorcist’ but finds its own path to a conclusion that feels satisfying.

There’s a little bit of dodgy acting here and there. Thankfully it’s not enough to distract from Kincaide’s overall vision but it does threaten to pull you out of the story on a few occasions. It’s easy to overlook though when you have a performance as strong as Bethany Waller’s. As Lucy she effortlessly moves between terrified and terrifying. This is only her second acting credit but she more than drives the film and her performance will win over audiences.

‘The Last Rite’ may not cover completely original territory but it attempts something different, and I admire it for that. The film kept me gripped over its lengthy run-time and there are some truly harrowing moments that will keep you up at night. Kincaide shows real potential as both a writer and a director, and ‘The Last Rite’ should garner him plenty of attention. If a slow-burn horror with psychological elements is your bag, this is a film you need to add to your watch list.