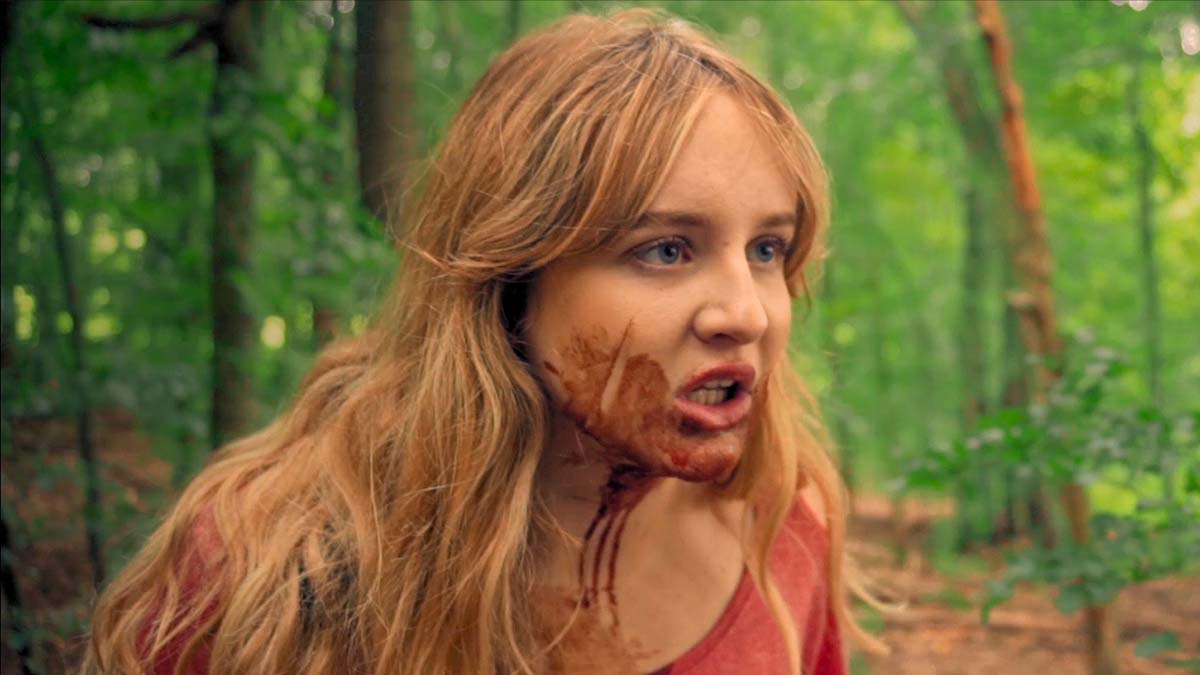 Maya (Charlotte Olivia) is a young woman who also happens to be a werewolf. Unable to properly get a handle on who she is, Maya takes her friend Luke (Jathis Sivanesan) to meet up with two werewolf hunters Connor (Stefan Chanyaem) and Everett (John Black), so she can find other werewolves in the woods and understand her own identity. While Luke is fearful that Maya is walking herself into a trap, Maya is desperate to find herself and control her urges.

‘Are We Monsters’ is the feature film debut of director Seb Cox and it’s part of this year’s ‘First Blood’ strand at Arrow Video FrightFest. Cox wrote the screenplay with John Black, who plays Everett in the movie, and the duo aim to tackle identity issues using werewolves as a metaphor. The film opens with Everett hunting werewolves in the woods with his father (Justin Hayward), who is killed by one. That fuels Everett and his brother Connor’s hatred of the creatures, and it helps the audience to mistrust their intentions once they meet up with Maya.

With a promising start, ‘Are We Monsters’ sadly doesn’t quite hold together as well as it should do. Cox and Black have interwoven the folklore of lycanthropy with the story of Maya, but it’s a little too heavy-handed. Maya’s story is really about finding her true identity and making peace with it. While it’s certainly a topic that’s very relevant in today’s society, I’m not convinced it really worked in this context. When Maya is human, she confuses Everett who changes during the course of the film from being against werewolves to thinking that perhaps they’ve been understood. His character goes on the biggest journey but the depth just isn’t in the script to fully realise the potential.

The way the werewolves look is very unusual. Horror fans are used to seeing them depicted as a hybrid of wolves and humans but in this film, Cox creates something altogether more terrifying. These werewolves have elongated necks and arms, and they reminded me a little bit of one of the many guises of Beetlejuice. Cox uses them effectively, never dominating the screen with their presence but understanding that less is more.

The four leads are a bit of a mixed bag. John Black and Charlotte Olivia stand out as the stronger actors, and to be honest their characters get the most material to work with. Jathis Sivanesan is a little too over-the-top and wooden at times to really win you over and Stefan Chanyaem never manages to break out of the stereotypical villain that his character is established to be early on.

‘Are We Monsters’ is a solid enough film and I can see what Cox and Black were trying to do, but for me it just didn’t quite work. The majority of the film takes place in the same woods, which makes it feel overly repetitive at times. Had the characters been more rounded, there may have been more to sink your teeth into. I commend the film-makers for trying to deliver a fresh take on the werewolf sub-genre and there is enough promise shown here to interest me in what they’re going to do next.