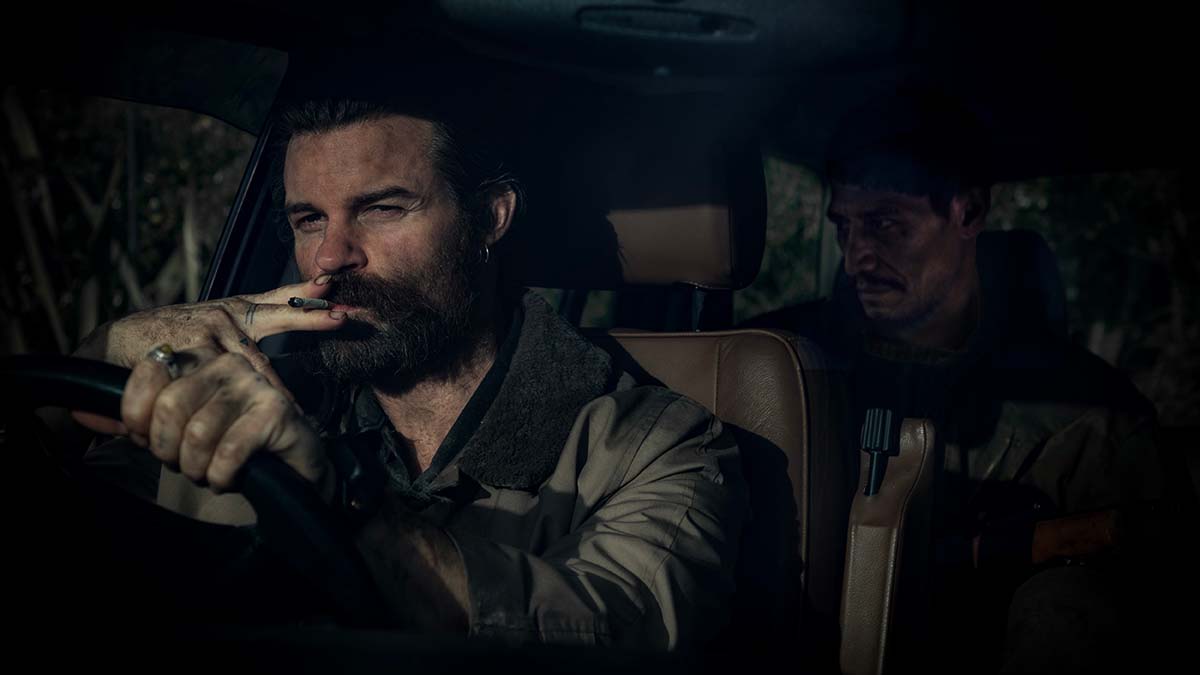 School teacher Hoaggie (Erik Thomson) takes his wife Jill (Miriama McDowell) and their two children into the New Zealand wilderness for a trip. As they settle down for a picnic, the family is interrupted by strangers Mandrake (Daniel Gillies) and Tubs (Matthias Luafutu) who steal their car keys and belongings. Hoping the men will leave, Hoaggie and Jill are horrified by a seemingly random act of violence that leads to them being taken hostage. It soon becomes clear that the encounter wasn’t a coincidence and that Hoaggie is hiding a secret from his past.

‘Coming Home in the Dark’ is based on Owen Marshall’s short story and it’s a tense, and violent, psychological thriller. The opening could be one of the most shocking that I’ve seen in a film for quite some time. It has a huge impact that will leave your jaw on the floor and you’ll be surprised just how nasty it is. That sets the tone for what’s to come as Hoaggie and his wife Jill have to battle their captors as their marriage is pushed to the limit, thanks to revelations Hoaggie was hoping would stay buried.

Director James Ashcroft uses ‘Coming Home in the Dark’ to comment on the child abuse scandals that have rocked New Zealand the past several years. Using Marshall’s story, he and co-writer Eli Kent slowly draw out the link between Mandrake, Tubs and Hoaggie, and it’s a really intense ride to get there. You can’t help but feel sorry for Jill who is essentially collateral damage thanks to her husband keeping secrets. Her realisation that the man she’s built a life with isn’t who she thought he was is one of the hardest hitting moments of the film.

Much of the tension though comes from Mandrake, impressively played by ‘The Originals’ and ‘The Vampire Diaries’ star Daniel Gillies. Devoid of any of the characteristics that won him fans in those shows, Gillies is cold, calculated and utterly ruthless. Even when he speaks a seemingly innocuous sentence, you get chills down your spine because he’s just so convincing. I had never considered him leading man material before but his performance here is absolutely superb. Erik Thomson is worthy of note too, peeling the layers of Hoaggie away as Mandrake pushes him closer to reveal the secret he’s been hiding. Thomson manages to keep the character sympathetic, even when the eventual horrifying reveal comes out.

‘Coming Home in the Dark’ is incredibly bleak, possibly the bleakest film I’ve seen since ‘The Road’, but I couldn’t take my eyes off it. Yes I’ve seen films like this before and the story while engaging isn’t wholly original but it’s so well-made (and tense) that you can’t look away from the screen. Perhaps the most interesting aspect is that you wind up feeling some degree of sympathy for Mandrake and Tubs, despite them being happy to stop at nothing to exact their revenge.