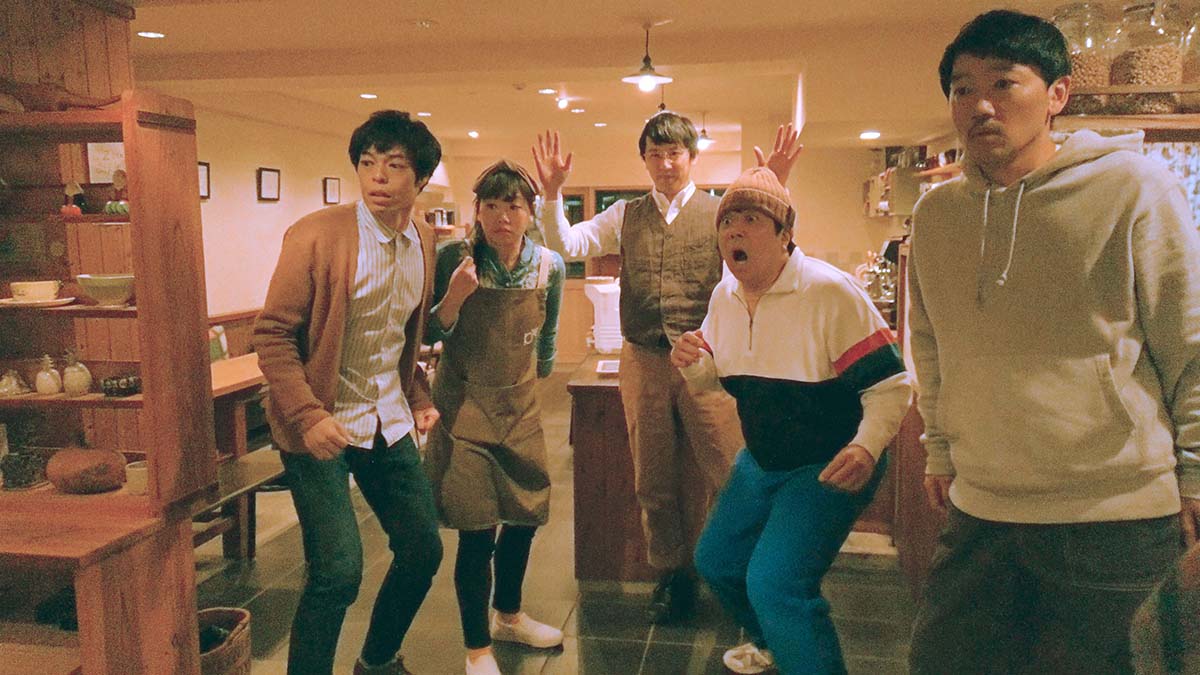 Café owner Kato (Kazunari Tosa) returns to his apartment and as he’s looking for his guitar pick, his future self appears on his monitor. Shocked by what he’s seeing, Kato is informed that his monitor is showing what will happen two minutes into the future and that is connected to his café’s TV with a two-minute delay. Instructed by his future self to return to the café and explain the situation to his past self, Kato draws the attention of his waitress Aya (Riko Fujitani). Soon they are joined by their friends as they play with the two screens, glimpsing into the future then acting on what they learn, which soon lands them in unexpected trouble.

‘Beyond The Infinite Two Minutes’ had its UK Premiere at Arrow Video FrightFest today following its huge success back in Japan. The film, presented as if it is one continuous take, is from director Junta Yamaguchi and writer Makoto Ueda, and it’s a mind-bending time travel comedy that is sure to impress. At only 70 minutes in length the film doesn’t outstay it’s welcome and it’s a very entertaining and unique premise. Shot on a smart phone, ‘Beyond The Infinite Two Minutes’ doesn’t get bogged down with explaining the science of the situation, although it does enough so that’ll you understand what’s going on.

Due to the nature of the plot, you see the same scene twice but from different perspectives – the past and the future – as Kato and his friends push their new discovery to its limits. Kato soon tires of doing what he’s told by his future self and wants to break out of the cycle but his friends completely ignore him. What starts off as harmless fun takes a more sinister turn with a sub-plot about dirty money that sees the characters in the crosshairs of some very unpleasant people. That situation also drags in Megumi (Aki Asakura), the girl from the barbershop next door who is the object of Kato’s affections.

Ueda’s screenplay is incredibly tight and doesn’t leave any time for you to get bored. It’s fast-paced and even though it feels repetitive at times, the characters are so infectious that you’re more than happy to just go along for the ride. When you think the plot has been stretched enough, Ueda adds new complications that the gang has to factor in as they continue to play with time. The direction from Yamaguchi is jaw-dropping and he really does put you into the situation unfolding on screen. You feel like you’re with Kato and his friends, going through the bizarre situation with them.

There isn’t a lot of time for character development but that isn’t really the point of the film. The characters are relatable enough and the chemistry of the actors means you forgive the lack of depth. Riko Fujitani in particular is very entertaining as Aya, the waitress who works for Kato and gets completely carried away by the prospect of seeing into the future. As things escalate, she frequently becomes the light relief.

‘Beyond The Infinite Two Minutes’ is unlike anything I’ve seen before. It is a bit of a headscratcher at times but it’s such a clever idea that’s incredibly well executed. The pace of the film is a little dizzying at times but that only serves to disorient you, the way Kato and his friends are disoriented by the situation. It’s a very tight film with plenty of innovation and I heartily recommend you give your time to it.