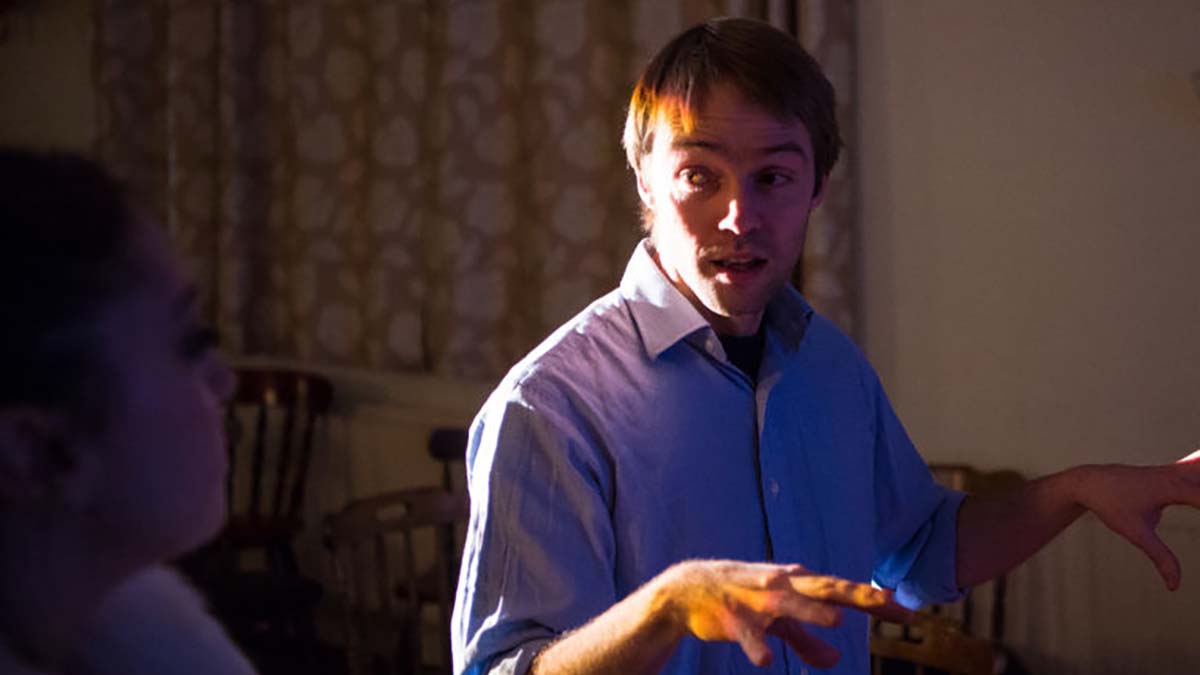 Following on from our interview with lead actor Russell Steinberg, David takes us deeper into the making of the soon-to-be cult classic. Stylish, a bit bonkers and unlike anything you’ve seen before, ‘Laguna Ave.’ is likely to be one film horror fans don’t forget in a hurry.

I caught up with David recently to talk about the challenges of making the film, discuss its premiere at FrightFest, and to find out what his favourite horror film of all-time is…

Your film ‘Laguna Ave’ is having its World Premiere at Arrow Video FrightFest. What is the film about?

We are so delighted to be playing FrightFest, it’s the best festival we could have ever wished to premiere at, and looking at the rest of the line-up, it’s safe to say we have found our people! Laguna Ave is about a disaffected slacker, Russell, who starts hanging out with a transhumanist revolutionary and finds himself getting drawn deeper and deeper into his new friend’s paranoid worldview. The film explores our relationship to technology through things like bodyhacking, the singularity … And on a purely emotional level, it’s basically about the way that certain men go a little off the rails when their girlfriend is out of town.

The story features plenty of twists and turns, and gets a bit crazy at times. What was it like bringing Paul Papadeas’ story to life?

Paul and I play in a band, Brezhnevs Medals, so we had already worked together, making quick and dirty rock music. In the band, Paul writes the words and I write the tunes; he comes up with the crazy shit at the heart of the song and I shape it into a structure that works. So with Laguna Ave, we took our existing dynamic and applied it to filmmaking instead. I thought Paul’s concept for the movie was hilarious, and we have very similar tastes, so right from the start we were on the same page: we wanted to use the freedom of the zero-budget approach to take risks, to write something that would never get made in Hollywood. And we entered into it with a band mentality, trusting in the fact that when everyone brings their own personality to the mix, you create a beast that is bigger than the sum of its parts. Laguna Ave took on a life of its own, I just tried to stay calm and help our little creature grow into what it wanted to be.

Your lead, Russell Steinberg, gives a fantastic performance and he really gets the audience on side. What was he like to direct?

Honestly, directing Russell was incredibly easy. He pitched his character perfectly, bringing this great mixture of humour and sincerity. So I didn’t have to push him at all, he just instinctively got it. And he was more than willing to go to all the extreme places that the script took him. I remember when we were shooting the molly enema scene, which was entirely improvised, I was just sitting behind the monitor quivering with delight, watching him embrace the insanity and follow it wherever it led. I can’t imagine anybody else playing that role.

What were the biggest challenges when making the film?

Literally everything about it! Our production budget was $15,000 so if something goes wrong you can’t just throw money at the problem. Everything was difficult. We were constantly dealing with angry neighbours, props breaking, termites eating parts of the set, last-minute location changes… it was high drama at all times. At one point there was a schedule cock-up, and we had to shoot 20 pages of script in a single day. That’s like five times the usual amount. But our philosophy was, you have to let that chaotic atmosphere bleed into the film, there’s no point fighting it. So yes, it was incredibly tough, from start to finish. But to the cast and crew’s credit, everyone stayed the course because we all cared so much about the movie.

What was the decision behind filming ‘Laguna Ave’ in black-and-white rather than colour?

When I read the script, I instinctively pictured it in black-and-white. The whole thing had a kind of ‘noir’ feel, it was so paranoid and seedy. LA is a city that’s full of bright sunlight and dark shadows, so (cinematographer) David Speck and I wanted to create a look that emphasised those contrasts. I also liked the fact that black-and-white shifts the world into an unreal, dreamlike space, which works well for a story where the characters have a shaky grip on reality. Of course, shooting black-and-white is also a brilliant way to make things look better on a limited budget… but I would never do that just for the sake of it. It just really matched the mood of the script.

What are you hoping that audiences take away from the film?

I would say the main take-away is probably, “Do not let your paranoid neighbour recruit you into his millenarian techno-cult.” But aside from that, I just hope they have fun.

What would you say is the one horror film that’s influenced you the most and why?

It’s not strictly a horror film, but I saw ‘Existenz’ by David Cronenberg when I was 18 and it has stuck with me ever since. I loved how grimy it was, with the diseased spinal ports, the gun made out of fishbones… and I especially loved the deeply eerie tone, the multiple levels of reality. The most terrifying thing in that movie is existence itself.

My plan is to take the lessons learned from ‘Laguna Ave’ and use them to make a feature in England, where I live. I want to see how far I can push the low-down dirty approach. Can I make something that’s even grottier, even trashier? England is a deeply messed up country at the moment, and I am developing a script that attempts to tap into that.

‘Laguna Ave.’ will have its World Premiere at Arrow Video FrightFest on Friday 27th August 2021 at 11.10pm on Discovery Screen One. For tickets and more information, please visit https://www.frightfest.co.uk/holdingfolder2/LagunaAve.html.