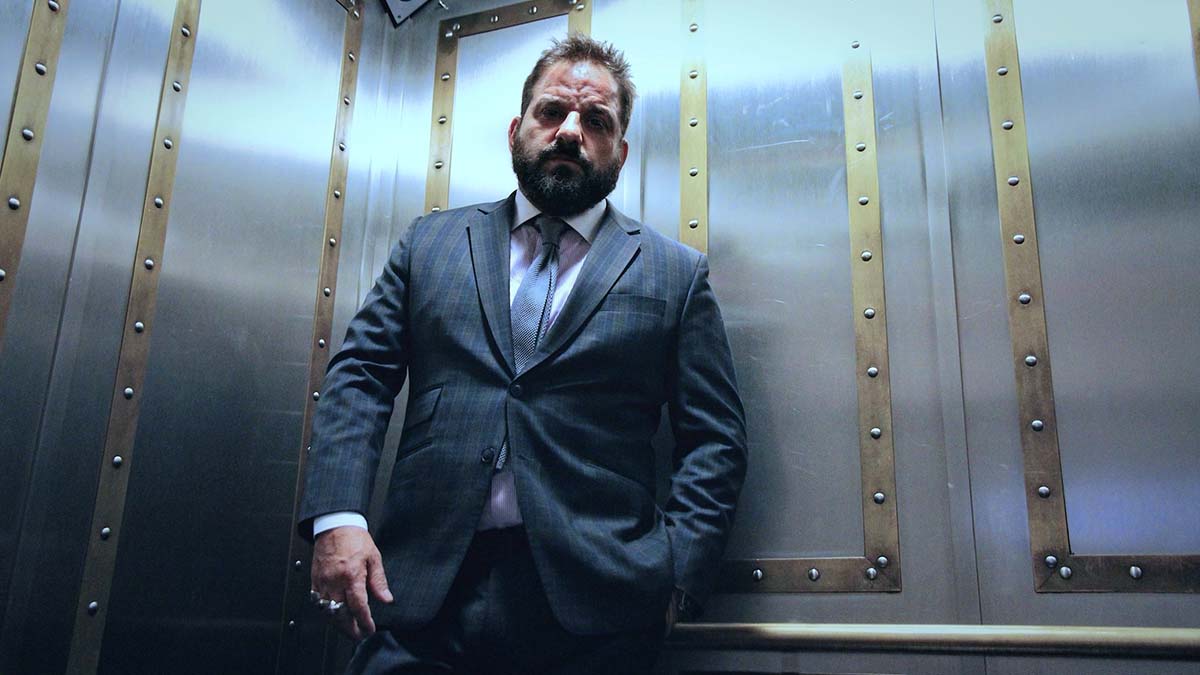 The black-and-white film is a mix of horror, sci-fi and comedy, and it’s sure to be one of the most talked-about films at this year’s festival. In the central role of Russell is actor Russell Steinberg, who gives a must-see performance and leads us through the wacky world depicted in the film.

I spoke with Russell recently to find out more about the film, discuss his chemistry with his co-stars and to talk about working with director Buchanan…

‘Laguna Ave.’ is coming to Arrow Video FrightFest this month. What’s the film all about?

It gets its name from the apartment complex where they live on Laguna Ave which is the actual building where the director David and the  writer/producer Paul met. It’s about a disaffected, out of work ex-musician turned editor with a prosthetic hand who becomes obsessed with his downstairs neighbor who’s trying to turn himself into a cyborg using found objects.

You play the character of Russell. What do we need to know about him?

It’s not based on me!

How did you get involved with the film?

I’ve know the producer Ali Barone for over 20 years. We met working at Lucky Strike in Soho circa 1995.  We’re besties. I was living in NY and just had a child with my girlfriend Sarah McSweeney when Ali and Paul sent me the script for Laguna and asked if I’d come out to LA and star in the film. I read the script, talked it over with the baby mama, then the three of us headed to LA. Sarah and Cecilia got a special thanks at the end of the film for being troopers while I shot 18-hour days sometimes.

There’s a fantastic chemistry with the cast and you have some great scenes with Stephanie Brait and James Markham Hall Jr. How did you bring that chemistry out on screen?

To be honest the energy on the film was so good. Everyone involved was there as a labor of love. So the vibes were good to start with. And I guess the rest was just listening and connecting for me. Stephanie is a pro and was a joy to work with. Jamie’s a physical giant and his character is also bigger than life so for me it was about keeping Russell grounded. Even when I enter his fantastic world, I keep a foot in mine and we meet somewhere in the middle.

David Buchanan directed the film. What was he like to work with and what did you learn from him?

David and I got along great right from the first phone call. I love his British sensibility and timing. He help me to keep it grounded and not slip into trying to be funny at times. The movie definitely has some highly comical moments but they came out from playing it real and not going for the humor.

What was the most challenging aspect of playing Russell?

I don’t want to spoil the film, but it’s a “costume thing.”

What horror movie has had the biggest impact on you and why?

‘Salem’s Lot’ scared the crap out of me when I was a kid. I think they showed it on regular television or maybe it was cable. All I know is the scratching on the window scene kept me awake for months.

I have a documentary about my alter ego Johnny Fayva in development called ‘The Last Schmaltz’ and I movie I wrote called ‘I Love You Mom’ which is like ‘Harold and Maude’ meets ‘Throw Momma From The Train’.

‘Laguna Ave.’ will have its World Premiere at Arrow Video FrightFest on Friday 27th August 2021 at 11.10pm on Discovery Screen One. For tickets and more information, please visit https://www.frightfest.co.uk/holdingfolder2/LagunaAve.html.