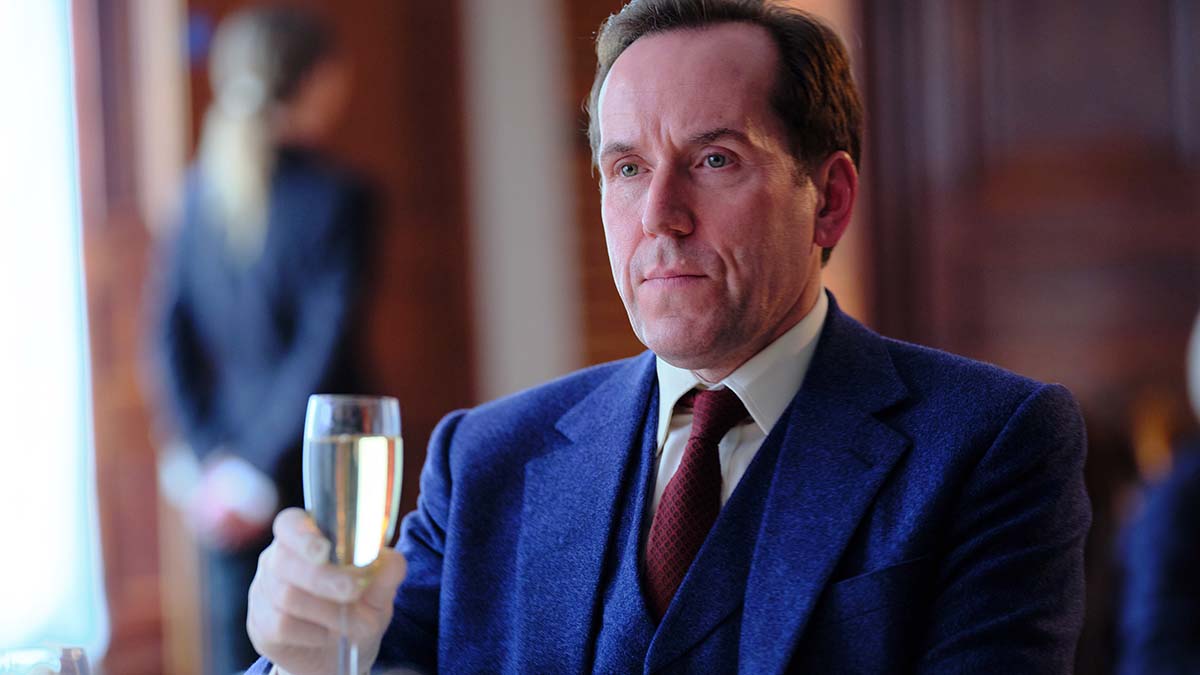 The first series of ‘Professor T‘ came to a close as Jasper (Ben Miller) confronted his past while trying to solve the case of a billionaire targeted by a mystery shooter.

If you want to avoid spoilers, please stop reading this article now.

The episode opened with billionaire businessman James Samson (Robert Cavanah) about to give a speech when someone on a motorbike pulled up and fired a shot at him through a window. James was unharmed and his wife Natasha (Charlotte Timmers) ran over to comfort him.

Lisa (Emma Naomi) was surprised to see Andy (Paul Rabbit) at the crime scene and she got him up-to-speed. She told him he was looking better as they entered a lift and Lisa told Andy the woman with James was his wife not his daughter. Lisa and Andy were greeted tersely by James, who was keen to get on with his day. James said that the shooter was a bad shot but Lisa suggested the shooter was there to scare him rather than kill him. Henry (Matthieu Sys) and Freddie (Calvin Demba) entered the room and informed their father that his interview had been cancelled.

As Lisa and Andy went back downstairs Dan (Barney White) arrived at the crime scene. Lisa asked him how his evening was the night before but Dan brushed her off saying it was a bad idea to mix business and pleasure.

Jasper was shown having a shave and getting ready for the day. He arrived at work to find the auditorium empty and when he went to his office, Ingrid (Sarah Woodward) was there with a donut to mark his birthday. She explained that she’d cancelled his 9am lecture.

Lisa, Andy, Dan and Christina (Juliet Aubrey) chatted about the case. Dan remained cold towards Lisa as the team threw around theories. Andy asked what Jasper thought of the case so Lisa went to see him on the roof. Jasper said his father was friends with James and he ruled out one lead who he confirmed had been dead for years. Taking out his phone, Jasper showed Lisa a video of James saying he’s going to give away most of his fortune. Jasper suggested that a fellow academic could be targeting him out of jealousy.

Jasper, Lisa and Dan arrived at James’ house to find Natasha waiting. She asked them to talk sense into her husband and they went to speak with him in the garden, where he was shooting. Jasper pointed out that Freddie was James’ adopted son and Lisa questioned Freddie about his whereabouts the day before. James became agitated and told Dan and Lisa that they should be looking for a right-wing crack pot.

As they were leaving the house, Natasha chased after them to reveal that James had received an envelope with a bullet in two days before the shooting. When Lisa asked if she still had it, Natasha told them James had thrown it away. As they drove away, James was shown telling someone there was nothing to worry about.

Back at the station, Jasper told the team that they needed to start with the family. Lisa showed Christina the video of James and it was decided they should speak to James’ children. Once Lisa, Andy and Dan left the room, Christina asked Jasper if he was alright and offered to talk to him if he needed someone to talk to.

Lisa and Jasper visited Henry to ask about his whereabouts on the day James was shot at. They confirmed there was tension between Henry and his father stemming from Natasha, who was Henry’s girlfriend before she married James. When asked about James’ plan to give away his money, Henry said there was only one gold digger in the family and pointed the finger at Natasha and suggested they look into Freddie. Lisa called Dan and he was having lunch with Dina (Barbara Verbergt) and Jasper told Lisa he had a lunch date too, which turned out to be with Adelaide (Frances De La Tour).

Freddie was brought in by Andy and Lisa, and questioned about his late father Aaron Bell and his adopted father James. They asked why Freddie would work for someone who may have had a hand in his biological father’s suicide. Freddie denied that James had anything to do with it and blamed alcoholism for his dad’s death.

At lunch Adelaide told Jasper his birthday was a difficult day for her too and we saw a flashback to Jasper’s father attacking Adelaide.

In the interview room, Freddie said Aaron was abusive when he drank and that James had protected him. The conversation turned to James’ decision to give his money away and Freddie said he wasn’t interested in the money.

James sat in his office when a car pulled up outside. Someone entered his office and he told them they were late.

Dan’s relationship with Dina was going well as the two were shown in bed together. They were interrupted by a call from Lisa and Dan told Dina he had to go.

At the Samson home, Henry was fuming at Andy and Lisa while Natasha was in tears. In James’ office the forensics team were cataloguing a crime scene. There was blood all over the walls but no sign of James. Natasha said she’d tried to call Freddie and revealed she’d seen him arriving at the house as she’d been leaving. Andy suggested they locate him.

Lisa and Dan went to Freddie’s home and had an awkward conversation. Dan said he still didn’t forgive Lisa for standing him up but that he might forgive her if his relationship with Dina continues. At that point, Freddie opened the door and claimed James was fine when he left the house. He showed them a text from James on his phone, sent after he’d left, but before he could pass the phone over, he dropped it suggesting he has issues with his hands.

The next day, Lisa and Dan gave Christina an update on the case. They confirmed that Natasha, Freddie and Henry all had alibis for their whereabouts. Christina suggested they turn their attention to activists but wanted to check with Jasper first. Together, the team looked at photos from the crime scene and Jasper had one of his hallucinations that he had blood on his hands before being transported to his James’ office where he smeared blood over everything. Once he came back to reality, he asked to see the results of the blood tests and Lisa confirmed it was definitely James’ blood.

Lisa went to speak with Natasha again and asked her if James had spoken to her before he made his announcement about giving away his money. Natasha said he had spoken to her and she’d insisted on signing a pre-nuptial agreement that stated she would get none of his fortune. Natasha then pointed the finger at Henry who was set to inherit his father’s fortune along with Freddie.

Jasper stared at a wedding cake and had a memory of Christina stood in a wedding dress, seemingly stood up by someone. Jasper and Christina had a heart-to-heart about why he left her and she told him she’d forgiven him. Dan interrupted them with the blood test results and Jasper told them the crime scene had been staged. When Dan asked how Jasper knew, Jasper said a hand print gave it away and that the blood used in the crime scene had been collected prior. Andy walked in and delivered the shocking news that James’ body had been discovered.

Lisa received the news and rushed back to the station to discuss the murder. They ruled out Natasha but Lisa said she didn’t believe that Henry or Freddie were happy about their father’s pledge to give away his money. Lisa’s phone rang and she was told that James was shot after he’d had a heart attack.

Henry and Freddie were brought back in for questioning and Andy asked Jasper to sit in on the interviews. During the interview with Henry, he was told about Natasha’s pre-nup and that took him by surprise. The questioning then turned to which one of James’ sons had helped him stage the crime scene. Both looked guilty but it was Freddie who claimed responsibility. He explained that he’d told James not to go through with his plan but that James believed it was the way to bring Henry back into the family.

James had planned to go into hiding for a week before returning and claiming he’d escaped his abductors. Freddie admitted that he smuggled his father away in the boot of his car and they’d pre-planned the text message to give Freddie an alibi. When Freddie stopped the car in the woods, he opened the boot and found James dead. He said he panicked and didn’t feel he could go to the police because no one would have believed him. Freddie then ditched James’ body in the woods and shot him to make it look like he had been abducted. After that, he set James on fire as he realised the body didn’t have enough blood loss to account for the crime scene. He failed to burn the body and left it in the woods.

Lisa revealed that the shooter had been arranged by James and the bike used had belonged to Freddie. Jasper suddenly left the station saying he needed to return home. We saw happier memories of him as a boy with his mother and father before the flashback continued on his father beating his mother. Then came the shocking revelation that Jasper had killed his own father with a shotgun.

Read our recap of episode 1 ‘Anatomy of a Memory’

Read our recap of episode 2 ‘A Fish Called Walter’

‘Professor T’ is available now to watch on ITV Hub.