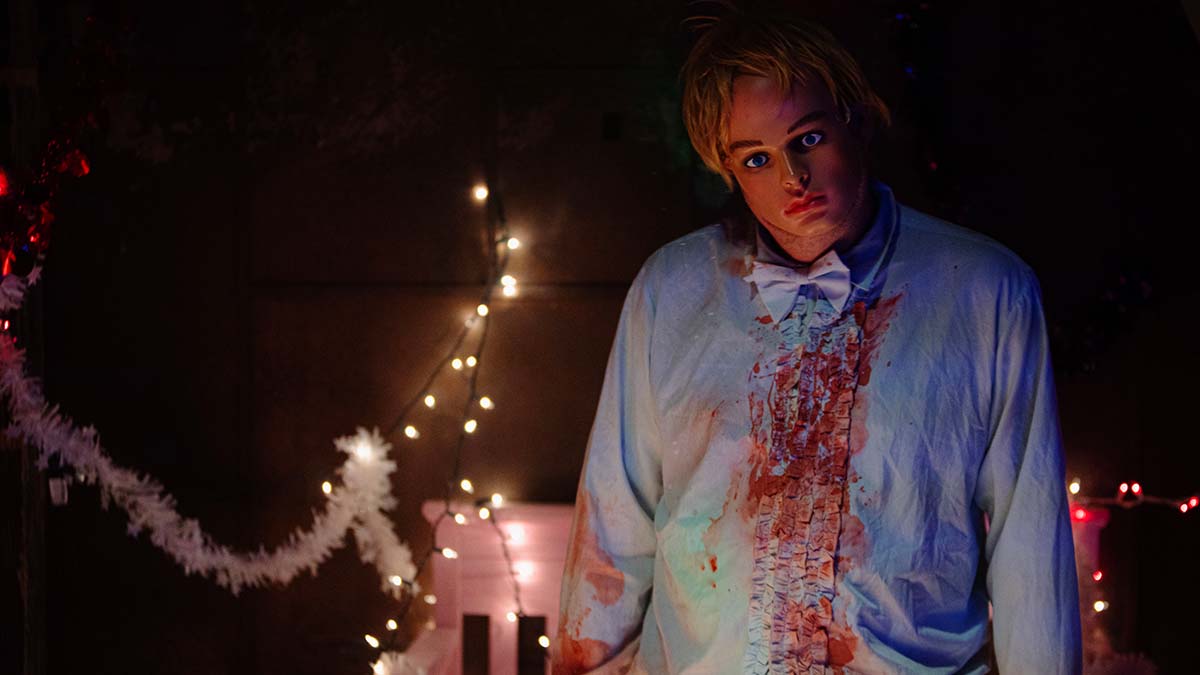 A year later, he’s back with the sequel ‘Pretty Boy’, which will be having its International Premiere. The film picks up where ‘Blind’ left off and it will give fans a deeper understanding of the creepy titular killer.

I spoke to Marcel recently to find out what we can expect from the film, discuss the darker tone it takes, and to talk about the film’s inventive death scenes…

‘Pretty Boy’ is receiving its International Premiere at Arrow Video FrightFest this month. What can horror fans expect from the movie?

Yes, we’re very happy and proud to be a part of one of the biggest genre festivals in the world.  The whole team behind it is amazing. What can they expect… well ‘Pretty Boy’ is definitely different than ‘Blind’! It’s a funny 80s styled horror slasher with a lot of balloons, pink everywhere and BLOOD!

Tonally ‘Pretty Boy’ is quite different to ‘Blind’ and it’s much darker. Why did you decide to change things up for this film?

Yes ‘Pretty Boy’ is different than ‘Blind’, but that was the our plan from the beginning.  ‘Blind’ was a slow burn 70s style Giallo Horror. We knew if we got a chance to continue the story of Pretty Boy and Faye we would create a classic style 80s Slasher, the kind of slasher that we love, but we would do it our way and make it a bit darker. If we get a chance to continue making these, we will do a 90s Horror inspired one and also a 2000s French style dark and dirty one.

The first half of ‘Pretty Boy’, in particular, pays homage to the classic stalk and slash horrors of the 70s and 80s. How do you come up with those inventive death scenes and how difficult are they to pull off?

Joe Knetter (Writer) and I had so much fun with it. We already talked about ideas and kills for the sequel on the set of ‘Blind’ hoping we would be able to go in the direction we went in.  Many were homages to some of our favorite slasher kills.We were lucky that our actors loved shooting the death scenes so much, it really was a lot of fun and our special fx man Joe Castro did an amazing job! They are Bloody, gory and the most important part of it- we never used CGI effects for any of the kills, it’s all practical!

On a side note: I finally got the chance to realize one of my favorite kills (which I had in my mind for years… Well that sounds weird right?) I can’t say which one it is as it’s a spoiler, but it freaking hurts just watching it!

Jed Rowen who plays Pretty Boy has to communicate a lot using just his body language as his face is obscured. What was he like to work with and what was your experience like directing him?

Jed is amazing and great to work with!  He really brought Pretty Boy to life! It’s not just a guy in a mask, he speaks without talking and he walks and moves without seeing lol. It was really hard for him to see through the mask but he did an amazing job, especially in ‘Pretty Boy’, he had way more work to do in the sequel than in ‘Blind’, and definitely more people to kill! He gave the character so much life and heart, which is not easy, specially for someone who just killed more than 10 people in one night!  There are moments that you forget he’s in a mask.  You somehow see the emotion on his face just based on how he moves.  He really did an amazing job.

Sarah French is back in this film reprising the role of Faye. You put her through even more hell this time around and it must have been demanding on her. How did you help get her through the shoot and make her comfortable?

The first day on set with Sarah was very intense and emotional, for all of us. Sarah is an actress who puts a lot of heart and emotion in her roles and I know that her character in ‘Blind’ and ‘Pretty Boy’ was something very special for her.   When she arrived on set she started crying. I know that sounds dramatic, but we all had a tear in our eyes that day. ‘Blind’ was a small movie but it was something special for US and that’s what is important!

Directing Sarah French is always an honor and its such a pleasure to work with her and see her grow as actress and as a human! But it wasn’t just her talent or my direction, it was also the wonderful script from Joe Knetter that helped her to get into the character… Again!  We are all great friends so we trust each other.  It makes working together so much easier.

Where did the inspiration for the Pretty Boy costume come from?

My inspiration for Pretty Boy’s look was “the perfect face”! Blond hair, blue eyes, a clean look, Everything that the character wanted to be- like Barbie and Ken! We told Ken Hall (‘The Strangers’) what we wanted and he created that creepy version of a Ken doll!

Without giving too much away, it feels like there could be more story to tell with some of these characters. Is that something you’ve given thought to?

Well, yes! I can’t say to much about our plans, but yes we have some great ideas to continue the storyline of some of the characters from ‘Pretty Boy’.

We’re in early preproduction for a project that I’m really excited about it! Sadly I can’t say much about it but it will be very dark and brutal!  We have a few projects in development so expect to see much more from us in the coming years.

‘Pretty Boy’ will have its International Premiere at Arrow Video FrightFest 2021 on Friday 27th August at 10.50am on Discovery Screen One. For more details and tickets, please visit https://www.frightfest.co.uk/holdingfolder2/PrettyBoy.html.