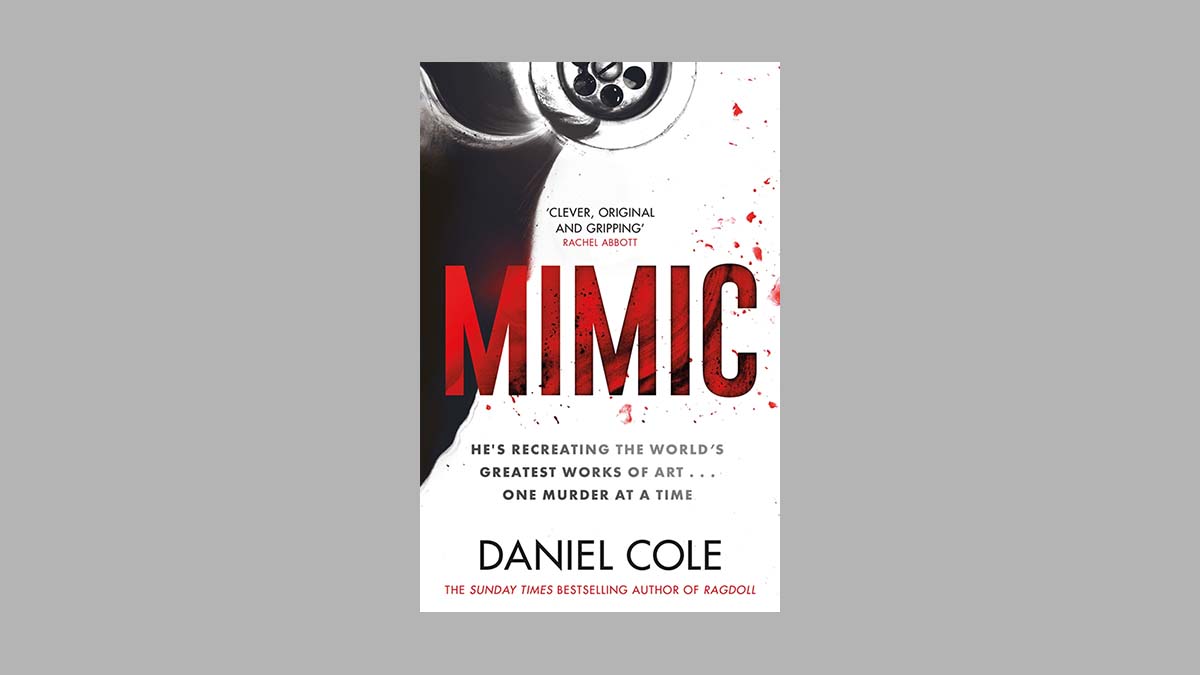 In 1989 DS Benjamin Chambers and DC Adam Winters trail a serial killer in London who uses his victims to recreate the world’s greatest works of arts. Working outside of the lines, the partners try to uncover the identity of the killer but once Chambers almost loses his life, the case goes cold. Seven years later in 1996, DS Marshall picks up the case and convinces Chambers and Winters to help her finally catch the killer and put him away for good. The reopening of the case causes the killer to come out of hiding and start killing once again.

‘Mimic’ is the new book by Daniel Cole, the author of the best-selling ‘Ragdoll’ trilogy, and it introduces readers to a new cast of characters and a very chilling serial killer. Spanning over two years from different decades, ‘Mimic’ is a gripping adrenaline fuelled read that is near impossible to put down once you start reading it (I started and finished the book within a 24-hour period). While Cole is very good at the more chilling elements of story, particularly the gruesome way the serial killer poses his victims as statues, he also proves to be adept at humour adding plenty of lighter moments to balance out the overall dark tone of the story.

I really liked the way that Cole split the story between 1989 and 1996. The first portion, which takes place in 1989, establishes the relationship between Chambers and Winters, and as well as setting up the serial killer Cole gives us a very good understanding of the two central characters. They are a little bit chalk and cheese, but as any good crime thriller fan knows, that usually makes for a winning combination. When the story moves seven years forward, you’re very invested in both Chambers and Winters, and the addition of Marshall works very well.

‘Mimic’ isn’t a typical whodunit either. While the first part of the book does keep you guessing who the killer is, the perpetrator is clear once you move to 1996. The story then transforms into three police officers working together to ensure justice takes place and the killer is placed behind bars. Of course, that’s no easy thing to achieve and the trio has to overcome plenty of hurdles along the way. Cole gets the pacing exactly right, never allowing the story to lag but also never over-stuffing it with set-pieces. He builds things very nicely, and he gives the characters time to breathe as they try to put the pieces of their investigation together.

The way Cole weaves in the classical references to the various statues that the killer mimics works well too. The book feature illustrations throughout but Cole’s descriptions conjure up horrific images that will definitely stay with you. It’s a very clever and very chilling concept.

I thoroughly enjoyed ‘Mimic’. It’s a well-written crime thriller that’s very hard to put down. I constantly wanted to know what happened next and the short chapters made it a fairly quick read. Cole writes with a very easy style that draws you in and keeps you hooked, and he knows how to create characters that you’ll root for. I would be very happy to revisit any of the three central characters again if Cole were to write a sequel in the future.

Advertisement. Scroll to continue reading.
In this article:Daniel Cole, Mimic