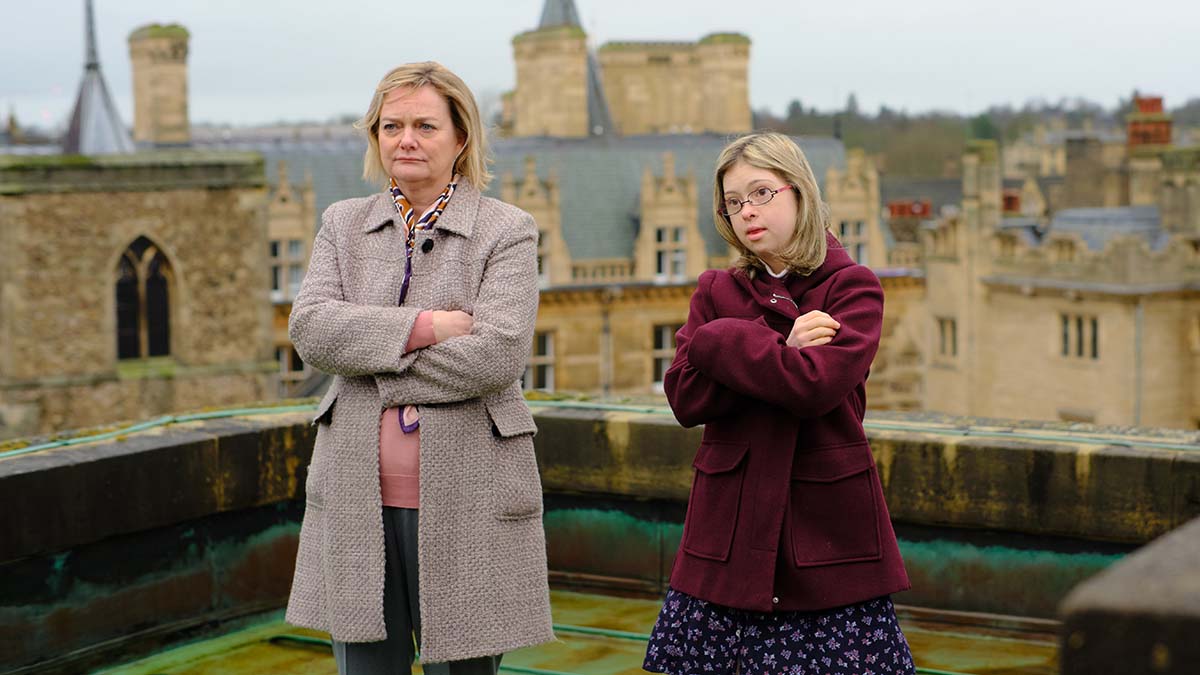 Jasper (Professor T) tried to help a vulnerable girl solve the murder of her mother on the latest episode of ‘Professor T’.

This week’s episode opened with Jasper having a shave but being distracted by a giant bubble. When it popped in his hand, he returned to shaving before making his way to work. Ingrid (Sarah Woodward) welcomed Jasper in a sarcastic way and let him know that Sophie Wallace (Kathleen Humberstone) and her grandmother (Terry Diab) were waiting to see him.

Once inside his office, the grandmother explained that her daughter Beverley was murdered but that Sophie was adamant that the man found guilty, Kane Carty (Andrew Glover), wasn’t the murderer. The grandmother explained that the police won’t listen to what Sophie has to say and when Jasper asked Sophie if she knew who the killer was, the grandmother said that if she didn’t she wasn’t telling anyone. Jasper then imagined another bubble before seeing the room full of bubbles.

Jasper went to see Christina (Juliet Aubrey) to inform her of the conversation he had with Sophie. Lisa (Emma Naomi) raised objections that the girl wasn’t reliable due to her Down’s Syndrome but Jasper dismissed her. Lisa and Dan (Barney White) interview Kane again, who revealed that he was doing drugs when he thought he had seen someone in the woods. Kane said he hadn’t realised that Beverley was dead when he robbed her body and pawned her belongings.

Lisa and Dan updated Christina and Jasper, but Jasper wasn’t giving up on his theory. Jasper and Lisa argued about the effects of heroin, which is what Kane had been smoking, and Christina suggested they speak to Sophie again. Jasper said that Sophie was autistic alongside her Down’s Syndrome, but he felt if he asked the right question at the right time he may get an answer.

Lisa stormed out of the office and Dan followed her. Dan asked why she hadn’t replied to his message and Lisa cut him off. Christina was watching the exchange.

At home Lisa played a game with her father Herman (Ben Onwukwe) but he thought he was playing with his wife, suggesting that he was suffering from dementia.

Lisa and Dan spoke to Sophie and her grandmother the next day. Dan warned Sophie that if she withheld evidence she could get into trouble. When Lisa tried to question her, Sophie insisted on speaking only with Jasper.

Lisa went through the case with Christina and Jasper, and Jasper was disgusted by the way Lisa was eating her food as she spoke. Christina asked Lisa to question Beverley’s sister and husband. Jasper meanwhile imagine he was sharing a romantic meal with Christina before a sneeze brought him back to reality.

Dan and Lisa visited Sophie’s father Andrew (James Daffern) and went over his version of events again. They pushed him to tell them if Beverley had any enemies but Andrew said looking after Sophie was a full-time job so Beverley hadn’t had time for friends. As they left the house, they drove via the woods to speak to Beverley’s sister Veronica (Trine Thielen) where Jasper asked about their plans to put Sophie into care. Veronica said that Sophie was getting harder to deal with and when she started getting emotional, Jasper imagined Veronica admitting that she hated her sister. He shared his theory with Lisa and Dan after they left.

Andrew made a cup of tea for Sophie, which he gave to her while she was watching television and at the same time we saw Herman drop a cup and smash it, leaving Lisa to clean it up. Lisa’s phone then flashed with a message from Dan asking if she wanted to see a movie.

The next day Dan revealed to Lisa that he’d volunteered them to stake out Veronica’s house. They started talking about their relationship but Lisa redirected the conversation to sharing a sandwich. Lisa agreed to go on a proper date with Dan.

Back at the office Dan showed Christina and Lisa a letter detailing how much it would cost to put Sophie into care. That sent them back to Andrew to ask further questions. Andrew admitted that he didn’t want to send Sophie away and that had caused an argument with Beverley.

Jasper spoke with Sophie about how she would feel about being sent away, while he imagined tea pots on the wall playing a tune. Lisa and Dan continued to question Andrew but he cut them short saying he needed to leave for work.

Dan and Lisa continued watching Veronica’s movements and Lisa asked Dan on a proper date for a meal. Lisa then noticed Veronica was meeting with someone and she took pictures. Bringing her in for questioning, Lisa and Dan showed Veronica the photos of her kissing Andrew. Veronica admitted they’d been having an affair for a year but Beverley didn’t know. She painted a picture that Beverley was very cruel and asked Lisa and Dan to leave Andrew out of the case. Lisa accused Veronica of murder, which she denied, and Veronica said that she’d spoken to Sophie on the phone the night Beverley died. Lisa also asked if Veronica’s husband knew about their affair.

Lisa and Dan brought Christina and Jasper up to speed. As they ran through suspects, Lisa threw Sophie into the mix and suggested that Sophie may have accidentally killed her mother. Jasper refused to let the team speak to Sophie again believing it would jeopardise his chance to find out what she knew. When Christina and Jasper went to confer, Lisa confirmed her date with Dan.

We saw Sophie arriving home and getting something to eat, when she heard someone in the house.

Lisa and Dan spoke to Veronica’s husband who told them he’d thrown her out of the house following the revelation of the affair. Lisa received a call and returned to Sophie’s home, where Andrew was in a panic because Sophie had gone missing. Dan and Lisa questioned him about the affair, and Andrew revealed he had been belittled by Beverley for years and that their marriage had been over for a long time. Lisa told Dan she thought Sophie had run away but Dan suspected Andrew of being involved.

Lisa called Christina and asked if Jasper had taken Sophie. Christina wouldn’t give her the information but assured her that Sophie was safe. Lisa shared that news with Andrew who was furious that his daughter had been taken without his consent.

Jasper returned to his office to find The Dean (Douglas Reith) waiting for him to ask about where Sophie was. Sophie was revealed to be with Adelaide (Frances De La Tour) and they were talking about a painting of Jasper that Adelaide was working on.

Jasper spoke briefly with Sophie’s grandmother about her support of putting Sophie in assisted living, and she said that she had some money she could have contributed. Jasper returned to see Sophie, who was on the roof with Ingrid. He asked Sophie why her grandmother had been asleep on the night her mother was murdered, and Sophie admitted to drugging her so she didn’t have to watch a show she didn’t want to.

Lisa lost her temper with Christina about Jasper’s actions and moments later Jasper arrived at the station with Sophie. Jasper asked Sophie if Andrew had killed Beverley and she confirmed that he had before giving Jasper a hug, and the pair of them saw bubbles.

The police located the murder weapon and brought Andrew in for questioning.  Andrew recounted what happened on the night he murdered Beverley. He explained that he hit a branch with his car and that the incident had caused Beverley to goad him. Andrew admitted that he snapped and hit her in the head with a hammer. He kept going until he knocked her down and killed her. Andrew tried to make it look like Beverley had been robbed but was interrupted by Kane. Sophie saw Andrew disposing of the murder weapon.

Once they finished with Andrew, Christina asked Lisa for a word. Lisa said she owed Christina an apology and revealed that she had a lot on her mind. Christina suggested a transfer but Lisa said that wouldn’t be necessary.

Dan waited in the restaurant for his date with Lisa and a woman turned up in her place. The woman said she was a friend of Lisa’s and that Lisa had decided not to mix business with pleasure. Dan was fuming and the woman introduced herself as Dina Rush (Barbara Verbergt). As he excused himself from the table, we saw Lisa at home with her father, and Dan took his frustration out in the toilets. He then returned to the table and decided to enjoy his date with Dina.

Read our recap of episode 1 ‘Anatomy of a Memory’

Read our recap of episode 2 ‘A Fish Called Walter’

Read our preview of episode 6 ‘The Dutiful Child’