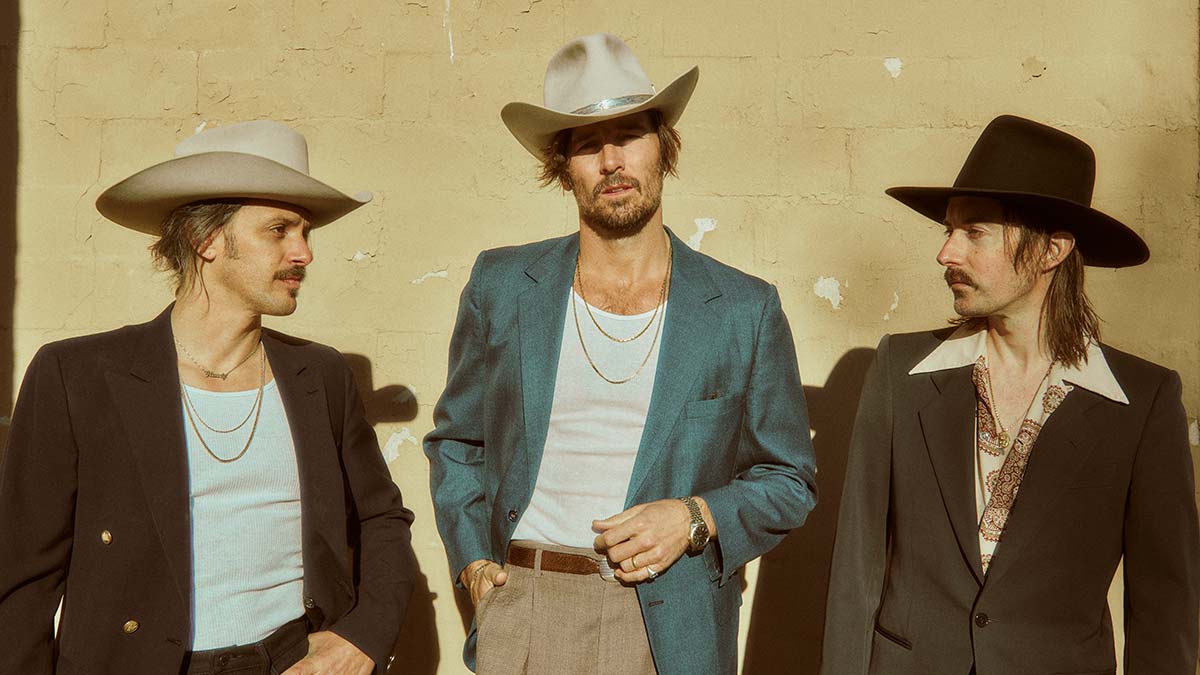 Midland – Mark Wystrach, Cameron Duddy and Jess Carson – are due in the UK in September for their thrice delayed tour.

Fans can not only look forward to seeing the trio live once again but they can expect to hear songs from the trio’s recently released collection ‘The Last Resort‘, a pre-cursor to their upcoming third studio album.

I spoke with the band recently to talk about ‘The Last Resort’, discuss their impending return to the UK and to find out about their musical evolution…

It’s nice to see the three of you. Mark and I spoke last year but it’s been a while since all of us have been together. How are you feeling about finally getting to the UK for this tour?

Jess: It’s incredible to be able to go travel over to a place, that you would travel to otherwise, and be able to play music there. It’s incredible. We’ve had so much fun going over there and just being tourists (laughs) at the same time as getting to do the shows and seeing people come out and sing along with the songs. You see people wearing cowboy hats and it’s cool, we love coming over there.

You guys are usually relentless touring. Has it been strange to have to completely stop for the past 18 months?

Cam: Yes. It was a painful relief. We would have kept going and hammering the road, like we had been for the previous two years, and we had a lot to look forward to through the summer of 2020. Some pretty major opportunities and what looked like an accelerated growth pattern for us as a band, but the silver lining really was that we got to come off the road and reassess what we wanted to do with the band. You don’t get that opportunity often unless somebody forces you to. We were able to put out ‘The Sonic Ranch’. Had we not been stationary, we never would have had the time or the inclination to put together a documentary telling our story and the genesis of Midland. I really do think that ‘The Last Resort’ would have sounded a lot different, and probably would have been named something different, but because we were sitting still, we were able to get back to the root of the lifeblood of this band, which is telling stories through song and exploring different modes and motifs musically through the writing process. I guarantee we would have been writing album three on the road had we not been forced to go home. Whatever your mental state is typically informs the kind of music that you’re writing, so I don’t know if it would have been better or worse but I do know that ‘The Last Resort’ would sound a lot different had we not been at home. We’re all really proud of the music that we’ve evolved into and been able to put out.

‘The Last Resort’ is definitely an evolution. It’s unmistakably Midland but it’s very different from what we’ve heard before with more of a Laurel Canyon/Eagles vibe to it. Did those influences come to the surface more because you had time to really put these songs together?

Mark: I think it’s difficult for us to pinpoint a narrative for that evolution. I don’t think it’s intentional or conscious. I think those types of things happen as a result of the work that we’re doing. When you were playing music all the time, when you’re writing all the time and when you’re living all the time, you catch yourself evolving. You catch yourself growing, you catch yourself maturing, and you also catch yourself in different phases. Jess, Cam and I are are music fans as well. We are listening to different things all the time, we are going through phases just ike our fans are and like anybody else is. It’s also one of those things where if you’re around somebody all the time, you don’t necessarily notice it change. If you don’t see a friend for six months, you notice they’ve changed their haircut and maybe they’ve got a couple more wrinkles under their eyes, it’s kind of the same thing with us. We don’t really notice those things until we go back to listen to the recordings when we’re doing the mixing. That’s when we recognise the evolution.

The fans are really keen to know if ‘The Last Resort’ is a standalone project or if it will eventually be rolled into a longer album?

Jess: ‘The Last Resort’ will be a full-length album. This is what we did with the very first music that we released. We released five songs and that became the full ‘On The Rocks’ album. It’s the same philosophy with it. I think the model’s changing for everybody. It used to be people didn’t really release music before the full album, it was just a lot of build up and then here came 15 songs. Now it’s a lot of teasing new music and releasing stuff. We just chose to release this block of songs, which will be part of the full length album.

When you guys are over here next month, will we hear any of the other new songs that haven’t been released yet?

Cam: I’m pretty sure we didn’t get a real chance to tour ‘Let It Roll, over there, our second album. Musically we’re always trying to make the show interesting so you’ll never hear the songs in the same way. We can’t possibly play this music the same way that we recorded it and we try.

Mark: I can’t remember it!

Cam: I mean I can’t remember it. There’s always covers. Because we don’t play to tracks there’s always that opportunity to create a happy accident. Come to the show and see Midland and you just may see us play an interpretation of our own music.

Midland’s ‘The Last Resort’ is available to download and stream now. Watch the video for ‘Sunrise Tells The Story’ below:

Advertisement. Scroll to continue reading.
In this article:Featured, Midland