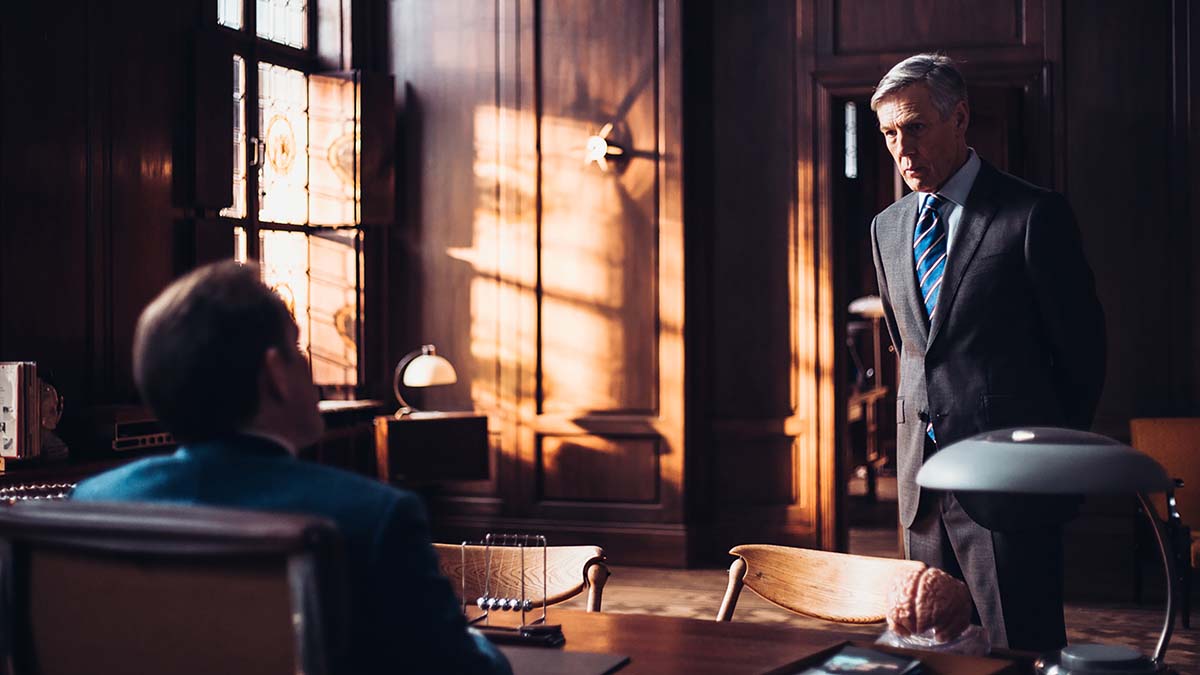 The case of a kidnapped child kept Jasper (Ben Miller) busy on the latest episode of ‘Professor T’.

The episode opened with Jasper looking at paintings of dogs that he imagined were barking. As the barking grew louder, Jasper started to bark back.

When Jasper arrived at work her found Ingrid (Sarah Woodward) admiring the muscle men in a fitness magazine. Ingrid then reminded Jasper about his mother’s invite to her exhibit but he brushed it off before imagining ripping up the invite in his office. The Dean (Douglas Reith) arrived abruptly to complain that Jasper had missed a meeting and suggested that his work with the police was detracting from his job.

At that time Lisa (Emma Naomi) and Dan (Barney White) arrived to ask Jasper for his help on a case involving a missing child. We then saw the child’s mother frantically looking for her child after finding her husband Max (Gideon Turner) unconscious on the floor. Lisa asked Jasper to speak with the family to go over their story.

Jasper accompanied Lisa and Dan to visit the family, who were already speaking with Paul (Andy Gathergood). He suggested that the child was taken because she’d witnessed the assault, leaving the parents in tears. Lisa took Jasper to one side to have a word and was told that Max might not be telling the truth. Jasper suggested that Max may know his kidnappers, and that wasn’t received well when Lisa confronted him. Jasper caught Andy drinking on the job outside the family home while Dan assured the family they would do everything they could to find their child.

We saw Charlie (Willow Rose Wood), the missing child, being pushed on a swing by a woman (Sarah Mayhew) outside a caravan.

Back at the family home Max was asked by his wife Lucy (Joanna Horton) if Kevin (Jonathon Sawdon) was involved in the disappearance of their daughter. As Lucy broke down, Max dismissed the suggestion.

At home, Jasper sorted through and threw away most of his mail aside from one envelope, which contained an invite from his mother. He shoved it in his pocket when Adelaide (Frances De La Tour) knocked on the door and asked why he hadn’t replied to her invitation. Jasper pretended he hadn’t received an invite so Adelaide passed another one to him through the doorway. He refused to commit and said he would get Ingrid to check his schedule.

Max and Lucy had a drink in the garden of their home and talked about Charlie. It was suggested that Max was perhaps too hard on their daughter and they asked their live-in nanny Sally (Elise Van Lil) to go and stay somewhere else.

Charlie was seen playing a game with the woman who had been pushing her on a swing. They had a row then the woman drugged some juice with sleeping pills and gave it to Charlie. Once Charlie was asleep, the woman cut out letters from a newspaper to make a ransom letter, and included a lock of Charlie’s hair.

Christina (Juliet Aubrey) and Paul arrived at the office the next morning to find Lisa and Dan had pulled an all-nighter. Lisa explained that Jasper didn’t believe Max but did seem to believe Lucy. They then went to see Kevin and questioned him about his relationship with Max. Lisa asked if Max had any issues with anyone and then quizzed him about their run in with the law for tax fraud.

Lisa received a call and told Dan that someone had made contact with the family. Paul was with the family and Lucy was suggesting ways they could raise the £100,000 demanded in the note. Max’s lack of a response led Lucy to accuse him of not believing Charlie was worth that amount of money. Lisa and Dan arrived, and were brought up to speed by Paul. Paul asked Lucy for a hair sample so they could confirm the lock of hair was Charlie’s but it was revealed that the child had been adopted. Instead, they asked Lucy for a hairbrush or a toothbrush.

Jasper continued to deliberate over his mother’s invite and turned to his fish for advice. He was interrupted by Lisa and Dan, who brought the ransom note with them. Before Lisa could tell Jasper that Charlie was adopted, he revealed that he already knew. When Lisa asked what the next step was, Jasper put on a record and turned up the volume, making it clear he wanted them to leave.

The woman holding Charlie was seen assembling a phone.

Lisa grew frustrated that they weren’t making progress in the case. Dan tried to comfort her and Lisa grew angry but that soon led to them kissing. Before they went too far, Lisa put a stop to things going any further.

Lucy opened the mail and inside one letter was the phone, which contained a message about where to leave the money. She called Max and pleaded with him to get the money so they could get their daughter back.

Lisa looked up Charlie’s nanny Sally Bain and discovered that the real Sally was dead meaning the nanny that had been living with them was a fraud.

Max took a bag containing the money to the agreed location, while Lucy cried at home. Using the phone, Max replied to the message.

Sally was brought in for questioning and Lisa revealed that they knew she had committed identity theft. Her real name was Nicky and Sally had been a friend of hers. Nicky talked about how they used to go drinking together and Sally let Nicky live with her when her mother kicked her out. Nicky told them that she went to prison for robbery and that Sally overdosed while she was in prison. As Nicky continued to explain how she passed herself off as Sally, Jasper made it clear he wasn’t buying it. Lisa shared the theory that Nicky was in on the kidnapping, which she denied. When pushed for an answer, Nicky said it wasn’t her business to talk about but then painted a picture of a troubled and needy child. She also said that Max lost his temper with Charlie and suggested that he physically abused her.

Paul checked out Nicky’s statement and said it was verified while Christina said there’s no way Nicky could have been heavily involved as they had footage of her at the cinema on the night the kidnapping happened. Jasper was forming a theory but he didn’t want to share it until he had further evidence.

Max and Lucy were talking about why they hadn’t heard anything since he dropped the money off, and they were interrupted by Lisa and Dan who wanted to speak to Max. They took him in for questioning and accused Max of abusing his daughter, something he vehemently denied. When Lisa told him to tell them what he knew, Max revealed that Kevin organised the kidnap and arranged for him to be beaten up. Max then told them he paid the ransom.

Lisa and Dan spoke with Christina and Jasper, and they didn’t believe that Max owed Kevin money. Paul was annoyed that he was being ignored and he hit out at Lisa and Dan for conducting a sexual relationship. Jasper then revealed all about Paul’s drinking, causing a fight to break out.

Jasper returned to the Turner’s home. While Lucy tried to scrub blood out of the carpet, Jasper looked through a photo album. The police meanwhile searched Kevin’s warehouse where they found the monkey that Charlie had been holding in a photograph. Kevin said he didn’t kidnap Charlie but he did organise for Max to be beaten up.

Nicky went to see the woman who was holding Charlie and it was her mother Jenny. She asked if Jenny had demanded money before asking where Charlie was. Entering the caravan, she found Charlie asleep on the sofa and couldn’t wake her up. Nicky confronted Jenny asking what she’d given her and Jenny replied telling her Max had put the £100k in the location she asked for and they needed to pick it up.

Jasper called Lisa from the roof. Lisa told him that Paul was taking a forced leave of absence. Jasper was still adamant that Kevin had nothing to do with the kidnapping and told her she had to put the ransom money back, which the police had retrieved.

In his class, Jasper was talking about cars with broken windows and then moved on to discuss the case he was investigating. Jasper theorised that Nicky found Max unconscious and suggested that she took Charlie. He returned to his broken window example explaining how one crime was used to cover another but that a broken window always lets light in eventually.

Dan and Lisa turned up at the location where Jenny was collecting the money. Surrounded by police, Jenny threatened to hurt Charlie and put a knife to her throat. Dan talked her down as Nicky watched on horrified. Jenny and Nicky were arrested, and Nicky was taken back in for questioning. Nicky revealed that things had got out of hand and that she called her mother to collect Charlie. It was also revealed that Jenny had planted the monkey in the warehouse.

Back in his class, Jasper was asked why Nicky didn’t report Max to the police if she suspected that Charlie was being abused. Jasper dropped the shocker that Nicky was Charlie’s biological mother and we saw Nicky telling Lisa and Dan that she just wanted to be near to her daughter. As Nicky was led away she saw Lucy and Max with Charlie. Nicky apologised to the Turners and as she walked away, Charlie ran up to her and hugged her.

Jasper turned up to his mother’s exhibit and Ingrid watched as he left within seconds. Adelaide asked Ingrid if there had been any interest in her work and there had. The Dean said it was a shame Jasper hadn’t been there but Adelaide insisted he was there in spirit.

The episode ended as it had begun with Jasper barking at the paintings, which he’d bought unbeknownst to his mother.

Read our recap for episode 1 ‘Anatomy of a Memory’

Read our recap for episode 2 ‘A Fish Called Walter’