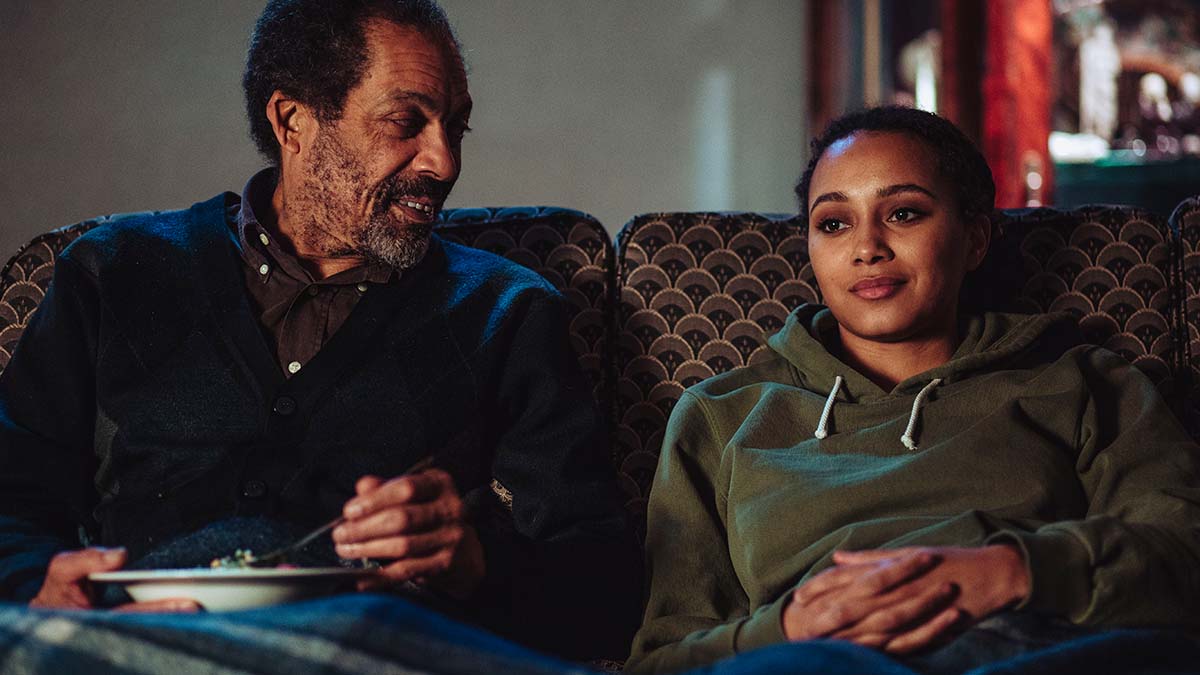 Jasper (Ben Miller) was pulled into a hostage situation on the latest episode of ‘Professor T’.

If you want to avoid spoilers for ‘Professor T’ stop reading this article now.

The episode opened with Jasper walking to his home where he opened a box of records and put one on. As he listened to music, we saw a woman being instructed to tie up another woman by two masked burglars as a man ran through the streets to a jewellery shop. The burglars were interrupted by another woman and her young child, as the man ran out of the jewellery shop with a bag and was hit by a car.

Once his record stopped, Jasper was interrupted by the sound of a dog barking and he looked out the door to find his mother Adelaide (Frances de la Tour) outside. The two had a conversation in the studio where Jasper asked why his mother was there and she pointed out that she’d told him she was going to move back into her studio if he was moving in the family home. Adelaide also reminded him that they were having lunch. Jasper returned to the house and kept seeing his mother everywhere, causing him to run up the stairs and fall down when Adelaide’s dog barked at him. As he lay on the floor, Jasper called for an ambulance and asked them to put on no sirens.

Lisa (Emma Naomi) and Dan (Barney White) arrived on the scene where Vijay Banerjee (Kammy Banerjee) was being wheeled into an ambulance after being hit by a car. Dan revealed that they’ve found lots of jewels in Vijay’s bag before the two of them went to the Banerjee home where the burglars were panicking now a child was involved in the hostage situation. As the doorbell kept ringing, the burglars quickly formed a plan and saw Lisa and Dan leaving the building. As the burglars argued one of the hostages, Padma (Mavin Rasheed), edged her chair towards her bag while being begged not to cause any further trouble.

Lisa and Dan flirted as they waited to speak to one of Vijay’s employees, Amrit Khan (Aurora Marion) and informed her that Vijay had been hit by a car. She offered the home phone number for the family, which Dan called. At the same time Padma reached her bag and managed to get her phone but was spotted by the burglars who told her to move back towards her family.

Lisa asked about the jewels that Vijay was carrying and Amrit said they could have been for a client. When they asked to see the shop’s safe, Amrit refused but when Lisa and Dan threatened to return with a warrant, she relented. As she opened the safe, Amrit spotted that there were a significant number of jewels missing. Lisa and Dan raced to the hospital to speak to Vijay. He was barely conscious but managed to tell them that his family was going to be killed if he didn’t leave the hospital.

Jasper was release from hospital armed with a pair of crutches following his fall down the stairs. He called Ingrid (Sarah Woodward) to pick him up and she found his situation very amusing.

Christina (Juliet Aubrey) and Paul (Andy Gathergood) introduced hostage expert Ben Sparrow (Charlie Cattrall) to Lisa and Dan. They discussed the information they knew about the situation so far and Ben suggested that they had to wait until the situation escalated further.

As Ingrid wheeled Jasper into his office, the phone rang and it was Adelaide. Jasper started to see Ingrid speaking his mother’s words and then imagined his goldfish was talking.

The burglars began to panic that Vijay hadn’t returned to the house. They decided to get Priyanka (Natasha Atherton) to call her father. The call went to voicemail and when Priyanka spoke in Indian, the burglar insisted she spoke in English so he could understand what she was saying. Dan informed the team that Vijay’s store had been the target of a robbery that didn’t pan out and Ben bit his head off telling him he was trying to deal with the situation.

Moments later Jasper arrived and explained his injury. Christina and Paul insisted they didn’t need his help on the case but Jasper asked if he could rest his foot while he was there. As he took a seat, it was clear that he wasn’t going anywhere.

Adelaide went to visit The Dean (Douglas Reith) and discussed her concern that Jasper was gardening based on the lie Jasper had told Ingrid. She worried that he was planning to stay at the house and asked The Dean to speak to him.

Jasper chatted to the team about the hostage situation and when he tried to offer his thoughts to Ben, he wasn’t received warmly. Jasper shared his three rules for hostage situations but Ben wasn’t interested.

Vijay’s phone rang again and Jasper went rogue and answered the phone. He told the burglars what had happened and then hung up the phone. Ben and the team heard Jasper and a heated discussion followed after the call. As Jasper explained his methods, Ben threatened to have Jasper arrested. Christina took Jasper to her office and told him to stay there while the team moved to extract the hostages from the Banerjee home.

As the police surrounded the Banerjee home, the burglars panicked as they noticed snipers surrounding them. Vijay’s phone rang again and this time Ben answered it telling the burglars that their demands were out of the question. He revealed that they would only speak to Jasper so Christina went to get him. Jasper meanwhile was talking to himself.

Jasper told the burglars that he wouldn’t speak to anyone who was holding a child hostage. He then hung up the phone and returned to Christina’s office. Christina was furious with Jasper’s conduct but Jasper tried to deflect the conversation to talk about why she had a suitcase in her office. Christina’s phone rang and she told Jasper that the child and her mother had been released.

Dan comforted the hostages that had been released as Lisa looked on and smiled. She stared back at her monitor where she could see Padma and her mother Leela (Nila Aalia). Leela asked Padma to get a pair of scissors from a drawer in the room they’d been sent to so she could cut her free. They discussed Vijay while the burglars called Jasper again with demands for £1 million, a car and free passage claiming they would shoot the hostages if they didn’t get what they asked for. Jasper told the burglars that they were bluffing and then told them that Vijay had died. Ben was furious but Jasper explained that he had to convince the burglars that their situation was hopeless. The burglars took Priyanka, leaving Leela alone, as a gun shot was heard.

The police stormed the building where they found Priyanka unharmed. Leela ran to comfort her daughter as Lisa and Dan entered.

Christina received an update on the situation and told the team that the whole family had been rescued but the burglars had managed to escape. That led the team to wonder if the situation was an inside job and they suspected that Vijay was trying to commit insurance fraud. Ben was impressed with Jasper’s theory.

Vijay was visited by his family in hospital.

Jasper was told by Christina that he had to go home at some time and then she said she was separating from her husband. Jasper then imagined that they were having a furious row about their relationship. Lisa and Dan interrupted them to reveal that the burglars had been found in the parking lot of the building waiting in their car to make their escape.

Leela and her daughters were brought in for questioning to see if they could ID the man whose face Priyanka had seen. Priyanka looked at the photos of the two men and she said that she didn’t think it was them. Lisa suggested that Priyanka was lying because they’d found the two men’s fingerprints in the building. Dan revealed that they’d dug into Priyanka’s business, which was struggling. Lisa asked if Priyanka had been refused a handout from Vijay.

We then saw Priyanka helping the burglars get out of the house as the truth dawned on Leela and Padma. An upset Padma left the interview room in tears followed by a furious Leela. Priyanka begged her mother to come back but her pleas were ignored. She then broke down and apologised for what she’d done.

Jasper was furious that he had only been half right about the case.

Lisa returned home and made her father Herman (Ben Onwukwe) his favourite pasta. As they watched the news, Lisa ignored a call from Dan but thought after their one-night stand. When her father enquired about Dan, Lisa dismissed him as a friend she worked with and Dan texted her to ask if she fancied a drink.

Jasper confronted Adelaide in her studio and told her that it wasn’t going to work out with her living in the house. He blamed her for him getting the case wrong but Adelaide dismissed him before insulting the track suit he was wearing.