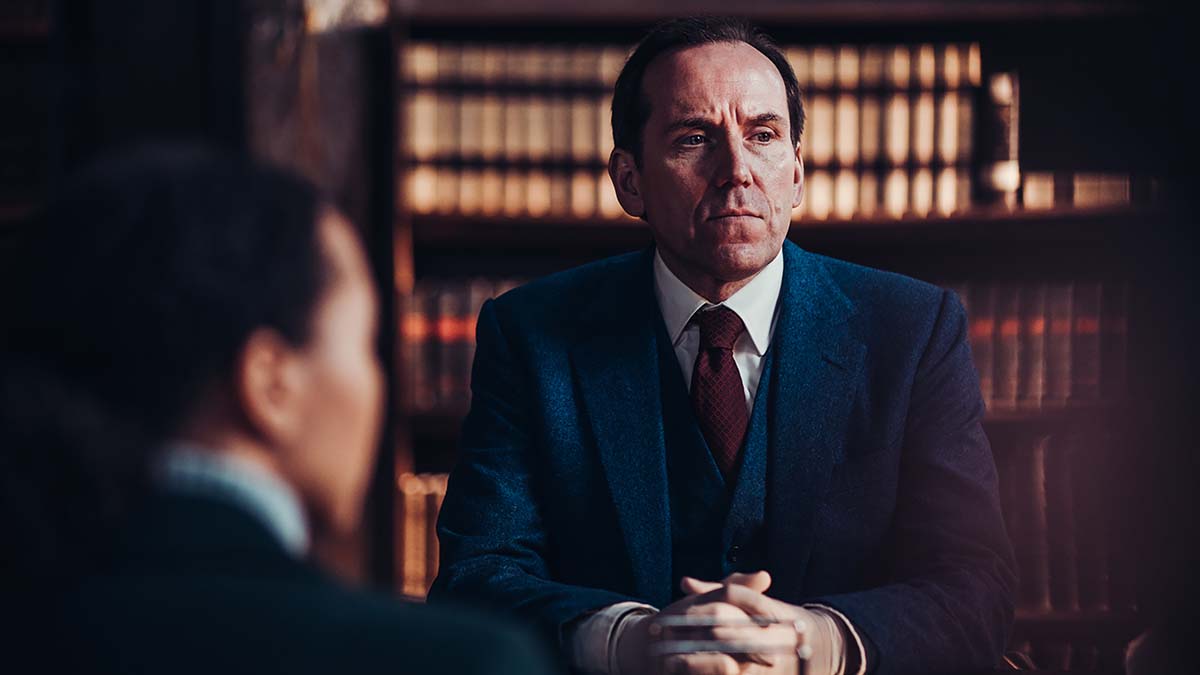 Jasper (Ben Miller) helped the police solve the mystery of a librarian who was poisoned on the latest episode of ‘Professor T’.

The episode opened with Jasper teaching his class while we saw a social gathering at a museum take a tragic turn when a librarian died after having his drink poisoned. Jasper asked his class to write an essay on ‘the nature of a criminal’.

Dan (Barney White), Paul (Andy Gathergood) and Lisa (Emma Naomi) arrived at the crime scene and discussed the large number of suspects they would have to work through from the party.

Jasper arrived at work and chatted to his receptionist Ingrid (Sarah Woodward) who told him that the police were waiting for him in his office. Lisa and Dan briefed him on the murder and suggested that the person murdered may not have been the intended victim. Jasper pointed out that poison is rarely used for murders but when it was, it tended to be women who carried out the crime. After handing over details of a potential female suspect, Jasper asked Lisa and Dan to leave, and Ingrid suggested that Claudine Frogatt (Tess Bryant) may have been targeting her womanising husband Roy (Dugald Bruce-Lockhart).

Christina (Juliet Aubrey) told Paul that they should consider putting Jasper on a retainer given how useful he’d been in the previous case. After she left his desk, Paul poured himself some booze and secretly drank it.

Jasper went to speak to Claudine and mentioned her husband’s infidelity, which she appeared to be shocked by. As they spoke, Jasper hallucinated a bunch of cheerleaders performing in the corridor before making it clear to Claudine that she was a suspect in the potentially accidental murder of the librarian.

At home, Jasper was organising his new fridge when his mother Adelaide (Frances De La Tour) unexpectedly turned up at the door. They spoke through the door and Adelaide was still frustrated that Jasper had decided to move back into the family home.

Dan handed a file to Lisa and told her that Claudine had come to the station voluntarily to talk to them. Claudine opened up about her husband and told them that she’d barely seen him but became suspicious that he was cheating on her when she found a receipt for a hotel room. As she sobbed, Dan handed her a tissue and Claudine said there was something far worse than the credit card receipt.

Dan and Lisa went to see Roy and told him that he may have been the intended victim. They also revealed that they knew he had been threatened by a man and that he was having an affair.

A young couple were seen in a hospital room where a young child was colouring in bed, clearly battling cancer.

Lisa went to see Jasper and told him that Claudine had been to see her. Jasper admitted he was behind Claudine’s sudden desire to talk but made it clear she wasn’t trying to murder her husband. When Lisa accused Jasper of wasting her time, he put a record on and she left.

The man, Jonathan Fell (Leander Vyvey), who we saw comforting his wife and sick child got out of a taxi and went to a building site, where Roy was waiting. The two men struggled and Jonathan plummeted to his death. Paul suggested that Jonathan committed suicide and Lisa pointed out that from her time studying criminology that suicidal people usually took off their glasses before killing themselves, which Jonathan hadn’t done.

Jasper spoke to The Dean (Douglas Reith) and it didn’t take long before the conversation turned to Jasper moving into the family home. The Dean tried to talk to him on behalf of his mother but Jasper didn’t want to hear it.

Lisa visited Lena (Lizzy Watts) at hospital to ask her about her husband Jonathan. A distraught Lena couldn’t answer the questions as she was too upset so Lisa suggested they try the next day.

Jasper sent a text message and went to feed his fish, before calling a florist to order flowers with a note that said ‘Sorry’.  His next stop was to see Christina who offered him an ad-hoc role as an adviser to the team and he told her that he would give it some thought. Christina then asked if he would sit in on an interview with her to ‘spare’ Paul.

In the interview room, Lena was ready to answer questions and Jasper told her that there was a high probability that she knew her husband’s murderer. When Jasper said that Jonathan was very angry, Lena snarked back that he had every right to be.

Paul took the addition of Jasper to the team poorly and bickered with Christina about him. Jasper and Paul then had an awkward encounter at the coffee table and Jasper remarked to Paul to enjoy his Irish coffee. Paul’s response brought back a memory of Jasper’s father and the men were interrupted by Christina.

Christina told the team that the Fells were taking legal action against the construction company that were building the flats where Jonathan was found dead. They blamed the housing company for making their child sick. Lisa found a link pointing out that Roy worked in planning at the council. Jasper said that Jonathan had confronted Roy when he found out his home had been built on contaminated land and he handed a list of donations to Lisa for her to ask Roy about.

Lisa showed a photo of Jonathan to Claudine and she confirmed that he was the man who threatened her husband. Roy was brought in for questioning when his prints were found on Jonathan’s phone. Lisa asked if Roy had taken a bribe to ignore the contaminated land and asked if he knew Jonathan. Roy lied and Lisa revealed that the Fell’s daughter’s sickness was likely linked to the contamination. Lisa then showed Roy a picture of his footprint at the building site and he was asked to take his shoes off.

Lisa and Dan went through the events of the night that Jonathan was murdered. We saw Roy asking Jonathan to drop the case and in exchange he’d sign over the deeds of a new property to him. Jonathan refused and revealed he’d been recording the conversation, which caused Roy to try and grab it. Jonathan fell to his death and Roy ran down to erase the recording from the phone but forget to wipe his fingerprints. Realising he’d been caught, Roy said it was an accident and he thought people would think Jonathan committed suicide.

Following the interview, Dan asked Lisa to ‘get pissed’ with him but her mind was still on the case. Lisa pointed out that no one saw Jonathan at the museum but Dan convinced her to go to the pub with him.

Jasper sat on the roof and thought back to his childhood again, with memories of his Dad shouting at him before he found him hanging in the hallway.

At the pub, Dan promised not to take advantage of Lisa if she got drunk again. Lisa’s phone rang and it was her father saying he thought he smelt gas at the house. When she put the phone down, she made her excuses and left, leaving Dan pissed off.

The next morning Lisa followed a lead about Jonathan while Jasper’s struggled to walk through a hospital corridor due to his fear of germs as he tried to find Lena. Jasper found Lena and she asked to be left alone but he ignored her. He said that Lena needed to unburden her conscience as her daughter would need her when she recovered.

Lisa walked into the office with a smile on her face and she asked Dan to come with her to see Paul. She revealed that she’d spoken to the catering manager and discovered three female members of staff that hadn’t been on their original lists. That led them to Lena, who was the real culprit that had tried to poison Roy. Lena said goodbye to her daughter and was arrested.

In the interview room, Lena claimed that Jonathan had played no part in trying to poison Roy. Lena explained that she was researching alternative treatments for her daughter when she came across a natural form of cyanide that she could buy online. She told Lisa and Paul that she wasn’t sure she was going to go through with it but when she heard him boasting about his donations, she went ahead with the plan. Once she drugged the drink, it was snatched from her tray by the librarian before she reached Roy to give it to him.

Ingrid found Jasper’s fish dead in the bowl and removed it from the water.

Jasper reprimanded his class about their poor essays and read out an old essay from Lisa.

Lisa went to see Jasper and urged him to take Christina’s offer, which he said he’d already accepted. In his office, Jasper found a note from Ingrid thanking him for the flowers and telling him not to feed the fish. As he looked in the bowl, a fish was in there that told him its name was Walter.

Read our ‘Professor T’ episode 1 ‘Anatomy of a Memory’ recap