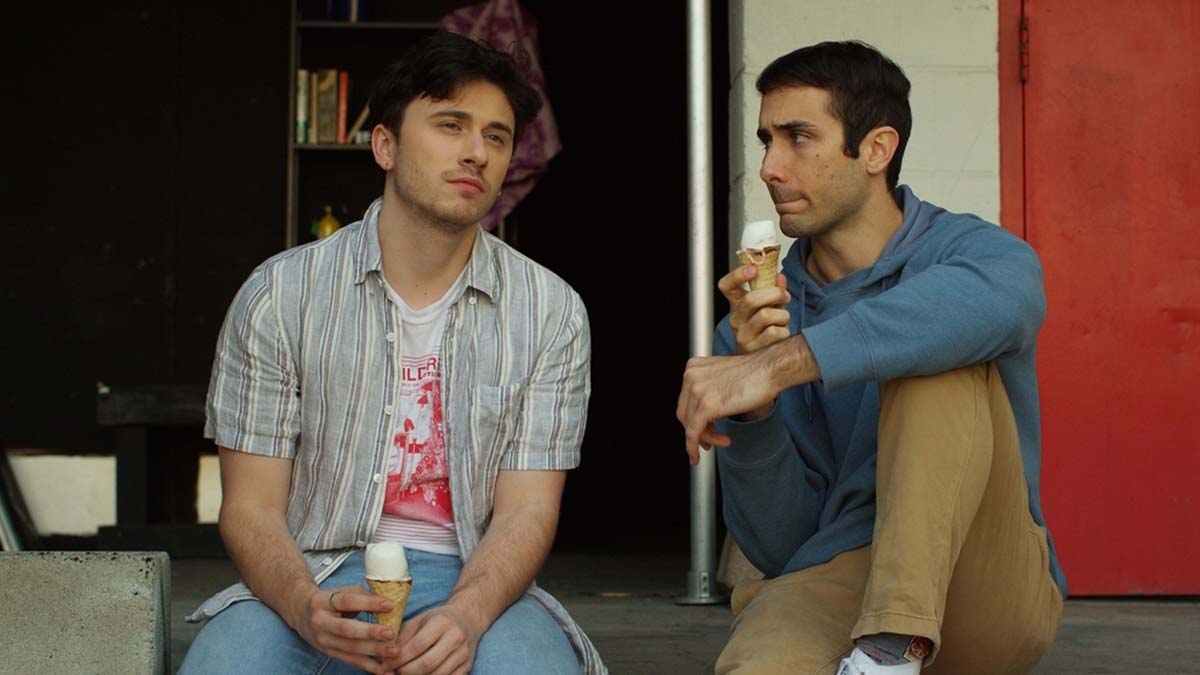 Aaron (Jason Alan Clark) and Jordan (Calvin Picou) have an awkward hook-up after meeting on a dating app. Nervous and inexperienced, Jordan is hiding the fact that he’s closeted and married to a woman, while Aaron’s disclosure that he has HIV looks like it’s going to stop the relationship before it even starts. Following the hook-up, Jordan ghosts Aaron but when the two men meet each other again, sparks fly and they embark on a passionate and intense relationship, ignoring the clear warning signs that they’re going to face an uphill battle.

Originally available as an episodic series, ‘Here Comes Your Man’ has been edited into a film for its DVD release. Writer and director Omar Salas Zamora captures the entire duration of the relationship that unfolds between Aaron and Jordan from their first awkward meeting through to their inevitable painful end. Aaron is keen to find someone to fall in love with and connect emotionally to, while Jordan is only just taking his first tentative steps out of the closet after hooking up with Aaron. That puts both men on very different trajectories, which they try to ignore even when it becomes far too apparent.

What Zamora does well is he highlights how difficult it can be for an out man to fall in love with someone newly out of the closet. Aaron believes that he can be enough for Jordan but their relationship opens Jordan’s eyes up to the bigger gay world, pushing him to want to explore threesomes and stepping outside of his burgeoning relationships. As Jordan embraces his new-found sexuality, he pushes Aaron further and further away, with his behaviour becoming increasingly more selfish.

There are some issues with ‘Here Comes Your Man’. While the relationship at the heart of the film is believable, it’s hard to get a real grip on how much times passes. For example Jordan’s decision to leave his wife and go all-in with Aaron happens incredibly quickly, without the character even questioning the choices he’s making. These are small quibbles as Zamora had a lot to fit into 90 minutes but it does make you feel like the whole thing speeds along without properly stopping to explore the nuance of the situation.

The performances are strong from the two leads. Jason Alan Clark is the stronger of the two, giving a much more emotionally involved performance. He makes Aaron a loveable character that you can’t help but root for, even when you know he’s not going to get the happy ending that he wants. Calvin Picou has a tougher job as Jordan because his character just isn’t that sympathetic. That being said, he’s got a believable chemistry with Clark so that carries much of the film.

‘Here Comes Your Man’ doesn’t really pack any surprises but it is an entertaining exploration of a relationship running its course. It could have benefitted from more detail in places to really draw out the motivations of the characters and the inevitable end may leave some viewers feeling cold. Zamora shows plenty of potential with this project and while it might not make a lasting impact, it was a film I enjoyed at the time.