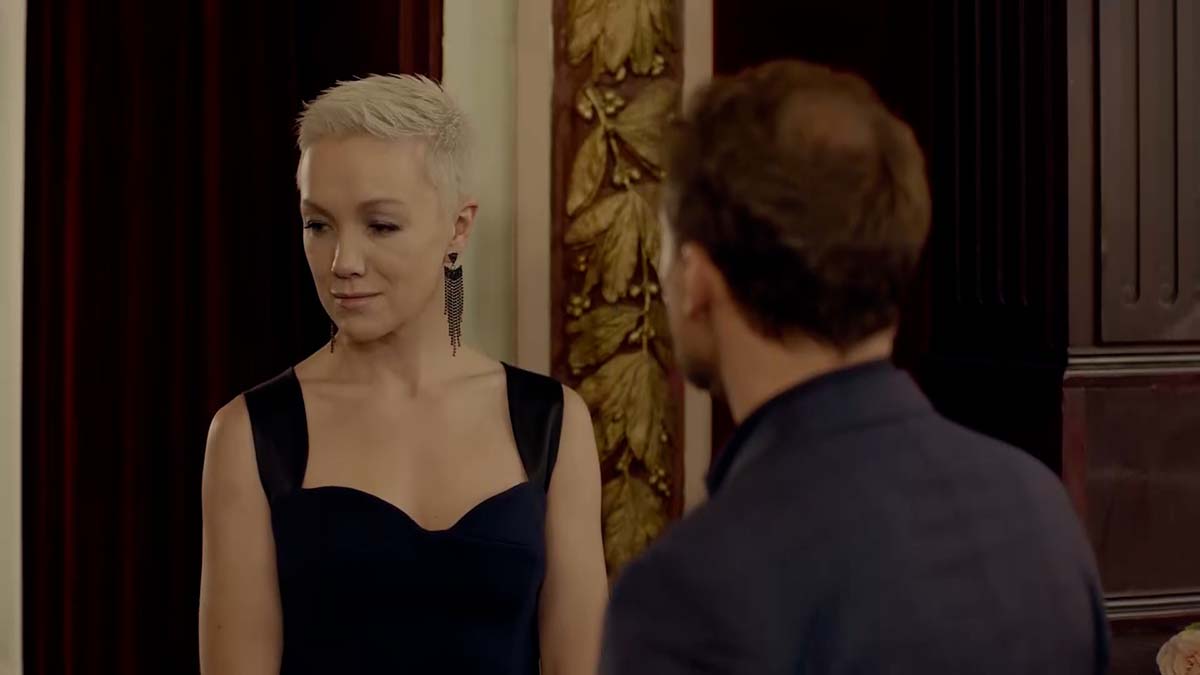 Cards on the table time – ‘Gold Diggers’ is saucy. At times, it’s really saucy. Don’t watch it with your kids. Or your parents. It’s all about beautiful young Russians – men and women – who are happy to use their looks and sexuality to get what they want. In most cases what they want is money and power. Or ideally both. Their moral compasses might be a bit off, but it certainly makes for compelling viewing.

We don’t tend to see much Russian drama in the UK (I can only think of another Walter Presents show, ‘The Sect’, and Netflix’s ‘Sparta’), so this is a brave move for Walter Presents to bring the show to a Channel 4 audience. But given the public’s proclivity for voyeurism into the lifestyles of the rich and gorgeous, I’m sure this show will appeal. Chuck in a murder mystery, and you have a recipe for some good viewing figures.

‘Gold Diggers’ (also known as ‘Russian Affairs’; and sometimes translated from the original Russian name of Soderzhanki as ‘The Kept Women’) is beautifully shot, showing Moscow as a contemporary, sexy metropolis, full of glamour and unspeakable riches – but with a dark and sinister underbelly of corruption and greed. You cannot take your eyes off it.

Daria Moroz, who plays Moscow cop Lena in the show, spoke to me via Zoom from her car in Russia – the wonders of modern-day technology still blow me away. Dressed in a simple white t-shirt and sporting a boyish blond cropped haircut, she looks and dresses very similarly to her character. But unlike Lena, Daria is a cheerful and smiling soul; warm, friendly and happy to chat.

Daria was destined to be an actor from birth:

“My mother was a famous Soviet actress (Marina Levtova), and my father (Yuriy Moroz) used to be an actor. Today he’s a well-known director in Russia.”

And it didn’t take long before a very young Daria got involved in the industry, too:

“I was just two and a half months old! It was a film called “Milyy, Dorogoy, Lyubimyy, Edinstvennyy (Dear, Dearest, Beloved, Unique in English)” directed by my mother’s good friend, Dinara Asanova. My mother was pregnant when making the film, and Dinara said to her “super, I need a baby girl!”. In the film, a young woman kidnaps a baby. She tells people that it’s a boy, but it turns out to be a girl. So Dinara needed a girl. But my mother said she thought I’d be a boy. Luckily she was wrong! That was my first role – quite a big role, actually.”

And she’s not exactly been idle since, with over 80 productions to her name since the early 2000s:

“I didn’t choose to be an actress; the profession chose me,” she says. “I really enjoy it. But in the past three years, I’ve been involved more in producing. I was the creative producer in season two of ‘Gold Diggers’. And I’ve got other projects, too, outside of ‘Gold Diggers’. That’s my main focus, and my main fun! I’ve been working as an actress for 20 years and now it’s the time to do something else.”

She enjoys the extra responsibility of being behind the camera:

“It gives me the opportunity to have full control of the project, and that’s amazing. It’s much more interesting to be behind the camera. When you watch the process from the other side, you see all the mistakes and good things you do as an actor. I think in drama school they should give students a chance to experience the other side of the camera, because that’s really useful. You realise as an actor that you’re just a little piece of it all – that the whole process is much bigger than just your role.”

Going back to ‘Gold Diggers’ itself, Daria has an interesting take on why she thinks this show will translate to a western European audience:

“’Gold Diggers’ is a reflection of modern-day Russia. Often, Russia is shown in films as Soviet and old-fashioned. But Moscow is very different today; there’s lots of things happening and, of course, lots of money. So hopefully ‘Gold Diggers’ will allow people to view the other Russia; the world of rich people, business people and people of government examined through a lens. It’s an honest and realistic view.  We don’t judge them. We’re simply viewing this small and concealed part of the population, seeing how they connect and interact in everyday life.”

And what of her character, Lena?

“She’s a simple police-woman. She’s not a part of that world, but she finds herself drawn into this part of society. She’s a strong character, and she’s enjoying the opportunities that (being surrounded by money) gives her. But she’s different to the other girls. Over the three seasons you will be amazed at how she changes, and how this way of life changes her. But she has to remain strong and be herself.”

The show looks incredible on screen – the opulence and extravagances are decadent in the extreme:

“And the diamonds are real! And the sex scenes are done by the actors. No stand-ins.”

Another aspect of the show that is impressive is the soundtrack:

“Our wonderful music producer in Ivan Kanaev and also our general producer, Irina Sosnoyova are both big music fans. The main track (‘My Love’ by Kovacs – a Dutch singer and songwriter) became a big hit here thanks to the show, and now Kovacs is famous in Russia.” Additionally, our very own Hugh Laurie has a track on the soundtrack, entitled ‘The Weed Smoker’s Dream’. But all of the music is brilliantly chosen and evocative.

We discussed the likelihood of a fourth season, and although Daria’s lips were sealed on the matter, the show has drawn such huge audiences in its native Russia, it would be pretty unthinkable for it to stop now:

“The audience for the show has been incredible. The show is broadcast on a streaming service START, one of the most fast-growing services in Russia with over 1.6 million paying subscribers.”

As to her future, Daria is very clear:

“I have three aims. I want to start producing movies and series, taking a project and following it from start to finish. Secondly, and I don’t know if I can do it as I’m shy about it, but I’m writing a screenplay and would like to develop that. And thirdly, acting. I’m well-known in Russia, but I’d love to act in Europe or America. I now have an English agent, so we shall see. Working with new people is really interesting to me.”

Walter Presents: ‘Gold Diggers’ will be broadcast on Channel 4 at 11pm on 20th July. The boxset is available on All 4 on Friday 16th July.