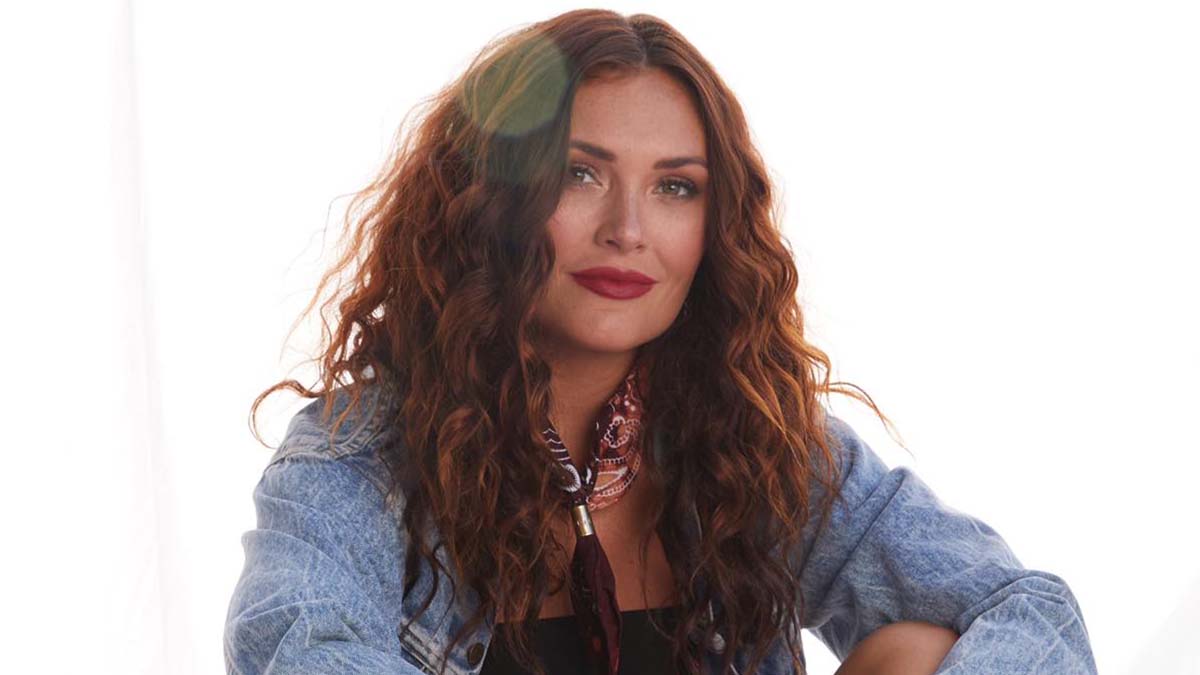 Singer-songwriter Kylie Morgan is an artist on the rise and on the strength of her debut EP ‘Love, Kylie’ she could well be the next big star in the genre.

Working with producers Ben Johnson (Track 45) and Shane McAnally, Morgan has crafted a stunning EP featuring 6 very different songs that showcase what she can do as an artist. It arrives on the back of the success of single ‘Break Things’ and is sure to establish her as an artist to keep on your radar.

I spoke to Kylie on the day of the EP’s release to discuss the making of it, find out her plans for more new music this year, and to talk about her unique perspective as a songwriter…

Your EP ‘Love, Kylie’ is incredible…

Thank you so much. That is that is so kind of you to say. I’m a little biased, but I’m pretty proud of it (laughs).

What I love about this EP is that it’s packed with personality, which is missing from so much of the music in modern Country right now. How important was it for you to show your personality and what makes you distinctive as an artist through these songs?

That’s so special for you to say, because that is exactly what I wanted for this EP. I’ve only played the singles game, where I’ve only released one song at a time. As a new artist, I want to have this direct contact with fans in a way that they don’t just know my songs, they know me with my songs. That’s what I was wanting to accomplish for this EP. I wanted people to continue to peel back the layers and see each part of who I am and see each chapter in my life. What I was hoping for this EP, was that it would relate to theirs and that it was very authentic, pretty much like ripping my heart out of my chest and being like, ‘hi, do you like it? Here’s an EP that’s everything that has to do with that’ (laughs). I’m so glad that you say that because at the end of the day, I’m not afraid to be vulnerable and I’m not afraid to say things maybe I shouldn’t say in my songs, or say things that aren’t politically correct. I just want people to know that I’m authentic and I hope that they relate to that, and I hope that they feel that way when they hear the EP.

What’s so fantastic about these songs is that every single one is so different and we get to see all the different sides of you as an artist. ‘Shoulda’, the opening track, makes me want to grab the tequila and head to the nearest karaoke bar…

My live show is so important to me because I feel like it’s the only way I personally, in front of people, can give people an experience and they can just check out from their life. It’s so important to me also because it takes so long for artists to put out music and to go through all of these different hoops that we have to jump through. The immediate gratification that we get from the songs that we write is during our live show. For my live show, I want to make sure that people can have mostly a high energy set, because I’m a high energy person, and I want people to be able to just laugh, dance, drink, and forget about whatever is going on in their lives in that moment and check out, and just have one of those moments in time they’ll never forget. I feel like those live up-tempo songs like ‘Shoulda’ will definitely help me do that.

You mentioned earlier that you like to say things in your lyrics that other people wouldn’t say and that really comes through on ‘Cheating On You’. The sentiment to that song is one I’ve not heard before, that idea that you’re with somebody but so so far apart from each other emotionally that you feel like strangers. It’s an incredibly vulnerable song. What was it like to write?

I’m in a very happy relationship, I just got engaged last Monday so obviously, it’s working out…

Thank you. We’ve been together for six years and when you’re together for that long, you are not going to have a perfect relationship – no one is – and there’s going to be a point in time where you start to drift apart. That is where you either fight for it or you give up on it, it’s a make or break moment, which I feel like a lot of relationships have. With Jay (Allen) and I both being touring artists, both having our own schedules, our own teams and being on usually opposite sides of the country or in a different country, we were going through a time where even though we’ve been together for so long, we were drifting apart. After I wrote the song, I felt so much at ease. After I write every song that I’m going through the thing that I’m writing about, I just feel better about it, it’s almost like a big exhale. It also helps me understand my feelings better so that I can present them to him, or whoever I need to present them to in a way that I can organise my thoughts. After I came out with that song, I played it for Jay and he was like, ‘I hate this song’ (laughs) and I was like, ‘no you don’t, you just hate why I had to write it’. At the end of the day, obviously we got through it and it’s one of those pieces in our story that we did overcome. I want people to know with a song like this, that when you go through this in a relationship, you can overcome it and you can fight for it because we are a living example of that.

That song is so powerful when we live in a world where people think what they see on social media is real. I’ve been with my husband for 18 years, six of which we’ve been married, and I can relate to the lyrics of that song. We’ve been through those ebbs and flows, and life isn’t what people tell you it’s going to be…

My favourite thing to relate it to is people say our taste buds change every seven years so why wouldn’t we change every 5 or 6 or 10 years. It comes down to whether you either grow together and you fight for that change, or you use it as an excuse to just run away. I know you totally get that, being with someone for that long. You’re gonna change. We’re all human beings and we go through seasons and we go through seasons with our taste buds. We just got to fight for that and hopefully it works out in the end. It sounds like you got it figured out as well. That’s amazing.

I spoke to one of your producers and co-writers, Ben Johnson, recently and he was telling me this EP was going to be amazing. What was it like working with him and Shane McAnally on this collection of songs?

Honestly, finding the words for the whole process…. I’m a writer, and I still haven’t been able to figure it out. I actually have been very good friends with Ben, since neither one of us had publishing deals. We started writing together when I was 19 years old, I had just moved to Nashville, and we just immediately clicked. It wasn’t just like a writer relationship, it became such a brother/sister friendship was just undeniable. We became better friends and we ended up hanging out more as friends than we even wrote together. When it came to the magic that we have in the room creating together and me being able to be so open with my life in a way that I couldn’t be with other people because we were so close, I think that’s why we were able to create the things that we were able to create. We were so open with each other and so honest, and we knew each other so well. Mashing this new producer and writer with Shane McAnally, that has 50-something number ones and who has undeniably shown his talents over and over, who also believes in me and knows me in a way that no one else does, to bring those two energies together was absolutely incredible. I wish I could do like it every day because it was so magical.

You’ve set the bar so high for yourself now. I have no idea how you’re going to follow this EP up. Have you started thinking about that yet and are you feeling the pressure?

Oh, we’re just getting started! (laughs) I have about 500 songs in my catalogue right now that I’ve been waiting at the door to run through. I actually already have an idea of where we’re going next and where we’re going next after that. I’m definitely a planner. I’ve had my whole life to map this out. I feel no pressure at all. I’m more just excited to continue to release thse songs that have been pretty much in my song catalogue for so many years. For instance, ‘Cuss a Little’ I wrote when I was 19 and I’m 25 now. I have these songs that I’ve been writing over the course of 10 years that finally get to live out in the world. Now that people can see the whole ‘Love, Kylie’ together, these are just the first six chapters and they’re going to help me continue to write the rest. I have so many new things that I can’t wait to show people. It’s less pressure and just more excitement for me.

That’s what’s so exciting about this EP. I feel like it’s only scratching the surface of what you can do and I’m so excited to see where you go next. I honestly have no idea how you’re going to follow it up…

Well, it’s a surprise! I feel like I have proved that the connection between me the fans and the music is connecting. I’m hoping that with all these incredible people on board now, that it’ll get easier for me to release more music quickly. I’m even looking at wanting to release more music by Fall, as far as another body of work whether it’s an EP or whether it’s an album. I’m just excited to continue this journey and continue to get music out there, and honestly just to get more songs that people can turn to for whatever they’re going through, and be that book that people can put on their bedside and read before bed and feel at ease before they go to sleep. I’m really excited to just continue to put songs out there and continue to meet new fans.

Please! Oh, my gosh. I’m going for a month this time (laughs). I need to redo that whole thing (laughs).

Kylie Morgan’s EP ‘Love, Kylie’ is out now. Watch the video for ‘Shoulda’ below:

In this article:Featured, Kylie Morgan