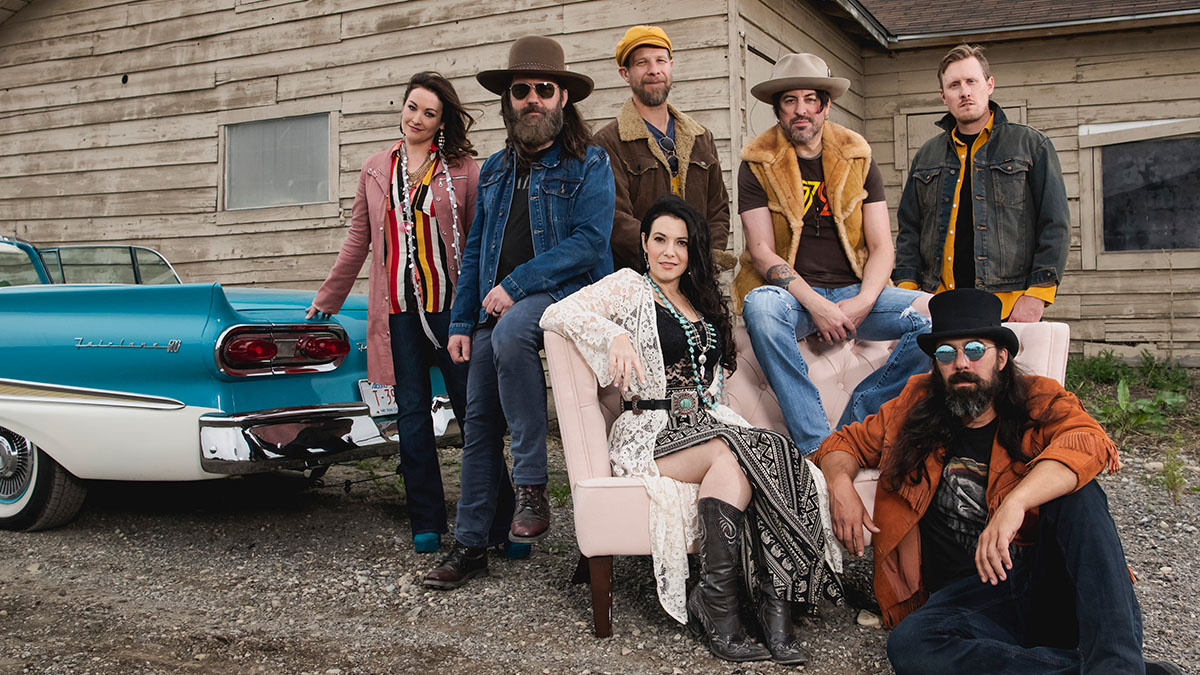 The band began to materialise in 2016 and Lacina and Little, who had both worked as session musicians, enlisted their friends from the world they’ve been a part of for years including Murray Pulver (Crash Test Dummies), Clayton Bellamy (The Road Hammers), Matt Andersen, Dave and Joey Landreth (aka The Bros. Landreth), Russell Broom (Jann Arden), and ace fiddler Shane Guse.

In December the band released their winter-themed collection ‘Heart in the Snow’ and this Friday they will release their debut album ‘Go By Feel’.

I spoke to Candace and Mike recently to discuss the making of the album, find out what they’d learned during their time as session musicians, and to talk about the origins of the band…

Your album ‘Go By Feel’ is being released this week and it arrives as the pandemic seems to be coming to an end. How are you feeling about it?

Candace: We’re excited to get this record out. We released the first single a year ago, in the pandemic, there were things that we could plan for and anticipate. I don’t think anybody thought that this would go on for as long as it has. As far as releasing the album, it feels hopeful because it feels like we are seeing the end. A lot more people are getting vaccinated and concerts are starting to open up. It seems like a good bookmark open up the next chapter of whatever the next year will bring.

Normally you’d test these songs on the road but that’s not been possible. How have you managed to test them?

Candace: We did have a chance before the pandemic started to play a bunch of shows and workshop them a little bit. We’ve actually also recut these songs a few times too because we have a recording studio and because we are working session musicians, we were able to record them in a few variations and then land on these versions to move forward. I don’t know how many songs off the album are the second or third version but yeah it’s been great to be able to take them for a test drive (laughs).

Now that things are opening up across the world, you must be excited about getting out on the road?

Candace: We’re so excited about the album but more than anything, we’re super excited about the band. The level of musicianship in the band and how it was born, that’s a whole experience that you can’t really translate in recorded material either.

These songs were written to be played live so I can’t wait to hear them in that way. You mentioned about recording various versions of the songs. Was that simply because you had the time to do it or were you just trying to get them as perfect as possible?

Candace: I think it was a combination of both. There were some songs that weren’t quite as developed or as ready so we went in with one idea in the studio, but the philosophy making this record was to, as the title suggest, ‘Go By Feel’ and follow your intuition. We did a few rounds of bed tracks and we got to the end, and we went, ‘you know, it’s not the right key’ and that’s a big thing. Even if the beats per minute were great and the feel was right, you have to recut it because it felt like it needed a different life. That was the whole spirit of the record.

Mike: We’re both session musicians and and I believe with recording is all about energy. If the energy is not just totally right in the room at the time of conception, or the making of the song in the studio, it’s just not right. You can feel that when you hear that music back and then you have to make that hard call of ‘we’re going to recut this’. Both of us are perfectionist by nature so it’s not unusual for us to redo things many, many times until we get it where we want it. That’s what is exciting about this record, we’re really proud of it and we feel that the songs landed exactly where we wanted them, and we didn’t have to compromise.

Was there any particular song that was difficult to get right?

Candace: That’s a good question. Sometimes there’s like perfection in imperfection as well. One of the songs for me that that is ‘Catch That Train’. It’s track number one but it also was one of the first songs that we recorded live off the floor and we kept the original version of it but sometimes it takes two or three rounds for musicians to just settle in and really relax. When we recorded ‘Catch That Train’ there’s a bit of a drive to it because the musicians from live on the floor, there was excitement. For me it feels in moments a little rushy but it suited the song. Sometimes that intense energy works as well. We decided to keep it even though we probably could have taken the second or third playthrough.

Mike: We had to make the decision to pick the human element of things and go, ‘that’s okay because that’s what really happened on the floor in the studio. There is a bit of a nervous energy, but it translates well in the song so let’s just leave it’. There’s lots of moments in all of these songs where we’ve just let things be.

Candace: You hate it when I point out some of the things that are imperfections like in a vocal, I’ll say, ‘oh, did you hear this little click’ (laughs) and you hate it when I point that out because you’re like, ‘oh, now I can’t unhear that’ but nobody else would hear it unless you’re paying attention (laughs).

Candace: We call them little gremlins and we know that they’re not obvious to the listener. We’re deep diving into the music so much every time it goes by, by the time you finish a record you’ve listened to it a lot of times. Every time it goes by now, I know there’s a few spots that you’re like, ‘why did you have to point that out?’ (laughs)

Mike: You literally have to learn how to pick your battles when you’re producing music and what to let go and what to fix. I think we’ve been in the game long enough that we’ve landed in a spot where we split the difference and hopefully the right place.

Candace: We’ve always played in support of other artists, which has been incredible. It’s been a great opportunity to build our careers and certainly travel the world and have a lot of fun doing that. We had some songs that maybe didn’t have a home for any of the records we were producing, or any of the artists we were working with. We wanted to record them and see what happened. It’s been a very different experience stepping forward as an artist, as opposed to finding that space in support. The great thing about the band is everybody comes from that background. When the live show happens, it’s such a good feeling because some people will step in, and you know your role as well and where not to play. That’s a really important skill as a backing player.

Mike: Just to give you a little bit more backstory, Candace and I are married. We did meet in the recording studio a long time ago on a session and over the years we’ve played on albums together for other artists and we’ve toured together. Along the way, we’ve written a lot of songs together and I think at a certain point, we were just like, ‘first of all, let’s record some of these songs, and let’s not give them to other artists and second of all, you can be in the most beautiful place in the world like Zurich having a drink under the stars and going this is amazing but if you don’t have anybody to share with, it’s just not as special’. One of our mottos was let’s try to get on the same plane going in the same direction for once so if we can do a project together, wouldn’t that be amazing to be able to share these experiences?

What would you say have been the biggest lessons you’ve learned as session musicians that have helped you with this record?

Mike: That’s an easy answer for me. When you’re a young lion and you’ve worked really hard at your craft, and you’ve got a lot to say and you’ve got a lot of ammunition at your fingertips, the biggest thing about being a session musician is learning what not to play, and serving the song. It’s all about getting to the essence of what the song needs, removing your ego from that, and just simply serving the song and delivering what the song needs. That’s what you learn after years and years as a session musician is really just going right to the core of what that song needs and delivering the right part. That’s allowed us to sharpen that sword. We’ve also produced a lot of records, we’ve produce a lot of records together, so having done that you see records from the very beginning, from the writing phase with an artist, right to the release phase. We’ve been through that process many, many times, which is helpful for us.

Candace: You don’t even realize when you’re recording, there are things that subconsciously people hear and you don’t even realize it. When there’s that magic in the studio after you’ve spent a lot of hours in the studio, you know that when everybody brings the right energy, you’re just capturing sound and you’re capturing vibration. As a session musician, it’s super important to have the right energy that you’re not making it about yourself. It’s about this creation.

Mike: It’s all about not playing cerebrally or from your head. It’s all about getting to your heart. If you can remove the ego from the equation you can play and deliver much more from the heart. That’s the energy that she’s talking about that

Candace: It makes it safe to make mistakes too. For me, that’s the freedom. Stepping forward as an artist it isn’t really about you. You hope that the listener feels something that’s healing or connecting, and that’s really what it’s about. Even if there are mistakes or imperfections, it was just meant to be so. We certainly wish that we could come and play and be with you there live Pip, that would be great. We’re really looking forward to that.

Do you think you might be able to get over here next year?

Candace: Yeah, I think so. We’re hearing some positive things in Canada. They’ve been really quick to roll stuff out as far as vaccines go so I feel like 2022 might be really the magic of what we’ll be able to. To get out of here for a little bit.

Mike: We’re gonna do everything we can you get over there.

The Hello Darlins’ debut album ‘Go By Feel’ is released on Friday 11th June 2021. Watch the video for ‘Prayer For a Sparrow’ below:

In this article:Featured, The Hello Darlins