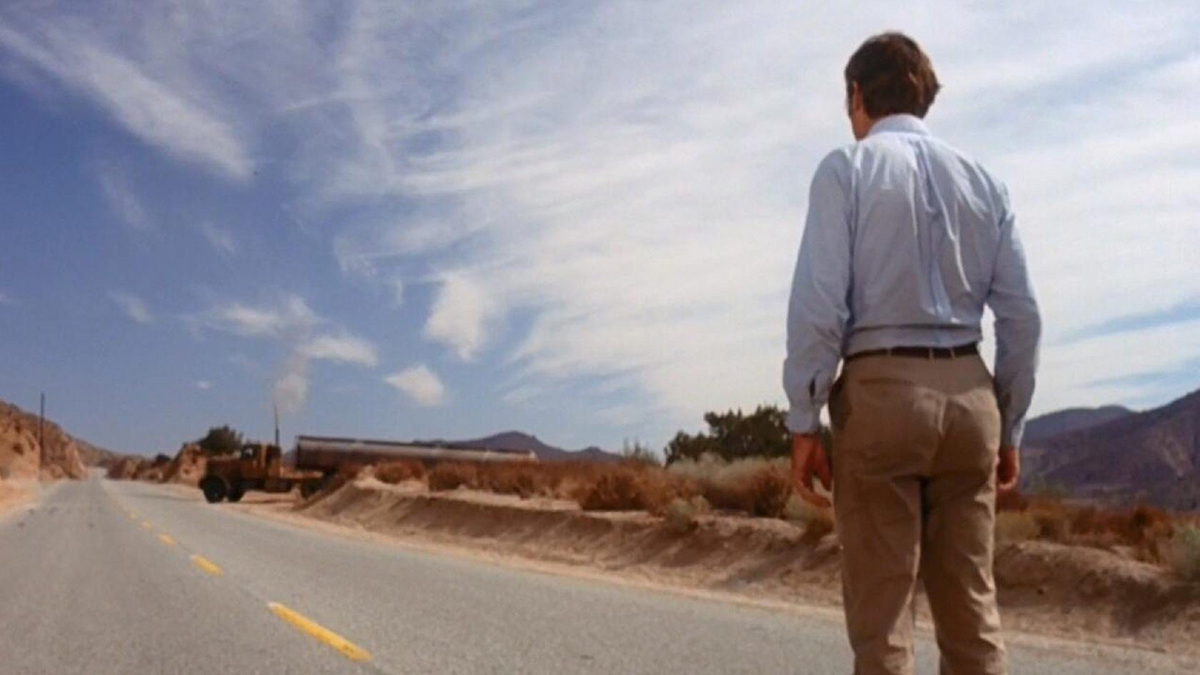 Already cutting his teeth on TV with, for example, episodes of classic detective drama ‘Columbo’, this 1971 movie was the first feature-length outing in the illustrious career of Steven Spielberg. ‘Duel’ was originally aired as a TV movie, but it later secured a limited theatrical release. The low-budget psychological thriller is now a cult classic, and this edition by Fabulous Films sees it released in glorious high-definition.

The screenplay is based on a short story by Richard Matheson (‘I Am Legend’). Businessman David Mann is travelling out of town to meet a client. He stops part way for gas, and to phone home, reassuring his wife that he won’t be late. He’s a touch irritable. There’s a 40-ton-truck up ahead, and he overtakes it, aiming to speed off down the long, winding roads that cut through the Californian desert. It’s a trivial incident, or so he thinks. Before long, Mann can’t shake off the truck no matter which route he takes, and it seems the psychotic driver will stop at nothing less than his destruction. A dangerous game of cat and mouse ensues on the highways.

There are very few actors in the film, and almost all of them are incidental. Even the truck driver famously remains an enigma. Only his cowboy boots distinguish him as he steps out of the truck at the diner. We spend so much of the film with David Mann that we can trace every moment of his increasing paranoia and terror, before he is scared right through to being driven purely by survival instincts. Duel is an intense study of one man confronting his own brush with extinction. It is a psychological thriller that is unremitting in the building up of tension and suspense. Some of the best-known sequences owe a lot both to the western genre (the image of Mann standing off against the truck is like something out of ‘High Noon’, and was later repurposed by ‘Breaking Bad’) and to the unsurpassed work of Alfred Hitchcock – the master of cinematic suspense.

The actor Spielberg chose to bring to life the tormented and increasingly desperate David Mann was Dennis Weaver, on account that the director had loved his performance as the neurotic motel clerk in Orson Welles’ 1958 movie ‘Touch of Evil’. A close study of Weaver’s performance justifies the casting. He teases out strands of mania that are needed to believe Mann could truly escape from the encounter with the truck driver with his life. It’s an almost unbearably intense performance at times, but undoubtedly, Spielberg’s instincts were correct: it’s hard to imagine anyone but Dennis Weaver in the part.

The other character in the film is the 1955 Peterbilt 281 truck, which is smeared with grime and has seen better days. Its menacing frontage and huge bulk is the terrifying monster lurking around the corner, in much the same way that, only a handful of summers later, a great white shark would have the same effect in 1975’s ‘Jaws’. Spielberg truly honed his extraordinary gifts of bringing stories so vividly to life on ‘Duel’.

My only criticism of the finished film is that the resolution leaves something to be desired, though it would be to detonate the motherlode of spoilers for the uninitiated to go into details. Suffice it to say, it didn’t bother me so much as a boy when I first saw the movie, recorded off the television by my dad. Revisiting it as an adult, I found it every bit as tense, clever and thrilling as I had all those years earlier. The only bit that didn’t quite work for me was the final showdown, which could have been made into more obvious a trap.

Despite that minor misgiving, ‘Duel’ remains as spellbinding a film as it has ever been. In high-definition it looks stunning. The sun-scorched desert landscape of California is beautifully photographed, often using a wide-angle lens – you can almost feel the heat in David Mann’s little red car blistering down from the sun. Packaged with a sleeve design in iconic movie poster-fashion by Graham Humphrey, this edition of ‘Duel’ is beautifully presented. Extras on the disc comprise a half-hour documentary about Steven Spielberg’s television work, including ‘Duel’, as well as an archive interview with Spielberg himself about the making of ‘Duel’, and a feature on the late Richard Matheson, who talks about his ideas for the story and how it came to be adapted for the big screen. If you’ve never seen this 1971 classic, ‘Duel’ is highly recommended. It’s stuck vividly with me since childhood…