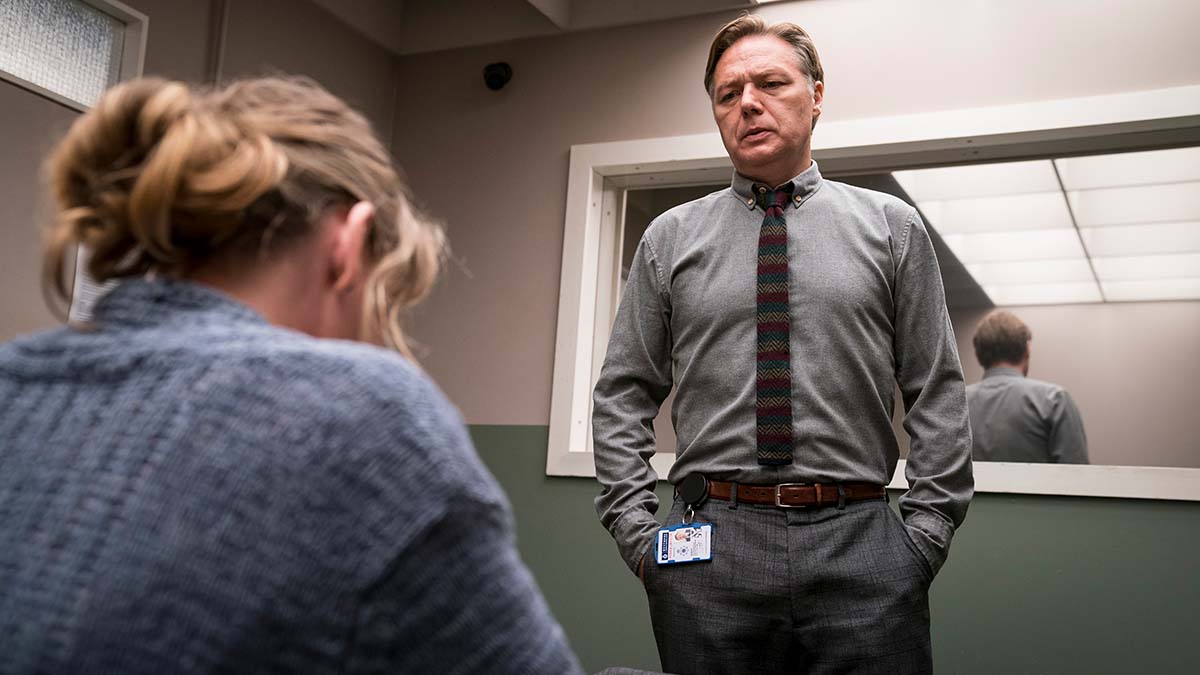 The spotlight moved off Sally and onto Anna (Ellie Rawnsley) on the latest episode of ‘Innocent’.

If you want to avoid spoilers for ‘Innocent’ stop reading now.

Sally arrived at the school for her interview for the supply teacher role and was greeted by a very stern woman, who wasn’t happy she’d applied.

Sam (Jamie Bamber) and Karen (Priyanga Burford) chatted about Sally, and Karen was still concerned about whether or not Sam had actually got closure when he saw Sally.

John (Andrew Tiernan) begged his boss for his job back but stinking of booze, he got turned down and stormed off.

Sally had her interview for the supply teacher job and was asked if the school was the best place for her. She shared her history with the school and her qualifications before telling the panel that she was ‘owed’ the job.

Anna was questioned by Mike (Shaun Dooley) and Suzy (Laura Rollins) about her claim that she saw Sally and Matthew kissing. She was adamant that she had seen it on the date she originally claimed, and was clearly surprised when Mike and Suzy told her she couldn’t have seen it because the path was closed. Anna changed her story and Mike suggested that she’d fabricated the story to deflect from herself. When asked where she was on the day Matthew died, Anna revealed she was at a gig in Leeds with a girl called Melanie.

Following the questioning, Mike and Suzy agreed that they didn’t believe Sally had been inappropriate with Matthew. They also decided to file perjury charges against Anna for lying during the original case.

As Karen dropped Bethany (Amy-Leigh Hickman) at school, she saw Sally leaving the school. Karen rushed into school and confronted Emily (Krissi Bohn), insisting on an emergency meeting of the governors to stop Sally getting the job. Sally meanwhile met with Sam to access a storage locker that contained her belongings. She thanked him for keeping all of her stuff and they laughed when she unwrapped a commemorative Charles and Diana plate. Sam told Sally that it was hard for him to turn his back on her and he admitted he didn’t want to acknowledge the divorce papers. As they talked, Sam said he didn’t want to believe that Sally had murdered Matthew but the rumours and speculation had got to him.

At the station Mike informed the team that Anna had lied and deliberated pointed the finger at an innocent woman before telling them he wanted to know why.

Suzy informed Sally that they’d discovered that Anna had lied and they were going to charge her with perjury. As the two women chatted, Suzy asked if there was any reason why Anna would have lied about her and she apologised that the evidence hadn’t been spotted during the first investigation.

DC Dave Green (Michael Stevenson) questioned John and Maria (Lucy Black) about their relationship with Matthew. He dug into why care services had been called and John admitted he’d thrown his son out after drinking too much. As the questions rolled on, Maria asked Dave not to imply that they played any role in their son’s death.

The governors got together with Emily at the school to discuss Sally. Karen was adamant that Sally had been inappropriate with Matthew but Emily revealed that the police had confirmed that Anna had lied, and that they didn’t believe Sally had done anything wrong.

DC Mia Hollins (Janine Wood) questioned Sam about his whereabouts around the time of Matthew’s murder and she quizzed him about the rumours that were circulating about Sally’s relationship with her student. He denied knowing anything.

Anna pulled a box out from under her bed and we saw a programme for a musical production at the school. On an iPad she watched footage of Matthew reading lines.

Emily visited Sally at Jenny’s home to tell her that she had got the job and to accept Sally’s previous invitation to go for drinks. Processing the news, Sally went for a walk in the woods.

Back at the station Dave brought Mike up to speed on his time with the Taylors and Mike asked him to get access to John’s medical records so they could see how bad his PTSD was. Mike told Mia to confirm Sam’s whereabouts and to dig deeper into whether or not there was tension between Sam and Matthew. Suzy admitted she couldn’t find any trace of Melanie or any connection between Anna and Sally.

After Sally got hired, Karen and Sam rowed first about Sally and then about Bethany’s attitude towards Sam. Sam apologised and embraced Karen, and reassured her once again that she had nothing to worry about.

Sally looked through some old files and found notes that confirmed she had rejected Anna for a role in the school musical. Anna meanwhile was at Matthew’s grave and interrupted by her boyfriend Mark (Scott Chambers) who asked about her relationship with Matthew. Anna burst into tears and deflected, then Mark tried to convince her to have sex with him. Anna refused but Mark pulled her top down and saw she had ‘Matty’ carved across her chest.

Mike found out that John Taylor was infertile and that Matthew couldn’t have been his biological son. He brought Maria in for questioning and asked if John knew Matthew wasn’t his son. Maria admitted that he did know and she told Mike that Matthew’s father was a one-night stand in Blackpool.

Meanwhile, Dave interviewed John to try and find out if the biological father had played any role in Matthew’s life, something John denied.

Mike tried to crack Maria and shared his theory that either John or Matthew’s real father had hurt him. Maria tried to hold it together while Dave suggested that John had hurt Matthew. Mike continued to pressure Maria to try and find out the identity of Matthew’s father but she refused to budge.

Karen confronted Emily at the school about Sally’s hiring and Emily stood her ground, much to Karen’s annoyance.

Sally had her class interrupted by two students who were laughing at a video of a half-naked woman dancing with Sally’s head on. Sally took the phone of them and made one of the boys read out a passage from the book they were discussing.

Sally ran into Karen at school. She tried to speak to Karen and was ignored so she pursued her. The exchange was intense and Karen accused her of having no decency.

Mark told Suzy about what he’d seen on Anna’s chest and Suzy went round to Anna’s house with a warrant to search the premises. She found some photos and called Mike back to the office.

Mike visited Sally at school and they talked about an incident with Matthew where he scratched her face after a row. Sally then told Mike that she felt sympathy for his loss after learning he’d lost his wife and daughter.

At the Taylors, John warned Maria that the police would find out who Matthew’s father was and then everyone would know what she’d done.

Anna was back at the station for questioning and Mike revealed that he knew she’d been rejected for a role in the school play when Matthew had the lead. Mike then told Anna he knew she’d carved Matthew’s name into her chest and Suzy presented Anna with photos that proved Anna had been in a relationship with Matthew. Mike suggested that Anna was obsessed with Matthew but that he wasn’t interested in her. Suzy pulled out Anna’s phone records that showed Anna had contacted him relentlessly and he stopped replying.

Anna continued to claim that Sally and Matthew were having an affair and when Mike said she had been spying on him, Anna lost her cool and shouted that she and Matthew were meant to be together. Mike told Anna that she’d never truly believed Sally was having a relationship with Matthew but lied about her anyway.

Karen and Sam’s relationship continued to fracture over Sally and Sam revealed that Sally had lost his child while she was on trial. Karen realised Sam knew that information when they’d been having sex on the stairs, and stormed out of the room.

Sally spent time looking through old photos of her and Sam and in the background of one of them, she spotted Karen looking at him.

As Mike was ready to leave for the day, Mia stopped him and told him that they’d found Melanie who confirmed Anna’s story about being at a concert in Leeds.

Bethany found Karen in bed crying following her row with Sam. She asked if things would be OK and Karen reassured her.

John spent the evening drinking and when Maria came to get him, he got aggressive towards her believing the whole town would find out she’d been unfaithful.

Sally stopped by Sam’s house to give him a Blackpool keyring she’d found in her things that she’d bought for him on their first date. She asked him not to throw away the past before leaving. Sam looked at the keyring and hid it in a drawer. Karen asked who was at the door and Sam lied.

John headed to the pub and beat up a man. He smashed a bottle and wielded it at his victim before leaving.

Sally opened a bottle of wine and as she closed the fridge, she found Karen stood there. Karen warned her to stay away from Sam and returned the keyring Sally had given him. Sally accused Karen of being obsessed with Sam and she got a slap from her. Karen threatened to destroy Sally if she came near her family again.