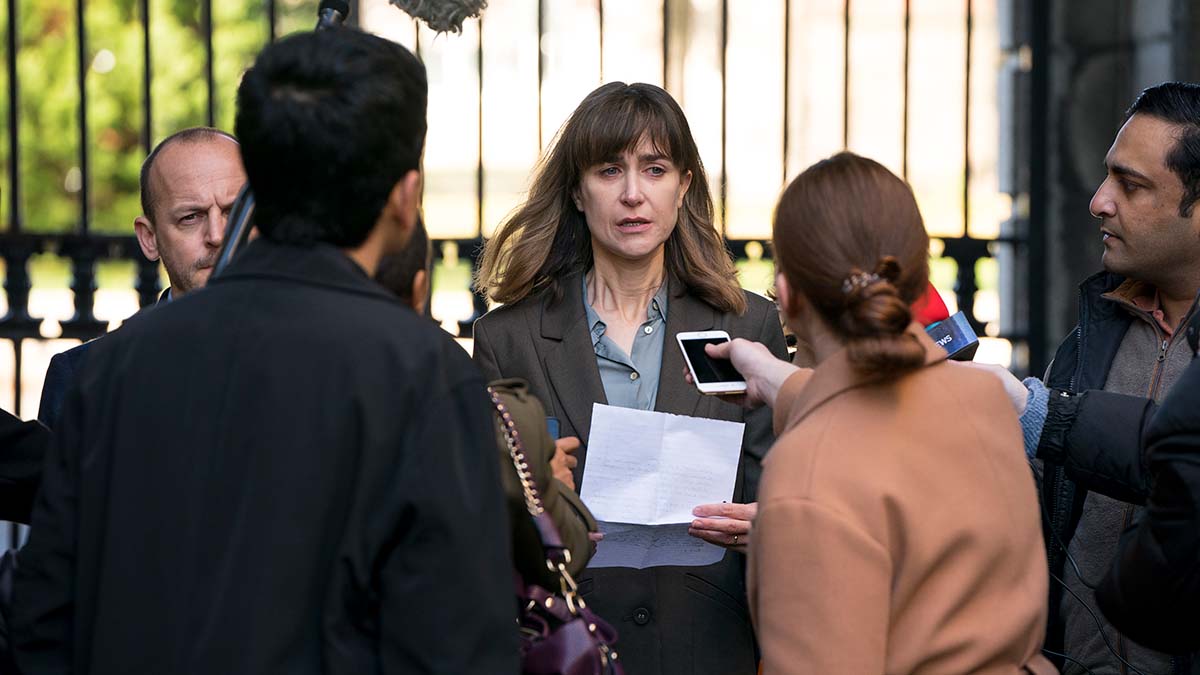 The case of Matthew Taylor, a 16-year-old school boy, who was brutally murdered in the Lake District opened tonight on ITV on the new series of ‘Innocent‘.

If you want to avoid spoilers for ‘Innocent’ stop reading now.

The episode opened with Sally Wright (Katherine Kelly) in a cell worrying as a jury deliberated her fate. She was told a verdict had been reached and was led into the court room to hear it. As the judge asked everyone to rise, Sally looked emotional and worried, and the forewoman of the jury was asked to give their verdict, which was ‘not guilty’. There was an audible gasp in the courtroom and John Taylor (Andrew Tiernan) stood up and shouted ‘no’ in disbelief.

Sally was released from prison and spoke to the press outside the court where she told them she wouldn’t be answering questions and asked for privacy. She spoke of having five years of her life taken away and she urged that true justice would be sought to find his real killer. Matthew’s parents shouted at Sally as one journalist asked if Sally had slept with Matthew and she angrily denied it.

Supt Denham (Poppy Miller) was explaining the evidence that proved Sally’s innocence to DCI Mike Braithwaite (Shaun Dooley) and showed him a photo that confirmed she wasn’t able to have to murdered Matthew as she was elsewhere. It was also established that Mike had just returned to work.

Sally caught up with her friend Jenny (Nadia Albina) during the car ride home and was shocked to discover who her ex was marrying while she was in prison. Meanwhile Sally’s ex Sam (Jamie Bamber) called his fiancée Karen (Priyanga Burford) to reassure her before meeting with a woman whose case he was handling.

During her ride home, Sally asked Jenny to pull over so she could enjoy some fresh air.

The Taylors returned home to press outside their home wanting a reaction to the release of Sally. They ignored the press and rushed into their house.

Sally and Jenny continued their drive and joked about when Jenny copied Sally’s answers during a GCSE exam. They had to slow down to let some people cross the street, who glared at Sally as they walked on by.

At the Taylors, John aired his anger to his wife Maria (Lucy Black) , who urged her husband to tell the police nothing if they asked more questions.

Sam and Karen had a tense discussion about Sally being released. Karen wasn’t happy to find out that Sally was coming back to the town and seemed concerned that it may threaten her impending marriage to Sam. Sam assured Karen that his marriage was over and whether Sally was innocent or guilty, it didn’t change anything between them.

Sally was shown to her room at Jenny’s house. She promised her friend she would only by there for a few nights and Jenny asked if Sally was planning to stay in Keswick. Sally told her that she wanted everything back that was stolen from her.

The next day Jenny told Sally that she was going to get her added to her car insurance and that the police officer in charge of the new investigation wanted to speak to her. As Jenny went to leave, Sally asked where Sam was living now.

Mike reviewed all of the evidence of the case at home and John went to visit his son’s grave. At the office Mike took his team through all the evidence of the case and explained there were holes in the original narrative the police had pursued. He mentioned Anna Stamp (Ellie Rawnsley) who had claimed she saw Sally and Matthew kissing. The team suggested that they needed to reinvestigate the parents and Sam. Suzy (Laura Rollins) thought that the idea of a teacher and student kissing in public seemed unlikely given the illegal nature of such a relationship. Mike focussed the team on the murder weapon, a bottle that was never found.

Sally went into a bank to sort out her accounts and the cashier was very rude to her, calling her ‘a filthy whore’.

At his job John was told by his building site foreman that he needed to redo a wall he built but John reacted angrily and stormed off.

Karen was called into school about her daughter Bethany (Amy-Leigh Hickman), who had been bullying other pupils.

Sally got the bus to the care home where her mother was living. Before she saw her mother, Sally had a chat with Debbie (Rosalyn Wright), who ran the home, and was told that the responses she thought she was getting from her mother, were actually from her mother’s boyfriend. Sally’s mother had worsening dementia and was unable to speak, and Debbie also believed she had no idea she had a daughter.

Sally sat with her mother, who stared blankly at her. Desperate for her mother to recognise her, Sally persisted but there was no recognition in her mother’s eyes. After the visit, Sally went to the water and cleared her thoughts.

Mike met with Sally in a pub and he apologised that the police had let her down by allowing her to go to prison. He explained that they needed her help to find the real killer and he asked if she would be willing to help them. Sally spoke glowingly of Matthew and agreed to help but pointed out that she’d lost a lot and needed assurance that he would help to fully clear her name. She asked him to find out why Anna had lied about her.

Karen tried to find out why Bethany had been bullying other students but her daughter refused to speak. When Sam tried to intervene, Bethany and Karen reacted badly.

Sally bumped into Anna who threatened to call the police. Initially shocked to see Sally, Anna quickly found her fight and warned Sally she had more information she could tell the police.

In bed at Jenny’s, Sally tried to call Sam but it went straight to voicemail. She hung up rather than leave a message.

At the Taylor’s Maria discovered John on the sofa and found out he’d walked out of another job.

Mike went to Anna’s place of work to talk to her and she stuck to her original story. When Mike questioned Anna’s relationship with Sally, Anna lied and told him Sally had threatened to smother her.

Sally went to the school she used to work at and met with her old friend Emily (Krissi Bohn), who was now the head of the school. Emily wasn’t pleased to see Sally at the school and turned down her offer of a drink. Sally then asked for her job back, which Emily said ‘no’ to and accused her of sleeping with Matthew. Angry, Sally told her that she was going to sue for wrongful dismissal if she didn’t get her job back.

Sally drove past Karen and Bethany, and the two women exchanged angry looks. Mike went to the woods where Matthew was murdered and found that the path was closed due to tree pollarding. He called his team and asked them to find out if the trees are pollarded at the same time every year.

Karen called Sam to tell him that she’d seen Sally and suggested that he reach out to Sally to get closure.

Mike’s next stop was to see Emily who told him that Sally was very angry when she’d seen her. They talked about Anna and Emily called her a bit ‘bland’. Mike listed off the friends that Anna said she’d told about seeing Sally and Matthew. When he mentioned someone called Izzy, Emily was surprised and told Mike that they were never friends. It then dawned on Emily that Anna could have lied.

Sam went to see Sally and they met outside of the house. Sally asked him why he was there and he told her that he was sorry for not believing her.

Mike got the information he wanted about the tree pollarding and it looked like the information rang a bell in his head. He called Anna and told her she needed to be interviewed under caution the next day and that she had the right to bring a lawyer.

Sam and Sally shared an uncomfortable silence before Sally told him that she was never unfaithful to him, and it hurt her to think he thought she could do that. She then revealed she had a miscarriage before the trial. Sally said she couldn’t accept him thinking that she had betrayed him. A clearly shaken Sam reached across the table and took her hand.

At home, Mike watched a video of his daughter and cried.

Sam returned home to an anxious Karen who wanted to know what had happened with Sally. He told her that everything was fine and Karen tried to initiate sex. Sam led Karen up the stairs but she pushed him over and they had sex there and then.

Sally found an old picture in a book and stared out the window, unaware that she was being watched by John.