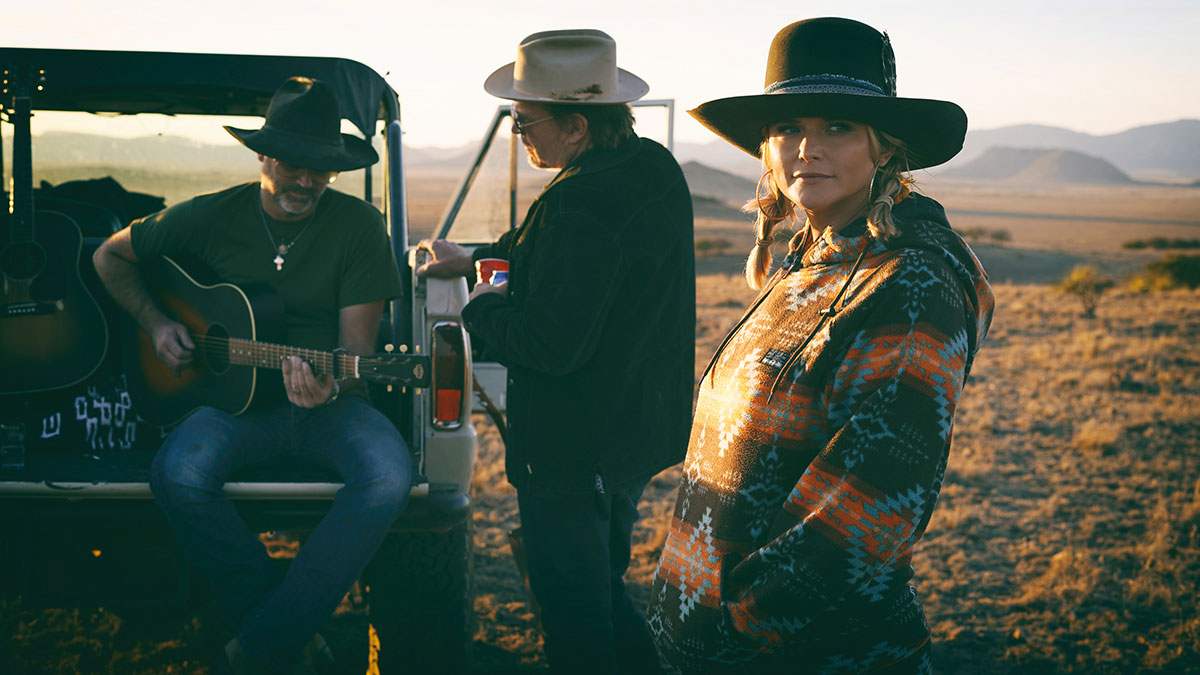 Jack Ingram and Jon Randall may be names that the average Country fan isn’t familiar with but you’ll certainly have heard their work. While both artists have released solo material, they are perhaps best-known for the songwriting they’ve done with Country superstar Miranda Lambert on her songs ‘Tin Man’ and ‘Tequila Does’. The songwriting trio have teamed up for a unique project, ‘The Marfa Tapes’, a collection of songs recorded live in the outdoors in the small town of Marfa, Texas. The album gives fans an insight into the raw process of songwriting and putting songs together, as well as showcasing the undeniable bond and chemistry that the three artists have.

Prior to the album’s release, fans have had a couple of tracks to enjoy including opener ‘In His Arms’. That song alone is enough to set the tone for this record. Unfiltered, raw and free from production wizardry, all of the songs were recorded with just acoustic guitars, vocals and microphones (mostly) outside around a campfire. You can hear the crackle of the fire as ‘In His Arms’ opens and you realise at that moment, you’re actually about to witness something truly special. It’s not often fans get to hear songs in their rawest forms, even acoustic segments on tours are carefully orchestrated, but here we hear everything – blemishes and all.

Of course, most people who will be drawn to this will be Lambert fans and they’ve never heard her in this way before. Expressing self-doubt between songs, fluffing the occasional line or guitar part, and cheering on her fellow artists, Lambert exudes a warmth that’s she often been accused of lacking on stage. You only need to listen to the version of ‘Tin Man’ here, which was a popular track on her ‘The Weight of These Wings’ double album, to see that away from the polish and shine of Nashville, Lambert is most definitely the real deal. That song had a life of its own, without Lambert’s intention to make it a hit, and it remains one of her finest.

The other Lambert album cut on here is ‘Tequila Does’, which appeared on her most recent album ‘Wildcard’. Stripped of the production it had in its finished version, it’s actually a stronger track and with Ingram and Randall providing support on the vocals (and Lambert giggling as she messes up ahead of the second verse), there’s something hugely endearing about it. That endearment runs through the whole record as you feel the energy between the three artists as they chat between songs and cheer lead for each other.

It’s not just Lambert that gets to shine on this record though. Randall takes the lead on one of the album’s highlights ‘Breaking a Heart’, a delicate ballad that comes into its own when the trio harmonise over lyrics of heartbreak. On ‘We’ll Always Have The Blues’, Ingram takes the lead allowing his well-weathered voice to bring a new flavour to the dynamic between the trio.

The album’s finest moment for me is the gorgeous ‘Ghost’. Hitting you in the same feels that ‘Tin Man’ manages to, ‘Ghost’ is a tale of forcing yourself to get over the breakdown of a relationship. Lambert’s vocals are packed with emotion and that quiver she has in her vibrato is simply stunning. Randall and Ingram support with backing vocals and it’s truly a moment of magic.

Elsewhere on the record ‘Homegrown Tomatoes’ is a fun, uptempo moment as the trio cover Guy Clark, ‘Am I Right or Amarillo’ is pure traditional Country, and ‘Geraldene’ is a moody blues-inflected Country song that finds Lambert warning the titular character that she isn’t going to be a ‘Jolene’ and steal her man.

‘The Marfa Tapes’ is truly a fascinating collection. Hearing the beginnings of these songs, all of which could easily be polished up and included on albums in the future, feels like a real treat. Would this album have happened if not for the pandemic? Probably not but I’m so glad that this trio got together to record this. ‘The Marfa Tapes’ is an album that fans of lyrics and good traditional Country music should seek out and celebrate.