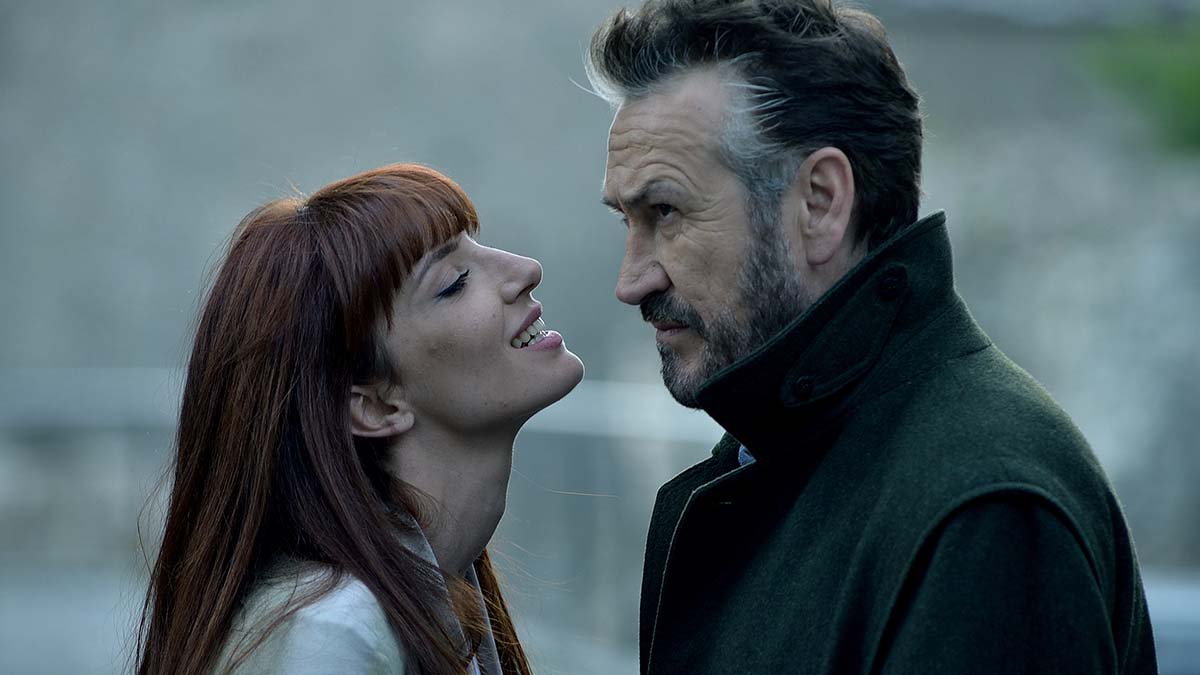 Rocco Schiavone is a Rome cop who has found himself in the idyllic but frozen town of Aosta – a real town in the Italian Alps, mid-way between Turin and Geneva in Switzerland, and only about 20km from both Mont Blanc and Matterhorn. He’s a chain-smoking, 50+, old-school cop who dismisses the sensible skiwear worn by the locals for his stylish – but totally impractical – fine Italian wardrobe.

He’s also a lady’s man. In the first double-episode, we see him with his lover and, later, his wife. But at the end of the second of the two episodes, we discover something about Rocco that explains that aspect of his life – it’s a revelation I certainly didn’t see coming. I love it when TV delivers surprises like that, that truly make you smile in appreciation.

However, at first glance, this looks like nothing more than ‘Montelbano’ on ice. But that’s very unfair on ‘Ice Cold Murders’, because it is much more than a mere copy. Sure, there are a number of parallels – the lead characters are of a similar age, they both work in a police station full of clowns and sycophants, and even the layout of both men’s offices are virtually identical. But their characters are as different as the Italian Alps and the Sicilian coastline.

Rocco Schiavone is played by Antonio Manzini – a veteran actor who is well-known in Italy, where he’s won numerous awards over the years. He’s brilliant as the gruff but kind detective – a man who is handy with his fists one minute (that temper is the reason he finds himself exiled from his beloved Rome), but then extraordinarily caring towards a truck full of victims of human trafficking. His character is completely credible, and despite his apparent philandering, someone you find yourself really rooting for.

The first two-part story concerns the death of a man on a ski-slope, where his body is inadvertently butchered by a huge machine that flattens the snow. Suspicion falls on a variety of characters, including a ski-instructor and love-rival, and the victim’s wife. In the end, the whodunnit element is nicely satisfying and the final reveal well-worked. Indeed, the nature of the show shifts slightly towards the end, as it becomes darker and less comical than the more Montelbano-like beginning.

The stories seem to be based on novels by Manzini himself, and as is so often the case, that makes for genuinely well-rounded characters and intriguing plots. And having each story told over two episodes allows the viewer time to get to know and invest in the personalities of each character.

Some might say that Schiavone is a bad-tempered, foul-mouthed, chain-smoking neanderthal. But his kind heart – and his rather sad and disillusioned persona – makes for compelling viewing.

This is Walter Presents at its very best. A wonderful show that I’m really looking forward to gorging via All4.

Walter Presents: ‘Ice Cold Murders: Rocco Schiavone’ airs weekly on More 4 from 30th April and is available now on Walter Presents via All 4.