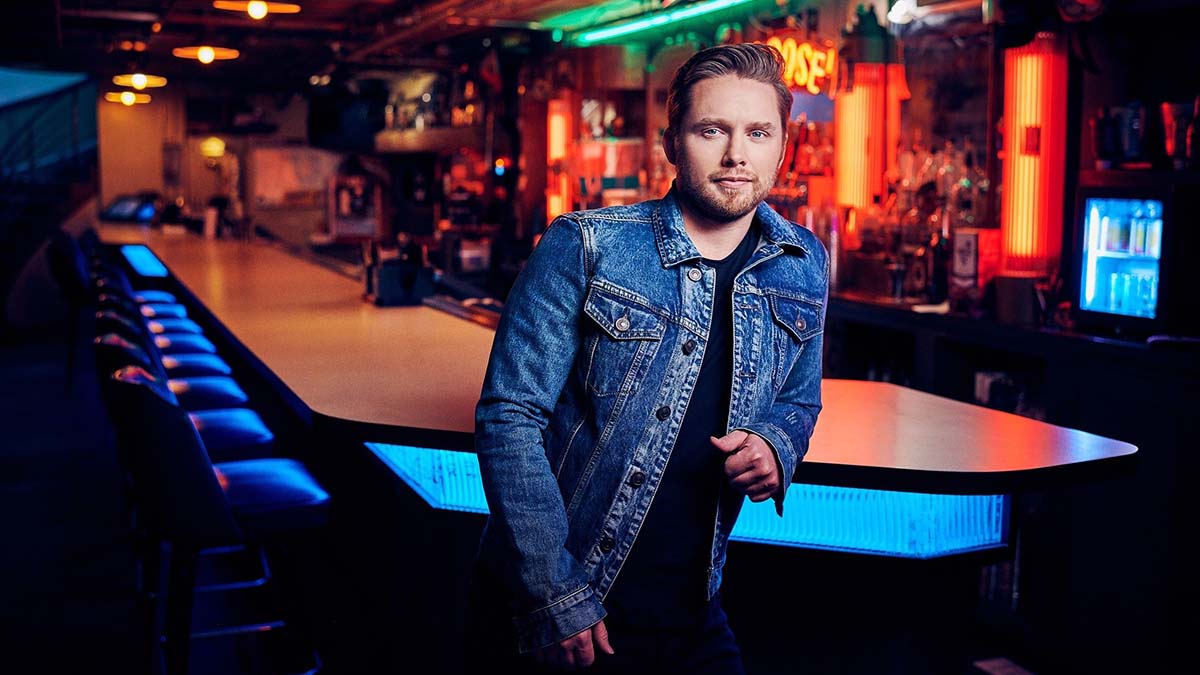 Jameson Rodgers enjoyed a huge breakthrough with his Platinum number one hit ‘Some Girls’ in 2020.

The follow-up, ‘Cold Beer Calling My Name’ is quickly climbing the charts and it features Country juggernaut Luke Combs, whom Rodgers has toured with. Last Friday, Rodgers released his EP ‘In It For The Money‘ and he looks to set to be the next big star of the Country music genre.

I spoke to Jameson about the EP release, to discuss the huge success of ‘Some Girls’ and to find out about his plans to come to the UK…

How does it feel to have this EP out there in the world?

It’s great. I’ve been sitting on the majority of these songs for a while. You have to wait until the time is right to put some new songs out. This is my first release with Sony as the label behind me.

The EP is so strong and I am a big fan of it but I have to take issue with ‘Good Dogs’ as I can’t get through that song without crying. Was that inspired by a personal experience?

Yeah. You take bits and pieces of truth in every song. I rent this cabin out east of Nashville every January, the first week back from Christmas, and I take some of my favourite writers. We go up there and write songs for a week or so. I’ve done it the last three years. ‘Good Dogs’ came from the cabin one weekend and my buddy Hunter Phelps had just gotten a new dog. He’d gotten a new German Shepherd and he had written the title down ‘Good Dogs’. He threw it out there and we just got to talking about how you’d rather spend time with a dog than you would people (laughs). We were not sober and we were definitely, I don’t know how to put this, it was an emotional write I’ll say that. I was thinking about dogs I grew up with. I don’t have a dog at the moment just because of how it is for a new artist. I’m never at home so it would be really unfair to a dog right now. We were just talking about how dogs just don’t get to spend as much time here on earth. It was a very difficult song to get through. I think we had to take a break like every 30 minutes (laughs).

I’m a huge dog lover and I have a dog, so that song just hits me in all the right places and it makes me cry…

Well, I’m sorry. I’m sorry made you cry on that one (laughs).

This EP, for me, positions as you as the next big breakout artist in Country music because there’s so much variety on there and your vocals are strong. It must feel good to be getting such great feedback…

Yeah, man, I appreciate you saying that. It’s hard to get out of the headspace for me that I’m just a dude from Batesville, Mississippi that moved to Nashville with a big dream 11 years ago. I’m just thankful to even have a chance to do this. I know how many people would kill to be in my shoes. You try to work hard and try to surround yourself with the right people, and I feel like I’ve done both of those. The stars are kind of aligning, I guess for me in a way so I’m just trying not to try not to mess it all up.

You have Luke Combs on a song so you can’t really go wrong there can you?

Well, you know. He hit me up saying he was struggling financially so I was just throwing him a bone (laughs)

Did that song originate from the two of you going out on tour together?

Yeah it did. When I wrote the song I had no intention of it ever being a duet. I wrote it with my buddies Hunter Phelps, Brett Tyler and Alysa Vanderheym. Honestly, even when I was in the studio cutting it I still had no clue it was gonna be a duet and around the same time that’s when Luke had hit me up. He was like, ‘man, do you want to come out and be first of three on this tour I’m doing and you can come out all year long?’ and I was like, ‘geez, let me check my schedule’ (laughs). I thought it’d be cool to have a feature on my first record and Luke had thrown me a massive bone already. I thought he was probably gonna say no to singing on this song but I texted him anyway, asked him and he hit me back and said, ‘let’s do it. We both like drinking beer. It’s a fun song’. You just never know what the singles are going to be. It’s cool getting to sing with him on the radio.

Oh, man, it’s changed my life. The journey of that song is just unbelievable. The last show we played I played with my band was early last March right before the pandemic hit. ‘Some Girls’ wasn’t even in the top 40 at the time. For a song to survive the pandemic and me stressing all the time that COVID was gonna ruin ‘Some Girls’ (laughs)… that song just had a destiny, I guess. It survived and went all the way and rang the bell. I haven’t even played a show since I’ve had a number one. That’s what I’m looking forward to the most, just seeing how many new fans we have. It’s going to awesome.

It’s such a shame that you’ve missed out on the highs and experiences that come with having a number one. You must be desperate to get back out on the road and perform this song, and celebrate its success…

Yeah, absolutely. I feel like I’ve been so busy with everything but shows here recently. Usually the shows balance everything out. You get to hear the crowd sing it every Thursday, Friday and Saturday, and it’s inspiring and it fills your cup up. Unfortunately, I haven’t had that but we’re gonna make up for some lost times here pretty soon.

How have you adapted to live streams being your primary outlet to play live this past year?

I enjoy it, especially when it first started, I think I was doing it two or three times a week. I think everybody was. It’s not the same as a real show but I was telling somebody if this would have happened in 1995, you would have no way to stay connected with fans and keep people in the loop. It’s a blessing to have the technology we have today with all the social media outlets. It’s been cool. It’s been good to stay on it.

It’s a good point, actually, isn’t it? What would people have done if this had happened in the 90s? Would you have filmed yourself on a camcorder and then mailed the tape to the TV station?

I guess so. I don’t know. It’s weird to think about (laughs)

On the flip side have you had a lot more time to work on your creativity, to write songs and to get a lot of material in the bank?

Oh, God yeah! I was looking the other day. I was counting the songs from when I came off the road early March last year up until this past March, and I think I’d written 110 songs. You pile the songs up and hopefully they get to see the light of day at some point. These songs on the EP, they were written pre-pandemic and they’ve been waiting for their shot to get out there. Now I’ve got so many more new songs that I love. Hopefully, it’ll be a good thing. When we get back on the road, I’m sure it will be busier than I’ve ever been in my life and I probably will not want to write a song for a while (laughs) so it’ll be alright, I’ll just be like, ‘well, I’ve got 100 songs I can pick from for the next album’. It’ll all be worth it, you know?

The speed that people are releasing music these days, those 100 songs should see you through the rest of the year…

The title track on the EP, ‘In It For The Money’, is one of my favourites on here. What’s the story behind that one?

That one’s probably the most personal song I’ve ever put out to be honest with you. It’s literally my story the last 11 years. They call it a 10-year town an I guess I’m hitting that right on the head. I love how that song paints the images of paying your dues here in Nashville. You gotta do what you got to do. It’s not easy. If everybody could do it, they would. I would wake up every day, even if I was just a songwriter or just playing shows, I would literally do it forever for a just getting by salary. It’s just what I love to do. That is what the song is about. Obviously, a new artist isn’t just raking in money, as you can imagine (laughs)

You say that but people genuinely think if you’re putting out music, you’re raking it in…

People in my hometown just think I have a billion dollars in the bank. But it’s far from it. Maybe one day and that’d be nice but I didn’t move the town to be a rich person. It’d be nice but it’s not what it’s really about.

We’re pretty desperate to have you come over to the UK and play some shows here. Is that something on your agenda when it’s possible to tour again?

Oh my god! Absolutely. I’ve never been over there. If y’all will welcome a Mississippi boy over there and sing some songs with me that that would be awesome. That would be mind blowing, to be honest with you. Definitely looking forward to that.

My first show, a real show, is booked for the end of May here in Tennessee. Starting then pretty much every weekend, there’s a show or a few shows booked. It seems like there’s a light at the end of the tunnel as far as live shows coming back. As you can imagine, I’m beyond ready to do that. It’s been way too long. I’m getting married in September so between the shows and the wedding, it’ll be a busy back half of the year for sure.

Jameson Rodgers’ EP ‘In It For The Money’ is out now. Watch the video for ‘Cold Beer Calling My Name’ below:

Advertisement. Scroll to continue reading.
In this article:Featured, Jameson Rodgers