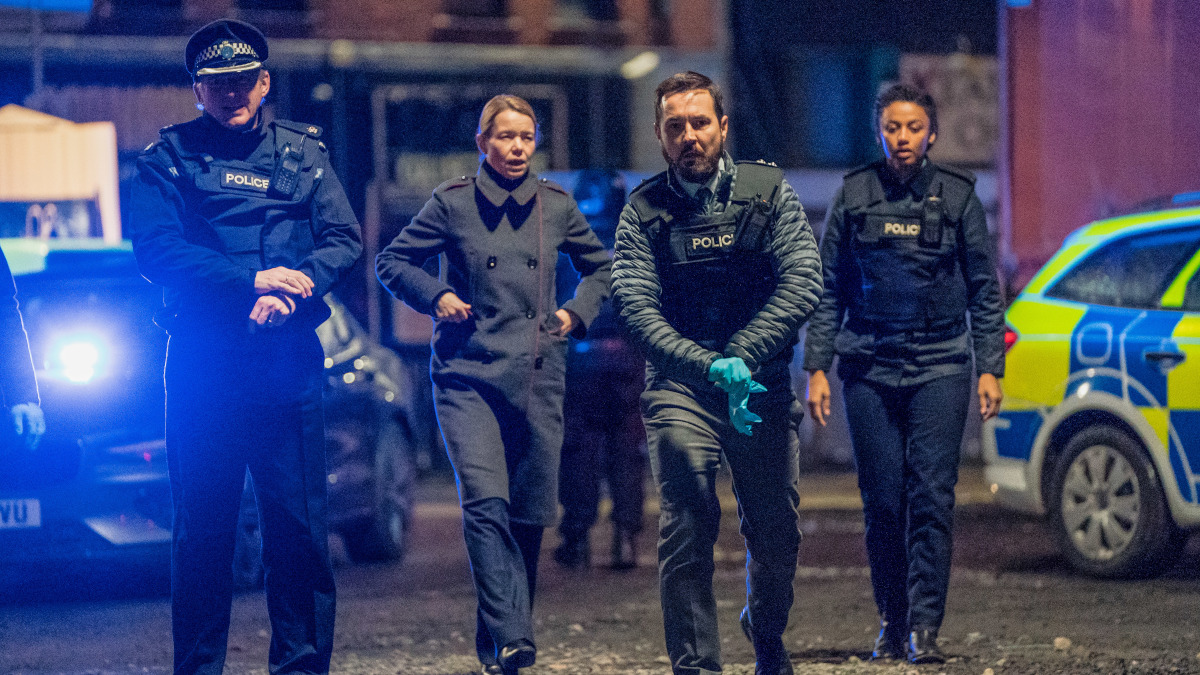 The penultimate episode of Line of Duty series 6 gave us the aftermath of the cliffhanger from episode 5. That left us with Fleming (Vicky McClure) and Pilkington (Gregory Piper) arguing with their weapons drawn while Davidson (Kelly Macdonald) watched helplessly. The episode ended as two shots rang out.

The episode opened up with Arnott (Martin Compston), Bishop (Shalom Brune-Franklin), Hastings (Adrian Dunbar) and Carmichael (Anna Maxwell Martin) arriving on scene with armed backup. They found the lifeless body of Pilkington who had suffered two gunshots to the chest. Surprisingly, Fleming and Davidson had left the scene in Fleming’s service vehicle.

Hastings complained at Carmichael for pulling their surveillance. Fleming’s vehicle was quickly tracked down but both her and Davidson were nowhere to be seen. Arnott said he had no idea where they might be and Carmichael issued an order for the arrest of the pair.

Fleming and Arnott keep a set of keys for each other in case of extreme circumstances. Fleming took Davidson to Arnott’s and the pair spoke. Fleming said Davidson had tried to lure her to be murdered and seemed to think she was going to be framed for shooting Pilkington. Davidson kept apologising and wanted to try and prove she wasn’t bent. She asked for Fleming’s gun and grabbed it so that her fingerprints would be on the weapon that killed Pilkington. They left with Arnott’s car and a burner phone.

Back at AC-12, Carmichael asked Bishop to update the Operation Lighthouse evidence board. She was instructed to remove and shred the portrait of Chief Constable Philip Osborne (Owen Teale). Carmichael took a call in her office and then got ready to leave. Arnott spotted her and alerted Hastings so they could follow.

As Fleming drove, Davidson gave her directions which included passing the home of Gail Vella (Andi Osho). They arrived across the road from Terry Boyle, outside Kingsgate Printing Services. Kate new that the business had previously been used as as front for the OCG. Before more could be revealed, police arrived on scene and a car chase ensued as Fleming tried to flee. She couldn’t work out how the police had tracked her down so fast. Carmichael later revealed that Osborne had ordered trackers to be placed on all AC-12 vehicles.

Fleming pushed hard but the area was swarming with police. They found themselves surrounded by armed police and had no choice but to exit the vehicle. Carmichael, Hastings and Arnott arrived on scene and Fleming was convinced that Arnott had given her up. Davidson gave up her pistol and surrendered but Fleming was reluctant to comply.

Carmichael and Hastings both tried to talk her down. Arnott moved forward to try and diffuse the situation. He promised both he and Hastings didn’t give her up and that he’s get them both to safety. Fleming surrendered her weapon and Arnott walked them in. Fleming told him to check out the print shop and that Pilkington confessed to the murder of Maneet Bindra and John Corbett.

Carmichael decided to lead the interviews with Arnott and Hastings in support. Davidson was brought in first and initially decided to reply “No comment” to all questions. As the team went through the evidence they revealed that Tommy Hunter wasn’t just her uncle, he was also her father. This information appeared to be news to Davidson and she became very upset.

Carmichael wanted to stop the interview but Arnott spoke up and he and Hastings continued. Each time Hastings seemed to be getting somewhere with anything related to police corruption he was shut down by Carmichael. Davidson eventually began to open up about certain topics. She admitted to planting the burner phones at Farida’s, the files in car boot of Buckells (Nigel Boyle) and using the decoy armed robbery to delay the arrest of Carl Banks.

A search of the print shop turned up the IT equipment that was stolen from Gail Vella’s home. Files on those devices proved that Vella was researching the Lawrence Christopher case, the OCG and police corruption. The team put a theory to Davidson of why Vella was murdered but she claimed she knew nothing about it, including the involvement of her cousin Darren Hunter.

Hastings asked if she new the name Marcus Thurwell (James Nesbitt), the SIO (Senior Investigating Officer) who led the Lawrence Christoper investigation. Davidson turned back to her “No comment” answers. The team showed evidence that Thurwell was in Spain, and that the person she’d been communicating with via laptop was also in Spain.

When quizzed about the death of Pilkington, Davidson said that she took the gun from Fleming and shot him. Carmichael didn’t believe her due to the forensic evidence but Davidson was insistent. She also said that she didn’t murder Pilkington but administered lethal force to prevent an imminent threat to life which she was allowed to do as a serving police officer.

Davidson explained that Pilkington was assigned to MIT against her will. She was aware of his OCG connections and that he was there to intimidate her into misleading Operation Lighthouse. She refused to confirm who was giving the orders to Pilkington. Carmichael terminated the interview and charged Davidson with perverting the course of justice and malfeasance in a public office.

Due to Davidson’s confession, Fleming was released. Carmichael made sure that Fleming knew that she didn’t believe Davidson’s version of events surrounding the death of Pilkington.

Arnott and Fleming met up to discuss events. They then attended the forensic search of the print shop. Lomax (Perry Fitzpatrick) walked then through the findings including evidence of the workshopping of firearms. Fleming suggested they bring in GPR (Ground Penetrating Radar) to see if there was anything hidden in the concrete floor.

Spanish police received intel on a possible location for Thurwell and were carrying out a raid. AC-12 watched via video link as the property was raided and two bodies were found inside. Hastings was upset and stormed out saying there was only so much a man could take.

Elsewhere in the episode, Arnott still hasn’t agreed to his drugs test. We’ve seen him ignoring the many reminder emails in recent episodes. He’s now on a final warning and has just 5 days to comply. We haven’t seen him taking anything for a few episodes so maybe he’s hoping to delay as long as possible in order to be clean. Failing to take the test is likely to have serious repercussions.

At the end of the episode, Davidson was taken to prison. As a high profile prisoner she was given a cell with CCTV outside. Watching her be taken in was bent prison officer Alison Merchant (Maria Connolly) who appeared to be making sure Davidson knew she was being watched.