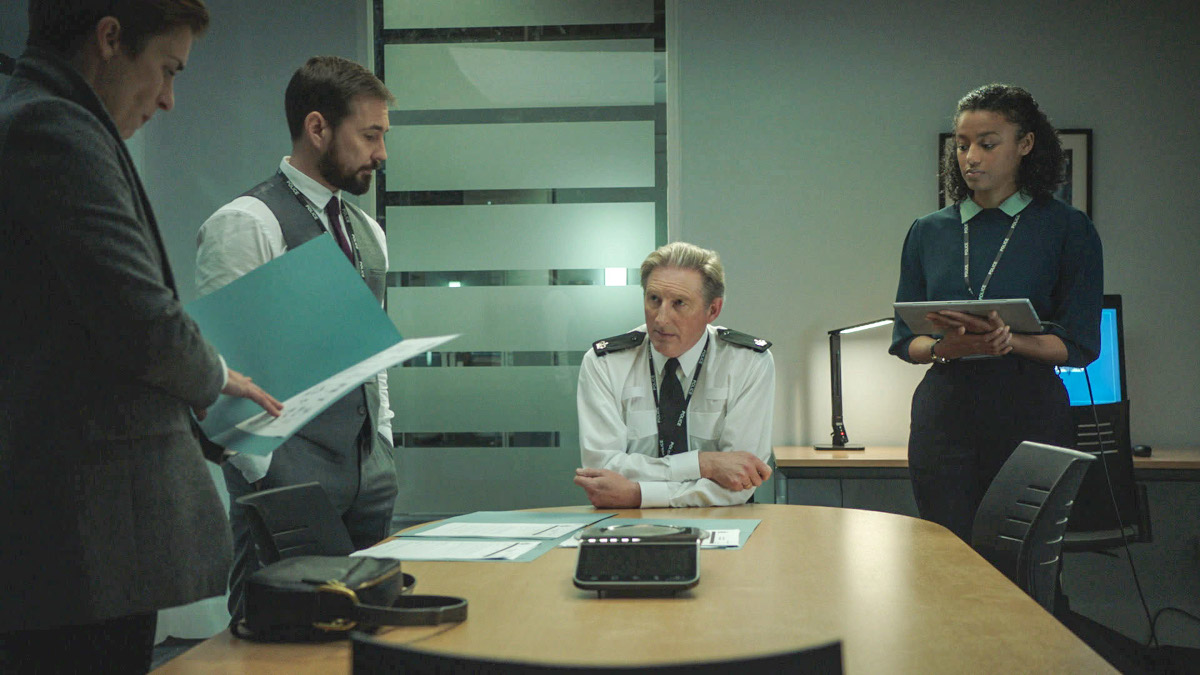 The fifth episode of Line of Duty series 6, saw AC-12 dig into past cases while Fleming (Vicky McClure) hatched a plan to determine if Davidson (Kelly Macdonald) is bent.

The episode opened up with DI Arnott (Martin Compston) and Bishop (Shalom Brune-Franklin) paying a visit to the prison where Jimmy Lakewell (Patrick Baladi) was killed. Apparently he was found hanging by a prison guard running a routine inspection. There was no obvious evidence of foul play as conveniently there was no CCTV outside the cell where he was found.

Arnott explained that Lakewell had given him a lead, that Gail Vella (Andi Osho) was digging into the death in custody of Lawrence Christopher from 2003.

At the Hill, Lomax (Perry Fitzpatrick) briefed Davidson and Fleming about possible links between the bookies robbery and Vella’s murder. Their interview with one of the gang last episode had pointed them towards potential industrial units where the guns were workshopped. Davidson looked worried as Pilkington (Gregory Piper) watched menacingly from his desk outside the room. Fleming wanted a word with Davidson but she said she was too busy.

At AC-12, Bishop updated Hastings (Adrian Dunbar) on the surveillance on Davidson and Pilkington. Arnott and Fleming joined them and Hastings said it was the the safest place for Fleming. He was pleased to see that Fleming had been authorised to carry a concealed firearm. She also revealed that Davidson had become distant with her.

Fleming was surprised to hear that Davidson was under surveillance. The team explained that forensics had detected Davidson’s DNA at Jatri’s (Anneika Rose) home. Also the DNA was a partial match for Tommy Hunter, the OCG (Organised Crime Gang) boss from series 1 & 2.

Back at AC-12 Hastings received his notice of retirement. Bishop told him there was something on the news that he had to see. It was a statement from Chief Constable Philip Osborne (Owen Teale) criticising police meddling. Hastings went to see PCC Sindwhani (Ace Bhatti) and was surprised to hear that he was resigning. Sindwhani explained that he had been fighting the plan to scale back AC-12 and said it was down to Hastings to prove the corruption before he was forced out.

Back at the Hill, Fleming cooked up a plan and gave Arnott a heads up. She had identified the OCG workshop but told Davidson there were three sites. However she only told MIT (Major Investigation Team) of the first site to raid. She also had all team members surrender their mobile phones to prevent leaks and Pilkington looked furious. Fleming was hoping that her plan would prove if Davidson was bent or not as she would be the only one able to leak the information to the OCG.

Fleming ensured that Pilkington rode with her and Davidson. The first location was a decoy that turned up empty. Bishop was running surveillance and snapped Pilkington making a call from a burner phone. Meanwhile Arnott was at site number 2 with Hastings at site number 3. A van soon appeared at site 2 and two men left the vehicle and went inside the workshop. Arnott gave his team authorisation to move in.

The team breached the workshop and shots were soon fired. Arnott and a colleague rushed to the sceen to find both criminals had refused to surrender and had been shot. Medical assistance was called but the pair both died from their injuries. Davidson soon arrived on scene and was furious that AC-12 were on scene and she ordered Arnott to stand down. Davidson recognised one of the dead men as the guy who gave her the new burner phone.

After the operation, Fleming went back to AC-12 and was confident that her plan had proved that Davidson wasn’t bent. Arnott was concerned that she might have stood him down to tamper with the crime scene. Hastings agreed they couldn’t yet be sure. Arnott explained that the time of the call Pilkington made coincided with a call one of the now dead men had received. However, without bringing Pilkington in they couldn’t be 100% sure.

A team was ready to bring Pilkington in but Hastings felt he should be left in play. He said Pilkington was the new Caddy and that he would lead them to the fourth man aka ‘H’. Arnott and Fleming voiced their concerns but they still don’t know that Hastings is being forced out.

Bishop dug into the Lawrence Christopher case to try and find out why Vella was looking into it. Hastings said it was good work but they needed more. Bishop was upset and angry at the way the case was handled at the time. The SIO (Senior Investigating Officer) on the case was DCI Marcus Thurwell (James Nesbitt). His name previously cropped up in series 3 during the Sands View child abuse investigation.

One of the suspects who attacked Christoper was Darren Hunter, son of Tommy Hunter. They speculated that Tommy had put pressure on Thurwell to ensure Darren went free. With Davidson related, they wondered if she was in a similar position and being controlled to tamper with Operation Lighthouse.

Fleming confronted Davidson about they was she was being treated. Davidson was upset at AC-12 getting involved at the workshop. She suggested that Fleming request a transfer back. Fleming respectfully declined and said she was staying.

Bishop also discovered that Thurwell had been working for Patrick Fairbank (George Costigan). He was previously sentenced for his involvement in Sands View. Vella was due to meet with him but was murdered the night before. Arnott and Bishop paid him a visit in prison but his dementia seemed to prevent him remembering. Arnott lost his temper with him.

Davidson had a couple of sessions during the episode on the OCG chatroom. She was told that she wasn’t finished due to AC-12 and that she had to get rid of Fleming. Davidson said she would agree if it was her last job and got the reply ‘Definately’ (complete with spelling mistake, we’ve been here before, is it a clue or a red herring?).

Davidson set things in motion by asking Fleming to meet up outside of work to address her personal issues. Fleming agreed and Davidson said she’s send her the details of where to meet. Davidson went straight to the bathroom and broke down in tears.

Bishop continued her digging into Vella. Arnott came up with a theory that Vella must have been murdered to protect someone involved in the Lawrence Christopher inquiry. He proposed that the person must have influence over the OCG. Bishop had discovered that Ian Buckells (Nigel Boyle) and Osborne were also involved in the case.

Before they could move on this new information, AC-12 was visited by Detective Superintendent Patricia Carmichael (Anna Maxwell Martin). She spoke to Hastings in his office where she revealed she’d be taking his job. She’d also instructed the CPS to drop proceedings against Buckells and suspended surveillance on Davidson, Pilkington and Terry Boyle. She was concerned about the anti-corruption budget.

Elsewhere in the episode, Arnott received forensics back on a £50 note he took from the stash of money he found in Steph Corbett’s (Amy De Bhrún) loft. He discovered that the money was the same batch given to Hastings in series 5.

Arnott wasn’t sure what to make of it, but after a later prison visit with Lee Banks (Alastair Natkiel), he realised that information from Hastings got John Corbett killed. He’d given the money to Steph because he felt guilty.

At the end of the episode, Fleming arrived to meet Davidson but got a call from her saying she wanted to meet somewhere less public. It was revealed that Pilkington was running things and he had Davidson text Fleming an address which turned out to be a lorry park.

Fleming was suspicious so called Arnott to give him an update. He told her about Carmichael and that surveillance was suspended. He told her to pull out. Carmichael interrupted and took the phone from Arnott. She tried to talk to Fleming but she hung up and texted Arnott the address. Arnott told Hastings and the team left the office to rush to Fleming.

Davidson arrived and told Fleming that she was sorry. Fleming asked what was going on but Pilkington got out of Davidson’s car with a gun. He explained that Davidson had tried to give Fleming a way out. Fleming kept him talking and tried to get him to stand down.

She explained that Pilkington and Davidson were both under surveillance. Pilkington started to turn on Davidson and fired a shot toward her as she tried to walk away saying she’d done her bit. This gave Fleming enough time to draw her concealed weapon. She and Pilkington took aim at each other and argued. The episode ended as Davidson screamed and two shots rang out. We’ll have to wait to next episode to see who fired and who, if anyone, survived. Eek!