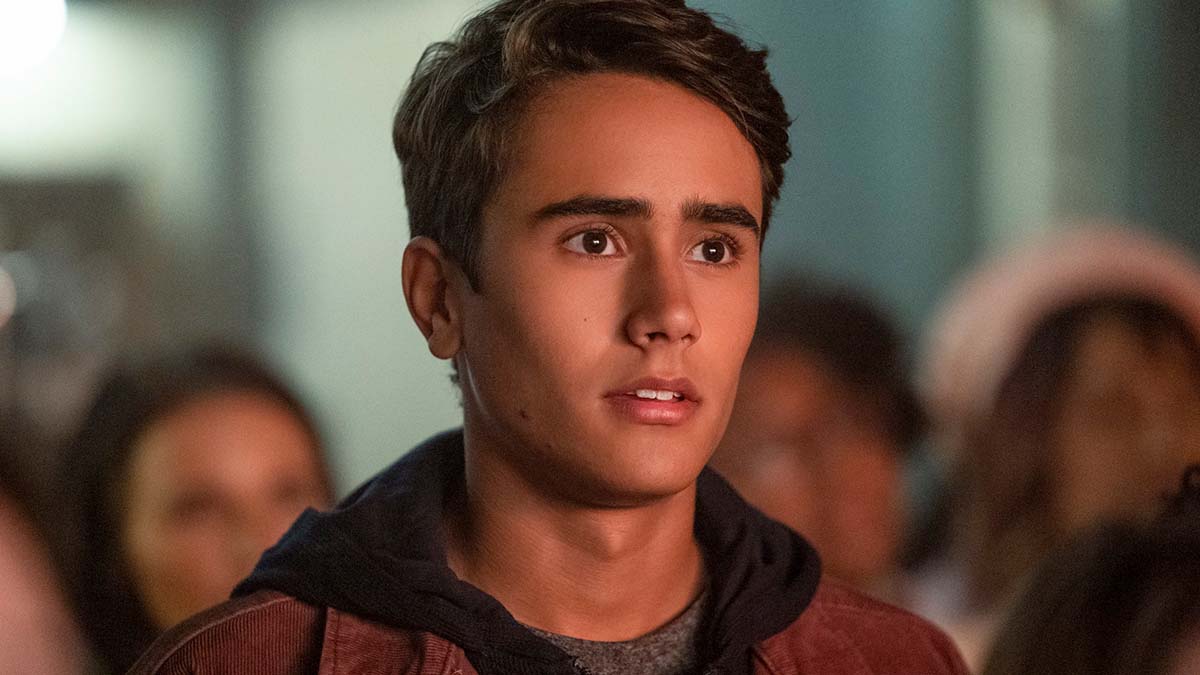 Coming to terms with your sexuality as an adolescent isn’t easy for anyone, regardless of the support system you have around you. Coming out can result in a negative outcome, with many young LGBTQ+ people becoming estranged from or even shunned by their family. For Victor Salazar (Michael Cimino), a teenager from a Latino family that has moved from Texas to Atlanta, coming out is unthinkable thanks to the culture he’s grown up in.

The central character from the Hulu series ‘Love, Victor’, which is available to stream here in the UK on Disney+, finds his feet in the first season as he adapts to life at his new school, Creekwood High, all the while battling with his burgeoning feelings for openly gay classmate Benji (George Sear) and trying to convince himself that he’s actually straight by dating popular girl Mia (Rachel Hilson).

A spin-off from the hit 2018 film ‘Love, Simon’, ‘Love Victor’ keeps Simon Spier (Nick Robinson) around, even if it’s mostly in voiceovers as we hear the messages he’s sending to Victor, but the focus is very much on Victor, a kid who couldn’t be more different to Simon. The show really does explore what it’s like for a teenager like Victor, whose family is struggling financially to make ends meet and dealing with their own internal conflicts, as he comes to terms with his burgeoning sexuality and the pressures he feels as a Latino who has been brought up in a religious household.

As a 38-year-old gay man, I decided to dive into ‘Love, Victor’ as I’d enjoyed ‘Love, Simon’ and I fully expected the show to be one I’d enjoy but that wouldn’t particularly resonate with me due to my age. How wrong I was. Over the course of the 10 episodes I laughed, cried and felt all of the feelings, right there along with Victor. The show is one I can’t recommend highly enough, especially if you, like me, were once a teenager struggling to come out.

I was a teenager in the 90s and the only TV series that showed any representation for gay youths, like myself, was ‘Dawson’s Creek’. The season 2 episode ‘…That Is The Question’ saw Jack McPhee (Kerr Smith) come out to his sister Andie (Meredith Monroe) and, in a very emotional scene, his disapproving father. Prior to that episode Jack had dated Joey Potter (Katie Holmes) as he tried to suppress his true feelings. I recall watching that episode in my bedroom at home when I was 16 years old. Smith’s performance was so powerful and it resonated deeply with me, as I was a closeted gay teen. The idea of coming out to anyone was terrifying and I believed that doing so would alienate me from my friends and family.

At the time I was being badly bullied at school, something I never shared with my family and I don’t know if they ever knew. From as early as I can remember, the majority of my friends were female. I’ve always felt more comfortable in the company of women than men, and this seemed to be more of a problem for everyone else than it ever was for me. As a teenager, boys just weren’t interested in being my friend. I didn’t like football, I had no interest in girls and you’d more likely find me obsessively listening to the Spice Girls than the emo-rock that ‘real boys’ listened to at the time.

Being ‘different’ meant I was subjected to years of name-calling and bullying. It was never physically abusive, and for that I’ll be forever grateful, but not a single day would pass without someone feeling the need to throw a comment my way. I was called ‘gay’ by boys (and a handful of girls) I didn’t even know from the age of 12 and it continued right through to university. There were times I purposely avoided getting the bus home after school because I’d have to endure being verbally abused. I remember walking the near hour journey home, just to avoid being picked on, more times than I’d care to admit.

The bullying truly was relentless. It would happen in front of teachers who sat by and did nothing. It would happen in front of my friends who would be too frightened to speak up on my behalf, and sometimes they even just distanced themselves from me to avoid becoming targets themselves. What’s interesting all these years on are that some of those boys who bullied me have gone on to come out themselves and a fair few of the bullies have added me as a friend on Facebook . None of them has ever apologised for the way they treated me.

While there isn’t a strong storyline about bullying in ‘Love, Victor’, the attitude of popular jock Andrew (Mason Gooding) towards Victor was enough to bring back plenty of those memories. What people don’t understand about the bullying, is it stays with you forever. All these years on, I’m self-conscious when in crowded places and forever wondering if I’m being ‘too gay’ without realising it. I won’t hold my husband’s hand in public as I’m too afraid of negative attention. Because I was forced to know what people thought of me from a young age, I’ve spent too long in my life being worried about the opinion of others.

I recall coming out to a friend and his girlfriend when I was in sixth form. We were two very different people and you’d never have imagined we’d get on but in many ways he became my Felix (Anthony Turpel), Victor’s best friend in ‘Love, Victor’. For whatever reason, he didn’t listen to what other people said about me and made his own mind up by getting to know me. His friendship stopped a lot of the bullying as people were too terrified to get on his bad side. It was like I had some protection and reprieve, and I’ll be forever grateful to him. He once took my hand in a nightclub on New Year’s Eve and asked me to dance with him, not because there was any romantic feeling there – there definitely wasn’t – but he wanted to show me that he didn’t care about my sexuality.

With the exception of my one friend at sixth form who truly accepted me for who I was, I dealt with being gay alone. I didn’t confide in my family, I didn’t really talk about it with my friendship circle and keeping that secret very nearly destroyed me. Even after being honest with my friend, I did a ‘Victor’ and continued to feign interest in girls. I remember someone saying to me one night that they thought I was a great person… as long as I wasn’t gay. If I had a pound for every time I heard that between the ages of 16 and 21 I’d be a rich person.

My experience, and trust me I could go into a lot more detail, has made me so grateful that this generation has a show like ‘Love, Victor’ that shows positive representation for gay youths. I wish I’d had a show like it growing up as it would have made me feel a hell of a lot less alone. Gay role models were pretty much non-existent in the 90s and I’m so pleased to see that has changed over the past couple of decades. Whether it’s ‘Love, Simon’, ‘Love, Victor’ or openly gay performers like Ricky Martin and Adam Lambert, there’s so much more support and representation out there.

Don’t get me wrong, coming out still isn’t easy for today’s generation but I hope that they can find comfort in a show like ‘Love, Victor’. Relating to Victor’s journey, and eagerly waiting to see where it goes in season 2 this summer, will make a lot of closeted gay youths feel like they’re not alone, and who knows, it may even spur them on to be brave and live openly as their authentic selves.

‘Love, Victor’ is available to watch on Hulu in the US and Disney+ in the UK. Watch the trailer for the series below: