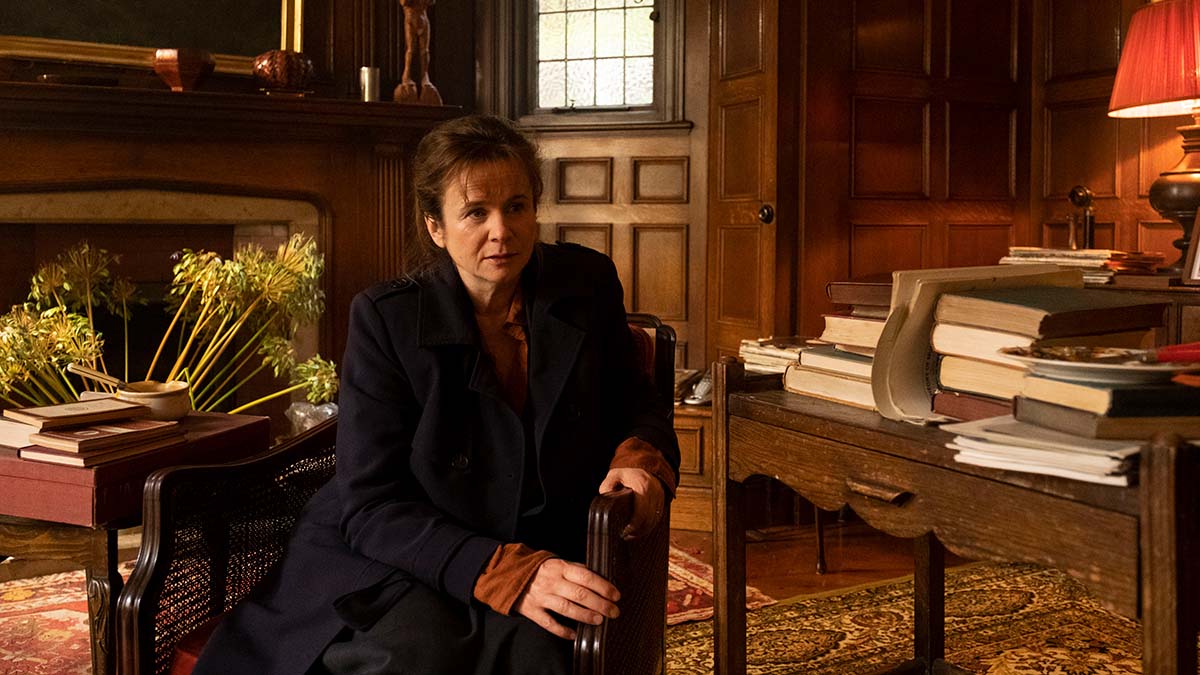 Emma (Emily Watson) made a breakthrough with Connie (Denise Gough) during tonight’s episode of ‘Too Close’.

If you want to avoid spoilers for ‘Too Close’, stop reading this article now.

The episode opened with Emma shouting after a little girl called Abigail who was being led away into a field by Connie. Emma heard a phone ringing in an office and answered it, and it was suggested that Connie was murdering the little girl. Emma then woke up at home in bed.

Next we saw Emma taking some pills and she found a sealed envelope in her bag that she looked at before placing on the table. Taking out her cigarettes, Emma stood by the back door smoking and we saw Connie in her bed lighting the cigarette lighter she stole from Emma.

Emma woke up in her daughter’s room with Si (Risteard Cooper) looking over her. She asked him not to say that the job was too much for her and assured him that she was fine. After leaving the house, Emma went to the crossing where Connie tried to kill herself and the kids to take photos.

Arriving at the facility, Emma brushed off Addy’s (Chizzy Akudolu) request to talk to her about night shifts. Emma got straight to business with Connie by showing her photos of the crossing and urging her to remember anything she can. Connie quipped about how Emma was like ‘Prime Suspects’ Tennyson, and when Emma pressed her to take things seriously, Connie got defensive. Emma’s next tack was to go through Emma’s medical history and hair loss. She pushed Connie to ask if stress had contributed to her hair loss. Connie deflected by asking who ‘Kenneth Baines’ was, the man written on the letter Emma still had in her bag.

A flashback saw Connie trying to avoid a conversation with her mother about sex. Ness (Thalissa Teixeira) turned up distraught on her doorstep saying that her partner had left her. The two women embraced and then Ness took a bath while Connie shared a bottle of wine with her. They were interrupted by Connie’s mother who was shouting for her.

In the session, Connie asked why her mother hadn’t been to visit her. As Emma went to get a glass of water, she spotted the sticker that Connie had stolen from her on the mirror. Emma asked where she had got the sticker from and Connie started listing off all the things she knew about her. As Connie continued to taunt her, Emma pushed back hard and asked Connie what had really happened on the night she almost killed the children. Emma’s outburst led Connie to gloat that she knew Emma had a temper.

While in the park, Emma bumped into an old friend, Dougie, who invited her to a party and asked if she had any children. Emma admitted she had a daughter but didn’t tell Dougie any further details.

Back in session with Connie, Emma apologised for the way she’d behaved in the previous session. She explained that boundaries needed to be clear and professional. Emma then began to probe about Connie’s feelings for Ness and we saw another flashback, this time of Connie cuddling up to Karl (Jamie Sives) in bed. When Connie tried to initiate sex, Karl rebuffed her and commented that he didn’t feel that Connie was the ‘livewire’ she used to be. Connie suggested that it was the anti-depressants that were making her feel numb. When Karl said he felt numb too, Connie asked if he was having an affair. He said he wasn’t but they both admitted that they fancied other people. They kissed and Karl asked Connie if she held a torch for a professor.

Connie told Ness that Karl had proposed that they both take lovers. Ness dismissed the idea as Karl wanting to have his cake and eat it, and when Connie pointed out she was free to be with someone else, Ness either didn’t pick up on her non-too-subtle hint or dodged it. Connie then met Professor Jonathan Hapgood for dinner and drinks, and after she tried to make a move on him. He rebuffed her and told her that he was seeing someone. Connie made her excuses and quickly left.

On her way home, Connie made a tearful call to Karl saying she’d made an idiot of herself. When she got home, Connie asked the kids to turn off their games console and tried to call Ness, who didn’t pick up. Connie went to the bathroom and continued to berate herself over her disastrous date, then watched TV with her daughter. They were interrupted by Connie’s phone ringing, which turned out to an accidental call and Connie could hear Karl having sex with Ness. She raced off to vomit and sat in bed angry waiting for Karl to come home.

When Karl arrived home, he lied to Connie about where he’d been. She saw red and told him she knew he’d been sleeping with Ness. Karl tried to make out that Connie had never been on board with their agreement but Connie said she was angry he’d chosen her best friend.

The revelation surprised Emma and after Connie had finished opening up, she fixated on a kite tangled in the tree outside the window.

Emma sat in her car watching Si, who was unaware. She tried to call him but he didn’t answer, and she saw him meet a woman that he was very over familiar with. Later she met him for dinner and she told Si about the letter she’d received from Kenneth Baines. Emma admitted that she hadn’t read it and Si asked if she had it with her, all the while his phone was ringing. Emma took the letter out and handed it to Si, who opened it and read it. She asked what he wanted and Si said that Kenneth wanted to meet.

Karl finally visited Connie who hugged him tightly while he looked disinterested. Connie said she couldn’t remember where they were in their relationship and Karl said they were at the end. He gave her some magazines and then left. As he walked away, Connie broke down.

In her next session with Emma, Connie was very emotional and said she felt that Karl wished he’d never met her. She confided that she was angry that Karl and Ness had left her out.

Another flashback saw Connie’s mother having her memory tested. She struggled to answer simple questions and the realisation that her mother was suffering from memory loss sunk in with Connie. Once her mother stepped out of the room, Connie burst into tears and told the doctor that she felt very low. The doctor’s response to prescribe her even more pills.

In the session, Connie became emotional again saying she didn’t have the strength to ask for help. She then asked to stop and Emma told her that she’d done really well. Connie again asked who Kenneth Baines was. This time Emma answered and told Connie that he was a lorry driver.

After the session, Emma went to sit outside a block of flats where she watched a man walking past. Was it Kenneth?

While sat in her car, Emma called to have Connie’s father assessed and wasn’t happy that she hadn’t been told about the death of Connie’s mother. She went to see Connie and asked if she remembered that her mother had died six weeks ago. Connie asked if she knew that information and Emma confirmed that she did, and that her mother had taken an accidental overdose of paracetamol. Instead of reacting to that, Connie asked Emma what her daughter’s name was and Emma asked her to keep her daughter out of it.

Connie told Emma that grief ran through every word she spoke, and she got emotional as she described them both as wrecked people. Emma revealed that her daughter was called Abigail. As she left the centre, she looked at the kite stuck in the tree and remembered her daughter.

Emma ignored a call from her husband, stubbed out her cigarette and started the engine of her car. She to the party Dougie had invited her to.

Connie meanwhile tore out the pages of a copy of ‘War and Peace’ and set them on fire in her room.

Read our ‘Too Close’ episode 1 recap

Read our ‘Too Close’ episode 3 preview

‘Too Close’ concludes at 9pm tomorrow night on ITV.

In this article:Denise Gough, Emily Watson, ITV, Too Close